American anti-gay activists play a role in promoting anti-gay legislation around the world.

Like a number of other Caribbean countries, Jamaica retains colonial-age legislation against male same-sex sexual activity. Homophobia is widespread in the country, and hate crimes targeting sexual minorities are common. In a 2004 report, “Hated to Death“, Human Rights Watch noted: “Violent acts against men who have sex with men are commonplace in Jamaica. Verbal and physical violence, ranging from beatings to brutal armed attacks to murder, are widespread.” Jamaica’s current prime minister, Portia Simpson-Miller, has proposed scrapping the anti-gay law. Prior to being elected in 2011, she also stated that no one should be discriminated against because of sexual orientation.

In early December last year, two prominent American and British anti-gay activists attended a conference in Jamaica, urging the Jamaican government to retain its law banning homosexual activity. The conference was arranged by the Jamaican Coalition for a Healthy Society and by Lawyers’ Christian Fellowship, under the title “International Law and the Welfare of the Family”. On the conference website, there is also an article written by Edward Tingley of Canada’s Augustine College, a private, Christian college, which compares respecting homosexual identity with respecting neo-Nazi identity.

“An example to the world”
One of the visiting anti-gay activists, Peter LaBarbera of the Illinois-based group Americans for the Truth About Homosexuality, warned against scrapping the law, telling audience members at the conference that they should not “sit idly by as so-called ‘LGBT activists’ manipulate words and laws to achieve dominance”. He also said he is working on a book on the connection between “homosexual activism and paedophiles”. In an interview with the Jamaican broadsheet The Gleaner, LaBarbera stated his belief that Jamaica could “stand up and not bow to the pressure (to revoke its’ anti-gay law)”, and thus serve as “an example to the world”. Also attending the conference was Andrea M. Williams of the British group Christian Concern, who said:

Might it be that Jamaica says to the United States of America, says to Europe, “Enough! You cannot come in and attack our families. We will not accept aid or promotion tied to an agenda that is against God and destroys our families.”

She added: “If you win here, you will have an impact in the Caribbean and an impact across the globe.”

The participation of LaBarbera is part of a larger trend. “As American groups opposed to LGBT rights are increasingly finding American audiences less receptive to their message, they are moving instead to spread their noxious propaganda overseas,” Heidi Beirich of the Southern Poverty Law Center stated in a recent interview. Indeed, American anti-gay activists have been active in a number of countries, supporting anti-gay legislation. One example is the tiny Central American country of Belize, where the Arizona-based Alliance Defending Freedom and other groups are working in support of a law criminalizing gay sex. In a report, the SPLC notes how arguments used by U.S. anti-gay activists have spread to Belize:

One of the more remarkable aspects of the battle in Belize is the degree to which the anti-gay rhetoric now employed there has been lifted directly from anti-gay propaganda developed by the Christian Right in the long battle over gay rights in the United States. That was not always the case, Belizean LGBT-rights activists told the SPLC in a series of interviews last year. Belizean culture was certainly unfriendly to gay people, these activists say, but the now-frequently brandished propaganda, such as the oft-repeated idea by Section 53 supporters that gay men are recruiting children and that they are pedophiles, has been imported from the American anti-gay movement. 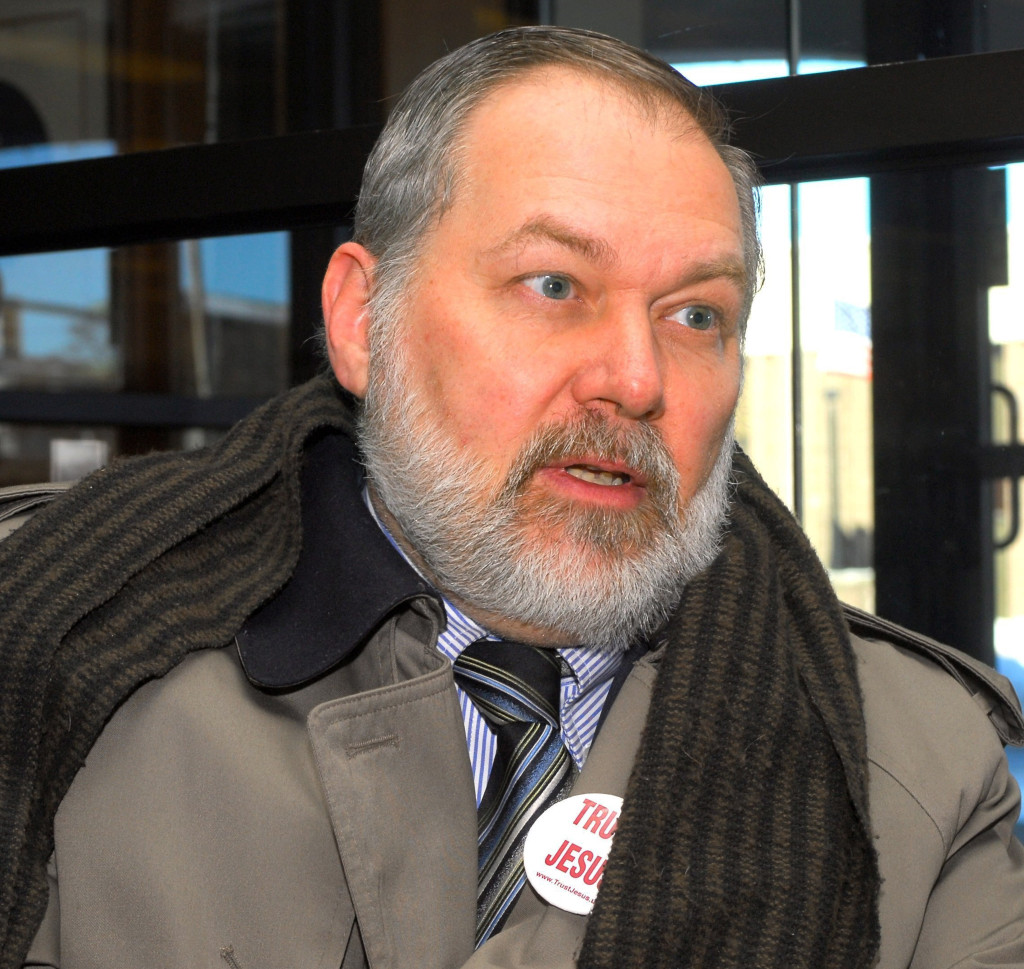 In this Jan. 10, 2011, file photo, Massachusetts-based evangelist Scott Lively is seen during an interview at the Springfield Republican newspaper offices, in Springfield, Mass. The Center for Constitutional Rights filed a lawsuit against Lively in Federal Court in Springfield on March 14, 2012, alleging that he has waged a decades-long campaign to persecute gays in Uganda. (Photo: AP Photo/Springfield Union News, Mark Murray. Copyrighted.)

One of the most internationally active anti-gay activists is Scott Lively, who has also worked together with LaBarbera. Lively is a missionary and author who first came to light as an anti-LGBT activist in the early 1990s in Oregon, where he was a prominent spokesman for the strongly anti-gay Oregon Citizens Alliance. In 1995, he coauthored The Pink Swastika: Homosexuality in the Nazi Party, a book alleging that “‘homoeroticism’ [was] the very foundation of Nazism”, and that this is kept secret by a “conspiracy of silence – a nearly universal self-censorhsip by the same opinion-makers who mock conspiracy theories”.

In 1997, Lively followed up with The Poisoned Stream, a book which once again connected homosexuality with Nazism, and went on to describe it as “a dark force” throughout history.

Since then, Lively – who currently resides in Massachusetts – has been travelling widely to spread his anti-gay gospel. In 2009 he went to Uganda to address a conference held at the Triangle Hotel in the country’s capital, Kampala. The conference, which was titled “Exposing the Truth behind Homosexuality and the Homosexual Agenda”, was attended by thousands of Ugandans, including religious leaders and government officials. The organizer, Stephen Langa of the Family Life Network, said that the conference looked at the “gay agenda – the whole hidden and dark agenda”. On his own blog, Lively wrote:

[Langa] was overjoyed with the results of our efforts and predicted confidently that the coming weeks would see significant improvement in the moral climate of the nation, and a massive increase in pro-family activism in every social sphere. He said that a respected observer of society in Kampala had told him that our campaign was like a nuclear bomb against the “gay” agenda in Uganda. I pray that this, and the predictions, are true.

It was not his first visit to Uganda. As the SPLC reports, Lively first went there in 2002, to speak on the threat from “globalists who use the sexual revolution and the Planned Parenthood Federation and the global homosexual movement” to accumulate power and control population.

Only weeks after the 2009 Kampala conference, a previously unknown Ugandan politician – David Bahati – proposed legislation broadening the criminalization of same-sex relations in the country. The proposed law received massive international attention, as it called for the use of capital punishment against “aggravated homosexuality”. The organizers of the conference contributed to drafting the bill.

When Lively came under fire for his role, he stated that he was very disappointed that the legislation was so harsh. In the 2010 documentary Missionaries of Hate, however, he told journalist Mariana van Zeller that it would be the lesser of two evils to allow the bill to go through, as the alternative would be to allow “the American and the European gay activists to do to that country what they have done here in the United States”. Lively has since been sued by a Ugandan LGBT group, while the law – in an amended version that replaces capital punishment with life in prison – was recently passed by the Ugandan parliament. The Ugandan president has blocked the bill, pointing to parliamentary technicalities, as well as to his belief that “homosexuals are sick and need help”.

Lively has also travelled to a number of Eastern European countries, amongst them Moldova, which he visited in 2011 to campaign against an anti-discrimination law. After Russian president Vladimir Putin signed a bill outlawing “homosexual propaganda”, Lively expressed pleasure and support. In an interview with with NBC News, he also claimed credit for influencing the lawmakers. In a radio interview with Bryan Fischer of the American Family Association, he described Russia as “a beacon of freedom” under Putin’s leadership, and said that the United States had descended into “a gay version of the Soviet Union”. On his blog, Lively posted an open letter to Putin, and claimed that he would send him the first Russian translation of The Pink Swastika.

LaBarbera, too, has praised the law, stating: “Russians do not want to follow America’s reckless and decadent promotion of gender confusion, sexual perversion and anti-biblical ideologies to youth.”

Charity raided in al-Qaeda hunt
From Sinai, with hate

The Turkish charity Humanitarian Relief Foundation (IHH) has been accused of smuggling weapons in support of al-Qaeda in Turkey. Lars...