As the American election nears, each day brings fresh news of territorial losses by the Islamic State (ISIS) in the center of its Caliphate, Mosul. As the coalition of Iraqi Army soldiers, Kurdish Peshmerga and Shia militias advance quickly against nearby villages and enter the outskirts of the city buoyed by American air support, it is tempting to believe that a dramatic defeat of ISIS may finally be close at hand. And yet, striking parallels between the Mosul offensive and the battle to retake the Libyan city of Sirte, ISIS’ de facto capital in North Africa, may suggest otherwise. 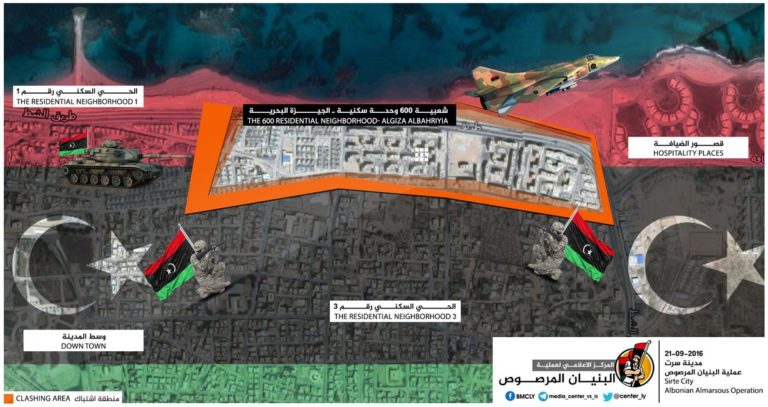 This map, published by Bunyan Marsus in September, still closely reflects the situation in Sirte.

In Sirte, the Misratan-led Bunyan Marsus (BM) forces aligned with the UN-backed Government of National Accord (GNA) have been fighting to seize control of the city from ISIS since May 2016. Since the start of that offensive, they have been supported by a smattering of American, British, and French Special Forces who have been essential for reconnaissance and battle planning.

After the BM forces got bogged down with months of stiff urban warfare, they requested American air strikes, which began on 1 August. Although large swathes of the city were reclaimed both before and after the bombardments, the fighting has now ground to a halt. As of early November, the remaining ISIS fighters are said to number no more than 200 and are hemmed into an area of Sirte measuring only one square kilometer in size.

So, why has a knock-out blow been so difficult to deliver in Sirte, and what lessons can be learnt to help avoid the same war of attrition taking place in Mosul? Most American military planners dismiss that this comparison is relevant contending that because the allied forces ranged against Mosul and the number of jihadis opposing them are both orders of magnitudes larger than those fighting in Sirte that no applicable lessons can be drawn. Discounting this valid issue of scale – and putting aside the sectarian and ethnic dimensions present in Iraq, yet absent in Libya – the two battles are actually comparable in many instructive ways.

Lessons from Sirte
Firstly, the densely-populated urban environment in Sirte has meant that US airstrikes could only achieve limited results in degrading ISIS positions out of extreme concern to avoid friendly fire incidents or collateral damage. The fact that only 356 airstrikes have been launched in three months speaks volumes to this caution. All indications suggest that given the political and sectarian sensitivities surrounding the Mosul battle that the US will be even more cautious. As BM forces have slowly seized areas once controlled by ISIS they have discovered extensive networks of tunnels and barricaded defenses, while their progress has been slowed by booby-traps, IEDs, and mines. These urban guerilla tactics have lengthened the battle for Sirte and have thus far prevented a definitive victory for BM forces. Mosul is a much larger city than Sirte and has been held by ISIS for much longer therefore this problem will likely only be magnified; victory will almost certainly be secured through close-quarter fighting on the ground, therefore exactly who is fighting and their precise motivations is of the utmost significance.

Secondly, in Sirte as in Mosul, the anti-ISIS coalition comprises diverse factions who have a shared interest in driving ISIS out of the city, yet have potentially conflicting interests over what happens once it has been ‘liberated’. Although most of the militias who make up BM forces are Misratan, some are hardline Islamists who fight for the same cause as the GNA only because it is temporarily convenient, while others are more consistent allies to the GNA who seek to stake their claim to power through the championing the existing political system. Indeed, the offensive began as a knee-jerk reaction by Misratan militias to ISIS territorial incursions west of Sirte. Only after the offensive was initiated by Misratan militias, did the GNA claim it as its own. At no moment was it a well-planned out military operation controlled by a genuine anti-ISIS political coalition. This lack of a stable political coalition has meant that as victory in Sirte has become ever closer, the rifts and divisions between different militias and political factions within the anti-ISIS coalition have deepened.

So, while it may seem a momentous achievement that the Iraqi government troops, Pershmerga forces and Hashd al-Shaabi Shia militias are currently all fighting under one banner against ISIS in Mosul, without a sustainable political coalition to unite them, approaching victory Mosul from ISIS has the potential to unleash greater chaos, conflict and instability instead of vanquishing it. In fact, such tensions might well undercut efforts to push towards the finish line.

Finally, the Misratan militias did not finally decide to takeover Sirte because they wanted to defeat ISIS’ violent jihadi ideology, but rather because they wanted to assert their own power within Libya and regain control over lost territory. Viewed through this lens, it is possible that BM forces are unwilling to launch their final blow against ISIS in Sirte because the political climate is no longer such that they will be assured greater political or territorial power should the fight come to an end. Furthermore, it is also possible that prolonged pauses in the fighting may have been deliberately engineered to let ISIS fighters escape Sirte in order to make it easier for the Misratans to take the city.

Although, these tactics make the Western objective of dealing ISIS a knockout punch much more difficult, they are convenient for troops on the ground who wish to retake territory and score symbolic gains without having to fight to the death against a cornered snake. Indications suggest that this is beginning to happen in the Mosul offensive by launching the first assault exclusively from the East. By not attempting to first surround the city and by allowing humanitarian corridors, it is possible Iraqi forces are deliberately facilitating the escape of ISIS fighters.

In Libya as in Iraq, ISIS’ rise is a symptom – and not the cause of the current conflict. Therefore, viewing the battle for Sirte as a purely military counter-terror operation that can be treated separately to the Libyan political context is not only intellectually false, but also incredibly dangerous. The same applies in the battle for Mosul. Our study of the fight against ISIS in Libya suggests that Western efforts to put military gains before political coalition building in Iraq are likely to backfire in the medium term.

Jason Pack is the founder of EyeOnISISinLibya.com, president of Libya-Analysis and the North Africa Analyst at Risk Intelligence. He holds an M.St. in Global and Imperial history from St. Antony’s College, Oxford University and is currently on a leave of absence from his position as a doctoral student at Cambridge University. His media output consists of over a hundred op-eds and news analysis articles in The New York Times, The Wall Street Journal, The Financial Times, The Spectator, The Guardian, Foreign Affairs, Foreign Policy and other top outlets in over fifteen countries. Jason’s advisory work has consisted of frequent meetings with the MoD, FCO, DoD, State Department, NATO and the UN.
View all posts by Jason Pack →

Rhiannon Smith is HSI's North Africa editor, as well as the managing director of Libya-Analysis and deputy director of EyeOnISISinLibya.com. Rhiannon holds an MSc in Development Management from the Open University and a BA Hons in Arabic with French and Persian from the University of Exeter. She regularly contributes articles and opinion pieces on Libya and the MENA region to news outlets and thinktanks including Al Jazeera English, the Middle East Eye and the Royal United Services Institute
View all posts by Rhiannon Smith →

Belgium’s problem with extremism
Divided We Stand, United We Fall

NEWS ANALYSIS: When extremist Islamism in Belgium is discussed, news media tend to focus on the Brussels neighbourhood of Molenbeek....