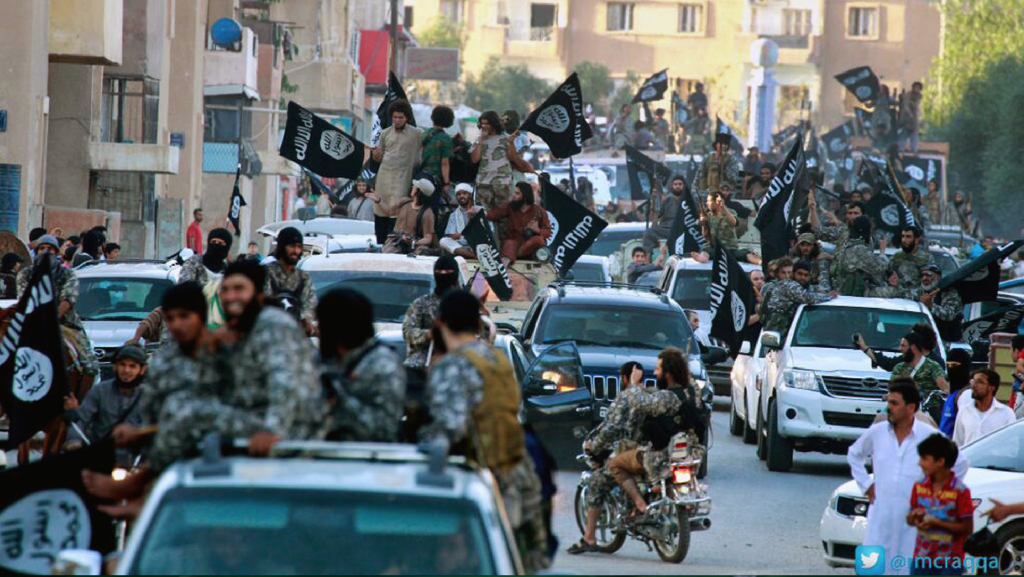 STRONGHOLD: The Syrian city Raqqa is the stronghold and the operational headquarter of the Islamic State (IS). Here an IS parade in Raqqa in June 2014. PHOTO: Raqqa Media Center (IS controlled entity)

The Islamic State has an extensive counterintelligence network that seeks to ferret out locals attempting to pass information to the U.S.-led coalition that has launched airstrikes against the extremist group’s forces, the reporters have learned.

IS has installed advanced monitoring software on computers in the Internet cafes, including keystroke software that records everything users type.

Anyone trying to log on with their own computer at an Internet café also risks being detected by so-called IP sniffers, which can detect the IP (Internet protocol) number of any computer or server, and thereby also their geographic location.

When installing the monitoring software in the Internet cafes, the IS patrols force everyone to leave the premises so they cannot see what the IS agents are doing, HSI reporters have witnessed.

IS has also installed a large number of street cameras to detect anyone trying to take pictures with cell phones or cameras.

Reliable sources close to IS also say the organization has also started using drones to monitor the populations of cities under its control, as well as for military recognizance. The sources spoke on the condition of anonymity for their own safety.

The sources also claim that organization has recruited children as spies and informants to report infractions against IS orders by residents of the cities.

Read more: Child warriors in the battle for Kobani

Local IS commanders have imposed extreme security measures after a failed U.S. hostage rescue attempt in early July that was followed by a U.S.-led military campaign that includes airstrikes targeting IS strongholds and leaders, the sources say.

Preceeding the US hostage rescue attempt in Syria, the religious leader of IS, or caliph, Abu Bakr al-Baghdadi, had repeatedly disguised himself as a burka-clad woman to avoid detection by U.S. satellites, airplanes and drones.

Read more: The quest for the caliph(ate)

Local sources tell HSI that IS military command posts since early July have been moved from military bases and to heavily-populated areas, such as in Raqqa, as a shield against airstrikes.

The sources claim that foreign hostages are also held in heavily populated areas, but never for long at the same location. In order to avoid security breaches and leaks, many local IS fighters are not told who or what they are guarding. Only a trusted few are briefed on sensitive matters.

According to sources close to a local IS commander, IS recently executed at least four of its members because they were accused of communicating with Free Syrian Army (FSA), which was formed in 2011 by deserters from the Syrian government army. One of the IS soldiers was from Raqqa. Another was from Hasakah in Syria. All four men were killed at a mountain location near the Al-Itihad university, the sources claimed.

New IS child army
Yemeni fury over US raid