ANALYSIS: The far right in Hungary has gained a lot of attention in the European media in the last few years – but its transformation has received little notice. 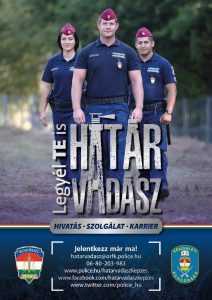 “Be a border hunter” – official recruitment message of the Hungarian police.

A few years ago the most radical rightist party in Hungary was unquestionably Jobbik, which spread harsh anti-Semitic and anti-Roma rhetoric and cultivated an extensive network of paramilitary satellite organizations. Its rival for conservative hearts and minds was Fidesz, a mainstream party of government which sold itself as a more centrist force. When the leader of Fidesz, Viktor Orbán, was re-elected prime minister in 2014, he held an international press conference to guarantee that neither the far left nor the far right would have an important voice in Hungarian politics.

The picture today is totally different. Jobbik has shifted considerably towards the center and downplayed its radical rhetoric, targeting a broader electorate, including even left-wing voters. Fidesz – the government party – has radicalized its rhetoric and actions.

Jobbik has taken major steps to distance itself from fascism and from the blatant anti-Semitism it was known for just a few years ago. In December the party leader even sent Hannukah greetings to the Hungarian Jewish community. The party that burned EU flags at a rally only five years ago recently launched a European political programme that included a proposal to deepen integration in several fields and create a “European wage union”. The party that has had extensive ties with Russia seems to be slowly abandoning this line and has launched a “Western opening” to improve its relations with Western European countries and the United States. 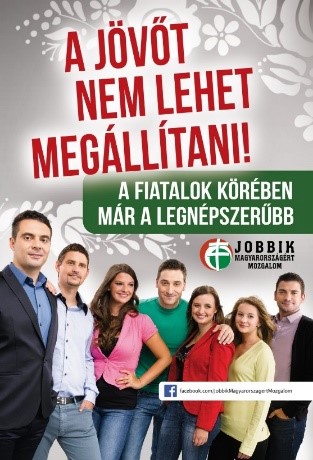 “The future cannot be stopped – already the most popular among young people.” Jobbik campaign billboard, 2014.

Jobbik remains marginalized internationally, and is still excluded from the far-right ENF group in the European Parliament, since Marine Le Pen’s group finds it too extreme. But Jobbik’s attempted makeover has not gone unnoticed by its former extremist allies. In January, some members of the former Hungarian Guard paramilitary organization protested against Gábor Vona (one of the founders of the Jobbik movement), asking him to return the vest of the Hungarian Guard he wore on his parliamentary inauguration back in 2010.

Fidesz is moving the opposite way. Once one of Russian President Vladimir Putin’s fiercest critics, Viktor Orbán is now a supporter. Orbán, who a few years ago took pride in his role as an EU vice president and called for a “strong Europe”, now insists that policies designed in Brussels are the biggest threat Hungary faces. The party that launched a policy of opening towards Muslim countries a few years ago now uses strongly Islamophobic rhetoric. Orbán himself has openly claimed he does not want any Muslims in Hungary. The government ran a xenophobic anti-migrant campaign for months, spending millions of euros, and Orbán has also stated that protecting “ethnic homogeneity” is vital for economic success, because “too much mixing causes trouble”. While Islamophobia has become Orbán’s ideological stock in trade, however, his family maintains business interests in Turkey and Saudi Arabia.

The strategies of the two parties are based on opposing projections of the future: Orbán is betting that the Western political mainstream will collapse (a view strengthened by the UK’s referendum vote to leave the EU and the election of US President Donald Trump), while Vona believes the mainstream is strong and the West will survive. Orbán thinks the world is undergoing a radical transformation that calls for radical responses, while Vona sees moderation as the key to political success.

Jobbik, to be sure, is not free of extremist elements, but the extreme right is no longer the only source of hate speech. Orbán, the most radical politician of his own party, delivered a State of the Union speech recently that Cas Mudde,  a Dutch expert on European radicalism, characterized as a genuine right-wing populist manifesto.

Orbán’s government has been busy erecting a fence on the country’s southern border, deploying the military against refugees at the borders and, more recently, deciding to keep refugees detained in shipping containers while their asylum applications are pending. The Hungarian police have even recruited border guards from the general population and called them “border hunters”.

In many European countries, centrist parties have had trouble staving off electoral challenges from far-right forces. In Hungary, the solution to this problem was pretty simple: the main governing party itself became a far-right force.

Péter Krekó is the director of Political Capital Institute, a Budapest-based Central European political research and consultancy firm. He is also a visiting professor at Indiana University's Central Eurasian department and a member of the of the EU Radicalisation Awareness Network Centre of Excellence pool of experts.
View all posts by Péter Krekó →

New report on the Boko Haram
New report: AQAP functions as a death squad for hire

New report on the Boko Haram

A new report from HSI discusses the history and evolution of the Nigerian extremist group Boko Haram. Boko Haram –...