“The night I was evicted from my home and my land was the worst night of my life. I will never forget it,” says Abu Solaiman, one of many Coptic Christian victims of sectarian discrimination in Egypt in recent years. 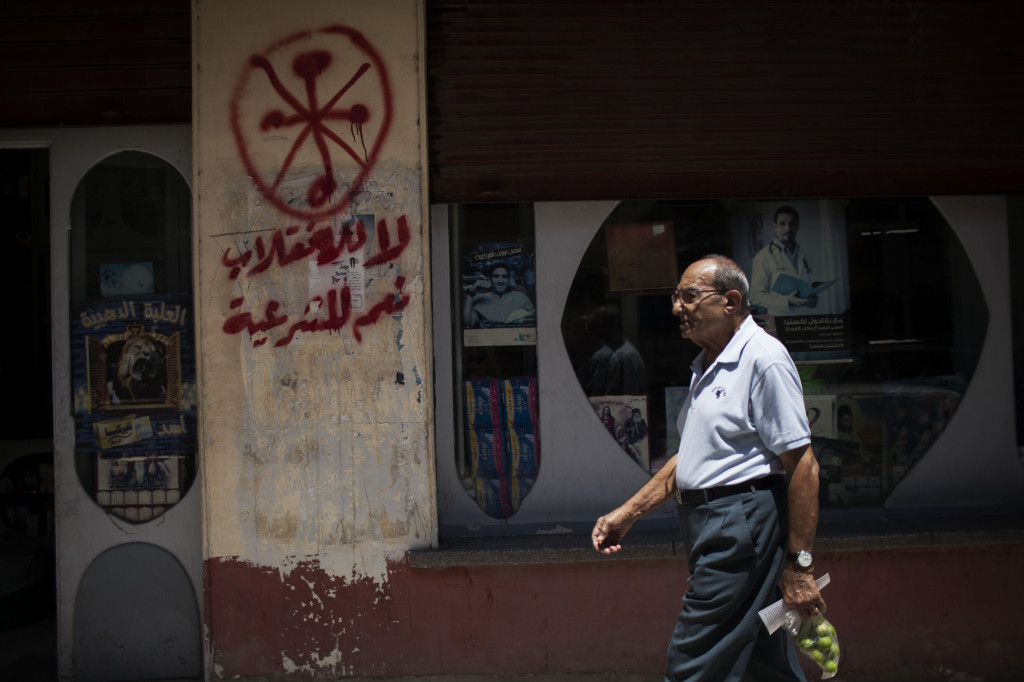 In this photograph from August 2013, an Egyptian man walks in front of a pharmacy marked with anti-Coptic and anti-coup graffiti in Assiut, Upper Egypt. Arabic graffiti reads, “No to the coup and yes to legitimacy.” Following the coup that ousted Egypt’s first democratically elected president, Mohamed Morsi, Islamists widely blamed the Coptic minority in the country.
(Photo: Manu Brabo/AP/Scanpix. Under copyright).

It happened in February two years ago, in the village of al-Sharbat in the directorate of Alexandria in Northern Egypt: Solaiman Bashkaroun Abu Solaiman, a home appliance merchant, was evicted with his extended family of 25 because of what he describes as a problem he had nothing to do with.

In late January, rumours began circulating in the village that a young man of Coptic Christian background was having an affair with a Muslim girl. The rumours quickly escalated, and led to violent clashes; three people were injured, and three houses and one car set on fire – all of them owned by Copts.

Abu Solaiman leans against the wall in his simple, three-storey home, recalling the events of that day. The Coptic youth at the centre of the controversy had left the village two days earlier, he says, “but despite that, gunshots were fired and the police did not intervene until the next morning.”

Troubled times
These were troubled times in Egypt, which faced a security collapse after the January 25 revolution.

However, a would-be reconciliation meeting was arranged between Coptic and Muslim village residents, under the sponsorship of Salafists and the Muslim Brotherhood, and with the attendance of a church pastor. The meeting ruled for the displacement of eight Coptic families from the village “until things returned to normal”. The decision was met with strong objection from rights groups and NGOs working with religious minority rights in Egypt, but Abu Solaiman, his four children and his grandchildren – 25 people in all – had to leave their village to live with another Coptic family a few miles off.

Abu Solaiman is silent for a moment after recounting the events, then lets out a sigh. “We had to stay there for over a month,” he says. “I left my land, my home, all of my possessions. We were evicted forcibly and unfairly from the village, although we were not a party in the dispute, nor were we in any way connected to it.”

He says that many Muslim residents of the village supported his account and objected to the decision. But the committee –  denoted in the media as the Council of Wise Men – did not listen.

“Thank God it has passed”
His eldest son, Fawzi, who is 35 and works in an oil refinery, joins the conversation. He speaks calmly: “We were not a party in the crisis, and yet we were made homeless. Where is the law? Why was it not implemented? The Islamic faith does not condone our displacement.”

He says that his family got along well with the Muslim village residents before the eviction, and that most of them were customers of his father’s store. “We had never had any problems before,” he says. “Thank God it has passed.”

The events in al-Sharbat sparked debate in Egyptian society, and media pressure led to a review of the case by a committee of parliament members. In March 2012, the committee rescinded the decision to evict Copts from the village. According to Fawzi, however, neither the family of the young Copt nor the family of the Muslim girl he was said to have had affair with has returned to the village. He says they fear for their security.

“A deeply rooted problem”
Sectarian violence and religious discrimination is nothing new in Egypt. As noted in a 2010 International Religious Freedom Report by the U.S. State Department – a report issued while Hosni Mubarak was still in power – both Christians and members of the Bahai faith faced “personal and collective discrimination”, and the government “failed to prosecute perpetrators of violence against Coptic Christians in a number of cases”.

However, sectarian violence reached its height in August 2013. In late July, the popularly elected president, Mohamed Morsi of the Muslim Brotherhood, was ousted. In August, the violent dispersal of two pro-Brotherhood sit-ins was followed by four days of anti-Coptic violence; dozens of Coptic churches were set afire, others looted. A report by Human Rights Watch, the international NGO, concluded that at least four people were killed, three Copts, one Muslim.

“For weeks, everyone could see these attacks coming, with Muslim Brotherhood members accusing Coptic Christians of a role in Mohamed Morsi’s ouster, but the authorities did little or nothing to prevent them,” said Joe Stork, acting Middle East director at Human Rights Watch. “Now dozens of churches are smoldering ruins, and Christians throughout the country are hiding in their homes, afraid for their very lives.”

According to Kamal Zakher, the founder of the Coptic Secular Front, Morsi’s ouster put Copts in an untenable position. “The anxiety of Copts is not related to a person, it is related to the resolve of extremist organization to impose their will on the Egyptian street,” says Zakher. His organization focuses on the threat of extremism, but he believes the Copts face a deeper community problem “rooted in a society that perceives Christians as inferior”.

The role of satellite TV
Naguib Gabriel, head of the Egyptian Federation for Human Rights, tells HSI that hardline religious-oriented media have played a major role in inciting hatred against Copts, both directly and indirectly. He says satellite TV channels have “poured gasoline onto the fire”, and have promoted anti-Coptic violence. He points to the events in al-Sharbat as one example.

Activists have filed complaints with the attorney general against the owners of several TV channels. However, most of them reportedly have gone uninvestigated.

The owner of the al-Ummah channel, a radical fundamentalist who goes by the name of Abu Islam, has been convicted on charges of contempt against religion after publicly tearing up a Bible during a demonstration outside the US embassy on 11 September 2012, in reaction to the infamous Internet video “Innocence of Muslims”. It was the first time an Egyptian court has convicted a defendant for contempt of the Christian religion.