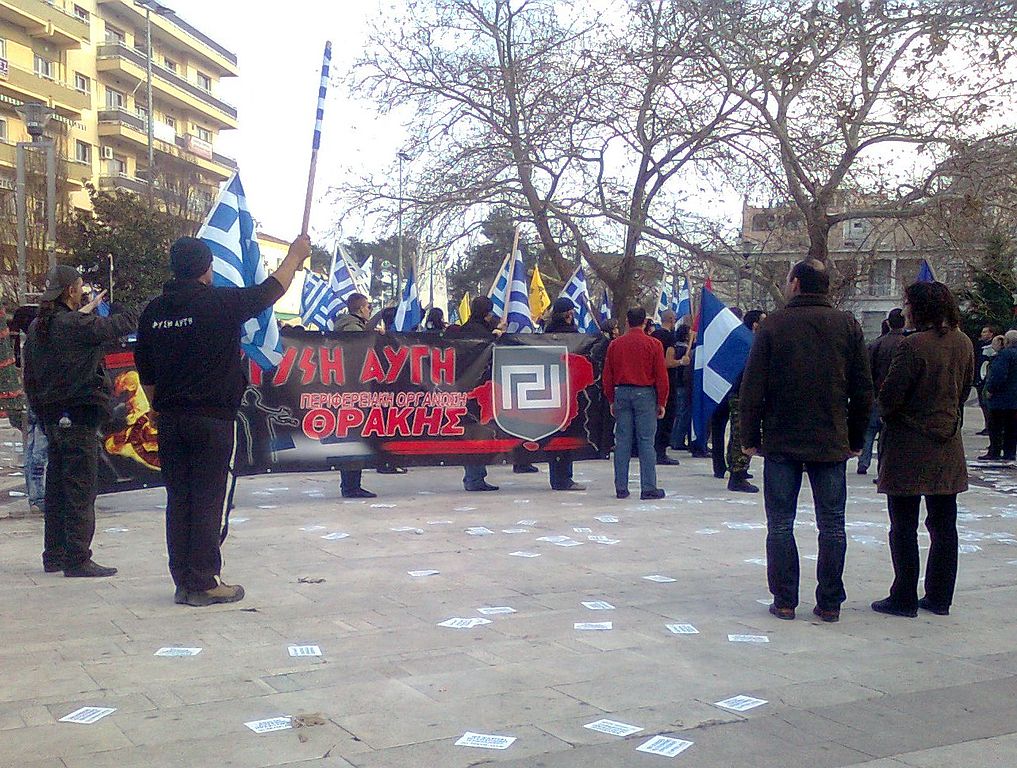 Anti-Semitism, violence and belief in an “absolute and genuine” nationalist revolution are central to the Greek extreme right-wing party Golden Dawn. HSI looks at its past and speaks with Greek investigative journalist Dimitris Psarras.

In a recent article, the political scientist Antonis A. Ellinas of the University of Cyprus states that the “late-democratized Southern European countries were thought to resist the rise of far-right parties observed elsewhere” in Europe. Thus, the electoral breakthrough of Golden Dawn (Chrysi Avgi in Greek, or CA) in Greece’s 2012 elections “took many by surprise”.

The party – which received merely 0.29 per cent of the vote in the 2009 elections, or less than 20,000 votes – rose to almost 7 per cent in the May 2012 elections. Many expected voters would desert the party in the June elections, but the party secured 6.92 per cent. Subsequent polls have shown the party reaching 11-12 per cent.

As Ellinas notes, it is is important to take account of both official party documents and the public rhetoric, writings and activity of party leaders to understand the ideology of the Chrysi Avgi: “Approaches that focus solely on the former are likely to miss much of what has granted [CA] the stigma of a neo-Nazi political formation.” In its statutes, the CA opposes the Greek bailout agreement, but also opposes “demographic alteration, through the millions of illegal immigrants, and the dissolution of Greek society, which is systematically pursued by the parties of the establishment of the so-called Left.” It embraces nationalism as “the third major ideology of History” and seeks to build “a state grounded and built on this ideology that nurtures and guides individual and collective life”, and states: “Nationalism is the only absolute and genuine revolution because it pursues the birth of new moral, spiritual, social and mental values.” Golden Dawn “does not intend to rescue anything from the established economic and social interests that lead the Nations, the People and the Civilization in decadence.”

In short, the Chrysi Avgi is a textbook example of Roger Griffin’s definition of fascism, “a revolutionary form of nationalism, one that sets out to be a political, social and ethical revolution, welding the ‘people’ into a dynamic national community under new elites infused with heroic values. The core myth that inspires this project is that only a populist, trans-class movement of purifying, cathartic national rebirth (palingenesis) can stem the tide of decadence.”

It does, however, reject the National Socialist or Nazi label often used to describe it, even while party documents make little secret of an ideological lineage from interwar fascism.

One of the few in-depth studies of Chrysi Avgi is the book The Black Bible of the Golden Dawn (Η μαύρη βίβλος της Χρυσής Αυγής), a book which – according to its publisher, Polis – is soon to be published in English and French. HSI has spoken to its author, the investigative journalist Dimitris Psarras. “Chrysi Avgi first appeared as a magazine in December 1980. Its ideology was strictly German national socialism, and the articles in the magazine were all inspired by Hitler, Goebbels, Rosenberg, et cetera. At first, the organization was kind of an ‘inner circle’ of Nazis and had very few activities in the streets,” Psarras says.

He describes the party leader, Nikolaos Michaloliakos, as a former pupil of Konstantinos Plevris, a notorious right-wing extremist, Holocaust denier and author of the strongly anti-Semitic book Jews: The Whole Truth.

In the mid-1980s, however, Michaloliakos went on to form the Chrysi Avgi as a political organization. “It began the attacks against political opponents – leftists, anarchists, internationalists – and transformed to a political party, without giving up street violence,” Psarris notes.

– In English-language media, Chrysi Avgi is occasionally described as a neo-Nazi party. Is this description accurate, perhaps outdated or an oversimplification? Where could one place Chrysi Avgi in relation to other extreme right-wing groups across Europe?

“It is absolutely accurate to describe them as a Nazi group. It is the only European party with this kind of ideology and practice that has this kind of electoral success. It is far more extreme than the British National Party or the German NPD.”

– And yet it has been growing immensely in the last few years. Have they gone through a “moderation” process, making it more palatable for the Greek electorate?

“No, there has been no such ‘moderation’. It is not easy to describe their increased success, but it is a combination of the growing social crisis in Greece, and the collapse of the Greek political system. People who vote for the CA are of course not all Nazis, but they seek a revenge against the ‘system’, and as a weapon for such a revenge they need an extremist organization. It is important to understand the state of urgency in Greece, with rates of unemployment over 30 per cent, and amongst younger people over 50 or even 60 per cent unemployment. The voters of the Chrysi Avgi are helpless, desperate people.

“In addition, the mainstream parties have made many mistakes, helping the Chrysi Avgi to become a considerable political power. The first mistake was the three-party government of Loukas Papadimos at the end of 2011. PASOK and New Democracy accepted the far-right party LAOS as partners. The message given to the voters was that right-wing extremism can be a positive factor for national stability. LAOS voters, who were disappointed by the ‘mainstream turn’ of LAOS, turned towards Chrysi Avgi. The second mistake was the imitation of the anti-immigrant political agenda of the Chrysi Avgi by the two mainstream parties before the May 2012 elections. The real winner was the extremists, not the mainstream parties.

– What is the relationship between the party and violence?

“Violence is the main goal of the Chrysi Avgi. It is not merely a political means to achieve a goal, it is the end. Every night we see attacks against immigrants, and the victims always describe men with black shirts and the trademark of the Chrysi Avgi. Of course, they deny any relation. And when members of the party are caught red-handed, the party says that they are not members or that their involvement is a result of a plot from the police or from their political opponents.

“Their leaders speak of a ‘civil war’ in the country, a war between ‘real Greeks’ on one side, and the ‘anti-Greeks’ – immigrants, leftists, intellectuals, gays – on the other.”

– In Western Europe, one could describe a shift in the ideology of the far right, away from outspoken anti-Semitism, towards a general opposition to immigrants, and increasingly with an anti-Muslim focus. Has there been a similar ideological development in Greece?

“The Chrysi Avgi is strictly anti-Semitic. It is a very characteristic feature of the party, and even today, when it targets Muslim immigrants, party propaganda focuses on the Jews. 80 per cent of Greek Jews were murdered during the Holocaust. Today we only have 10,000 Jews, but the Chrysi Avgi is attacking even them as the source of all evil. The recent manifesto of the Chrysi Avgi expressed admiration for Muslims as the only ones to combat the ‘Jews and Zionism’.”

Psarras points out that the Lebanese extremist group Hezbollah is hailed as an example to emulate.

– With such open extremism, what can be said about the international connections of the Chrysi Avgi today?

“The party has had contacts with extreme right-wing movements in other countries from the very beginning. Even Vladimir Zhirinovsky invited them to Moscow in 1996, when he planned his Fascist International, the Patrintern. More recent contacts have been made with the German NPD and with the more extreme Freies Netz Süd, as well as with the Romanian Noua Dreapta and the Italian Forza Nuova. Members of all these organizations were invited to the annual manifestation of the Chrysi Avgi in Athens in February 2013. The Chrysi Avgi also has contacts with Casa Pound in Italy, and with the Spanish Movimiento Social Republicano.”

With the political and economic power the party has have gained as a result of the last elections, it is now trying to build a new international network.

Antonis A. Ellinas, The Rise of the Golden Dawn: The New Face of the Far Right in Greece, South European Society and Politics

A “complex” Dawn in Athens