Arslan Ubaydullah Hussain, a central activist in the Norwegian Islamist group Profetens Ummah (The Ummah of the Prophet) has been convicted in Oslo District Court of making threats and hate speech. 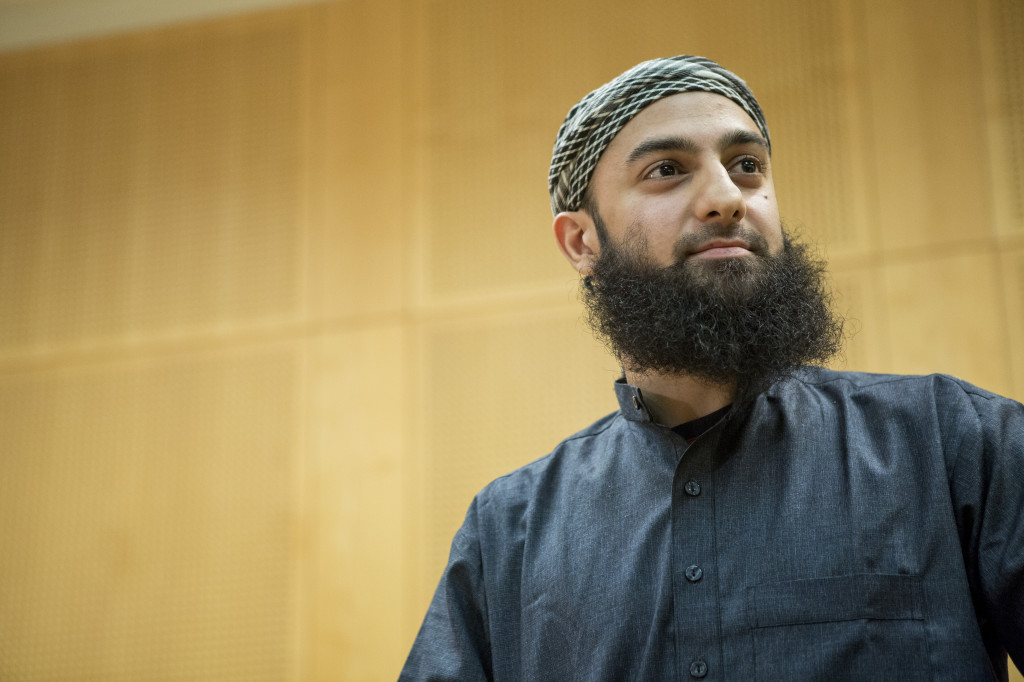 Lia was threatened in connection with an earlier court case against Najumuddin Faraj Ahmad, better known as Mullah Krekar, in which Lia had been an expert witness. In a break in the proceedings, Hussain allegedly called Lia a “swine” who would “burn in hell and in this world. Inshallah (Allah willing), Muslims will take responsibility”.

Both Johnsrud and Foss received emails attributed to Hussain in October 2012 in response to articles focusing on extreme Islamists active in Norway. Hussain was accused of writing in an email to Johnsrud that her article had not been well received, and that she should not be surprised if someone reacted with words or actions, “This is no threat, merely useful information for yourself”. Foss received a similar email, stating that he should be worried about his own safety and that he would be easy to track down. Once again, the email believed sent by Hussain said it was not intended as threat but was just information on “what could happen”, adding that if something did happen, the writer would “smile all the way to the funeral”. 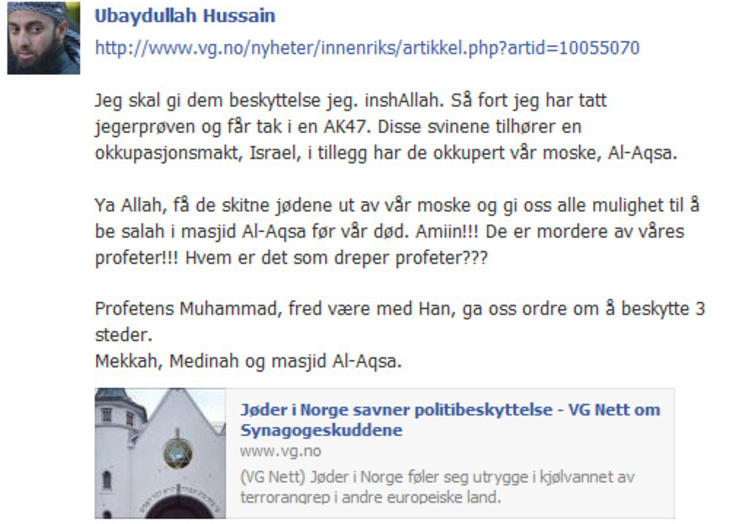 One of the Facebook comments attributed to Arslan Ubaydullah Hussain that lead to his which conviction for hate speech.

The Oslo District Court ruled that the emails were clearly intended to be threatening. Hussain was also convicted of hate speech for a comment posted on Facebook in October 2012 in response to an article about Norwegian Jews calling for police protection, “I will give them protection, Inshallah. As soon as […] I can get hold of an AK-47 (automatic rifle). These swine belong to an occupation power, Israel, and have additionally occupied our mosque, al-Aqsa. Oh Allah, get the filthy Jews out of our mosque”. The post went on to say: “They are real swine and must be fought. It is a pity that the brother that shot against the synagogue in 2005 or 2006 did not hit anyone”, referring to a 2006 shooting at the Oslo synagogue.

Earlier that month, Hussain had been interviewed by the Norwegian weekly newspaper Morgenbladet, and was quoted as saying that he would understand an attack against Norway, but refused to comment on whether he would have been willing to take part in such an attack himself. At that time, Hussain had been a leading activist and spokesperson for the Islamist group Profetens Ummah from the time of  its  first public appearance in mid-January 2012. The Norwegian group, which appears to be inspired by and to be in contact with well-known British Islamic Anjem Choudary, also included Arfan Bhatti, a former gang member turned extreme Islamist. In 2008, Bhatti was convicted for his part in the 2006 synagogue shooting, although he was acquitted of the terrorism charges he had also faced. While a January demonstration by the group gathered no more than roughly 35 people, it generated massive media attention, partly because of a video which was uploaded to the Internet in connection with the demonstration; a video which was largely seen as making threats against the Norwegian royal family and several leading politicians.

Just weeks before the anti-Semitic Facebook post attributed to Hussain, Profetens Ummah had arranged a demonstration outside the U.S. embassy in Oslo, ostensibly to protest the controversial YouTube-video Innocence of Muslims. Amongst the 150 people present were both Bhatti and Hussain. Bhatti has since been jailed in Pakistan.

Hussain had also been charged with hate speech against homosexuals based on a November 2012 Facebook post. Reacting to news reports on a violent attack against Amal Aden, a Somali-born Norwegian author and openly lesbian Muslim, the Facebook post said she should have rather been “stoned to death”. He was acquitted of those charges, leading to considerable debate in the Norwegian press.

Hussain was sentenced to 120 days in prison. Half of the sentence was suspended and the rest was deemed time served.