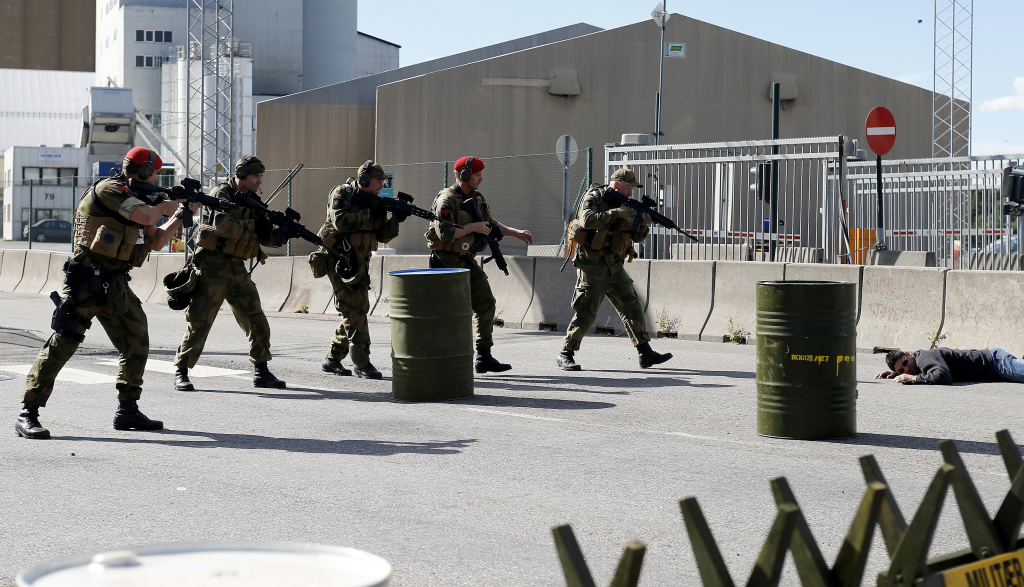 INQUIRY: Norway’s Police Security Service (PST) has started an inquiry after anti-Islamist social-media participants urged like-minded Norwegians to enter the Home Guard and fight against Muslims in Norway. Pictured is the Home Guard’s Derby rapid-reaction force on Sjursøya, an Oslo peninsula, during an exercise in the capital last year. The soldiers shown here have nothing to do with the matter under investigation. Photo: TORBJØRN KJOSVOLD/Norwegian Defense Media Centre

NORDIC EXTREMISM – PART 1: Military officials have alerted the Norwegian Police Security Service (PST) that extremists are urging Norwegians who hate radical Islam to join the Home Guard, a branch of the armed forces, in order to mount physical resistance against Muslims in the country.

The Norwegian daily Dagsavisen and Hate Speech International have also learned that the PST has begun making inquiries into the matter. It is not clear whether the security agency has opened a formal investigation or adopted a more preventive approach to handling the extremist clique in question.

Worries on the rise

“We cannot comment on individual cases,” PST spokesman Martin Bernsen said. “But in general I can say we have a growing concern about anti-Islamic circles in Norway.”

The PST has warned that a recent increase in the recruitment of young Muslims to fight in Syria’s civil war and join radical Islamist groups may further polarize opinion in Norway and prompt a backlash from right-wing extremists.

On 4 October a retired former secretary general of an international organization in Norway issued a crass challenge on his public Facebook page. It involved Norway’s Home Guard, whose regional units and task forces all focus on defending national territory and civilian institutions.

“The Home Guard could be the organization to join in order to do your part in fighting Islam in Norway,” the 68-year-old wrote on Facebook. “They (Muslims) don’t belong here, and should be helped to leave our country.”

On Monday the man vilified Mani Hussaini, the newly elected leader of the Labour Party’s youth wing and a Muslim refugee from Syria.

On both Twitter and Facebook the 68-year-old wrote: “Be sure to grab this Muslim-amoeba by the collar as often as you can!”

Amund Garfors, a former county-level head of the radical-right Democrats in Norway who is active in the Norwegian People’s Movement Against Immigration (FMI), contributes frequently to the 68-year-old’s Facebook threads and joined in denouncing Hussaini’s election.

For Garfors, the idea of deploying the Home Guard against a perceived Muslim invasion of Norway is nothing new. In October 2011, according to Aftenposten, Garfors said the Home Guard gear up to block such an invasion.

“So you would send in the Home Guard against Muslims?” the newspaper asked.

“Of course, if they start making trouble,” Garfors said.

The 68-year-old has had media attention before. The website Vepsen, or “The Wasp”, reported on his outcry over the choice of Shoaib Sultan, of the Green Party, to lead Oslo’s 2013 Constitution Day celebration committee.

“Too bad we have to take bats to the 17th of May parade this year,” the pensioner wrote in a Facebook discussion administered by people active in the anti-Muslim Norwegian Defence League. Another participant waved off the idea of wooden bats and said “take an AG-3” instead, referring to the Norwegian variant of a German combat rifle.

A comment by the 68-year-old on 22 January could be interpreted as suggesting he believes it may be necessary to do more than talk.

“Ethnic Norwegians will now defend themselves against the attacks by the Muslim brotherhood that wants to eradicate the Norwegian (brotherhood) and take over the country,” he wrote. “And (by) their Norwegian stooges who betray their people. As we did during World War II.”

The Norwegian resistance movement against Nazi occupiers in World War II assassinated a number of people thought to be dangerous traitors. A month after he first alluded to that period, the 68-year-old condemned members of Norway’s Liberal and Christian Democratic parties as “traitors” for supposedly facilitating a “Muslim invasion of Norway”.

Disavowal by the military

“The Home Guard deplores statements of that kind,” he wrote. “Our primary mission is to protect people and important social functions. We protect all people, regardless of ethnicity or religious belief.”

He acknowledged that top-ranking Home Guard officers were aware of the issue, which he said was the first of its kind to arise.

He said the military routinely checks the background of incoming soldiers to keep out those who are unfit to serve. “We have no specific examples of soldiers who have expressed a wish for the Home Guard to be used against specific ethnic groups,” he added.

In an interview with HSI and Dagsavisen, the 68-year-old himself denied calling for armed violence against Muslims.

“I have never encouraged or had the intention to encourage armed attacks on Muslims in Norway,” he said.

He also insisted that by “Home Guard” he did not mean the official Home Guard of the Norwegian Armed Forces. What he had in mind, he said, was more like the establishment of citizen vigilance groups.

“A better phrase is vigilantism, meaning that citizens, in the absence of adequate police, defend themselves against the violence that Islam perpetrates on Norwegian girls, women, men and children in Norway. Unarmed self-defence,” the 68-year-old told HSI and Dagsavisen.

Any military officials worried about his utterances, he said, are seeing “ghosts in broad daylight”.

He said his Facebook remark about carrying wooden bats to the Constitution Day parade was a joke. He also denied wanting to take the lives of those he calls traitors.

“No, no assassinations against anyone at all,” he said. “We are not at war. But you can’t exclude the possibility of a showdown in court against those who have been at the forefront of mass immigration.”

As for his exhortation to grab the Labour Party’s Mani Hussaini “by the collar”, the 68-year-old insisted that he simply meant the young man should be “followed closely politically”.

“I’m writing and expressing myself freely about what I see in the present and into the future. It is my democratic right,” he said. “There are certainly many who will try to stop independent pens like me. They will not succeed.”

Editorial partnership:  This part 1 of a series of articles is a joint project of the Norwegian daily newspaper Dagsavisen and Hate Speech International (HSI).

More than 30 youngsters from Raqqa have been killed in the battle for Kobani in the last four days, HSI...