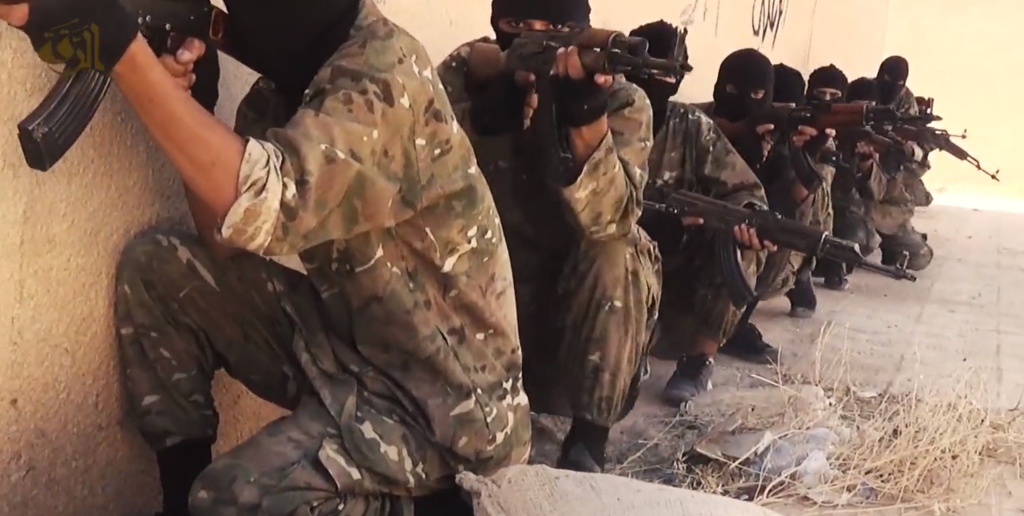 TRAINING: Jihadists and forced recruits, many as young as 16, are given one month of military training before they are sent off to the battleground. PHOTO: IS

More than 30 youngsters from Raqqa have been killed in the battle for Kobani in the last four days, HSI has learned from a variety of Syrian sources. The Islamic State (IS) is forcibly recruiting teenagers from Raqqa to perform armed jihad.

The militant organization IS has relied heavily on child warriors between 16 and 20 years of age as it fights the Kurdish Peshmerga for control of the Syrian city of Kobani at the Turkish border.

According to families and clerics interviewed in Raqqa, more than 30 Raqqa youth have been killed in the latest fighting around Kobani and at least one of them has committed suicide. The teenagers undergo intensive military training for one month, before they are sent off to the battleground.

HSI reporters obtained the information in interviews with a variety of sources inside Syria who spoke on condition of anonymity due to their fear of retribution from IS commanders.

IS (also known as ISIS or ISIL) wants to control Kobani in order to exercise strategic control of the border area. In recent days, however, Kurdish military forces have blunted IS’s advances, thanks in part to air support from the United States and allied countries.

To regain the initiative, IS is scouring the region for new soldiers to send to Kobani, a small Kurdish city also known as Ayn al-Arab in Arabic. Others joining the fight have been Kazakhstani fighters from the IS-affiliated Sabri Group. According to sources within IS, reinforcement by the Sabri Group was an important factor in the recent military advances by jihadist fighters.

According to the Syrian Observatory for Human Rights, IS units raised the black flag of their organization on the top of several buildings in the eastern part of Kobani on Monday. Live images documenting the claim have also been shown on several international news channels, including CNN.

But the Peshmerga have stated that they retain control and are pursuing a deliberate strategy.

Local Peshmerga commanders told the Syrian-Kurdish reporter Perwer Mohammed Ali that they killed 120 IS warriors in an ambush early on Tuesday morning, according to Norwegian daily Aftenposten.

In addition to air strikes performed by the US and allied air forces, the Kurdish defence forces in Syria have been assisted by three different factions of the Free Syrian Army, which is composed primarily of former Syrian officers and soldiers now opposed to President Bashar al-Assad.

Turkish President Recep Tayyip Erdogan said in a speech on Tuesday that air raids alone will be insufficient to keep Kobani from falling into the hands of IS. At the same time, the Turkish armed forces began adding to their troops and vehicles at the border, according to eyewitnesses who spoke to HSI reporters.

In the past couple of days, US-led air assaults have also struck an IS military base in Ain Issa, north of Raqqa. The base, formerly a military base for the Assad regime, was hit by 18 missiles on Tuesday, according to local sources.

The United States and its allies also carried out air attacks against an oil refinery controlled by IS in the village of Slouk, according to sources who witnessed the attacks.

The Islamic State has a reputation for recruiting children also younger than 16 years of age.

IS recently released a video of a child warrior allegedly named Abu Obida Alabsi (see video below). The video obviously has been produced for propaganda purposes, but provides important evidence of the war crimes committed by IS. Recruiting children to take part in military conflict, is in stark violation of the UN Convention on Children.

Jihadists from Belgium and the Netherlands appear to have held American journalist James Foley during a period of his captivity in...