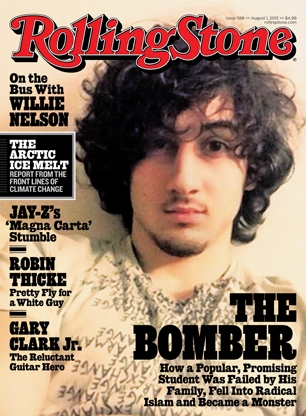 The fact that Rolling Stone Magazine chose to feature Dzhokhar Tsarnaev, one of the suspected perpetrators of the Boston terror bombing, on its cover has led to much criticism –  for instance, on the magazine’s own Facebook page. As USA Today reports, Boston Mayor Thomas Menino has joined the critics, stating that the magazine offers Tsarnaev “celebrity treatment” and calling the cover “ill-conceived, at best”.

For a Norwegian, the story has a familiar ring. When Anders Behring Breivik carried out his twin terrorist attacks in Oslo and at Utøya, murdering a total of 77 people, most of them youngsters active in the Labour Party’s AUF youth movement, the first pictures available of the terrorist were pictures he himself had made as a twisted kind of promotional material. On one of them he points a gun towards the camera. On another he wears a uniform full of self-made “decorations”. On a third, he wears Masonic regalia. Gradually, more pictures became available. They became front-page material. In the first weeks after the terror attacks, pictures of Breivik were shown on the front pages of leading Norwegian daily newspapers on an almost daily basis.

For a journalist, it is easy to understand why. The appetite for pictures of the terrorist was natural and logical as Norwegian and foreign media started digging into Breivik’s past. However, it is also easy to understand why family members of Breivik’s victims reacted negatively, stating that it was painful to have to see the face of the perpetrator every time they went to the local store. A paradox is also involved: Breivik craved attention. He even described his terrorism as part of a “marketing campaign” for his so-called manifesto, a 1,500-plus-page document filled with anti-Muslim paranoia, anti-establishment propaganda and encouraging words for potential followers. The massive media attention which the case naturally received gave Breivik the attention he sought, with his very own self-promotional pictures illustrating and framing the coverage.

While Norwegian media certainly could have – and in my opinion, should have – refrained from depicting Breivik on the front page as much as they did, the amount of coverage the tragedy and its perpetrator received was necessary. The perpetrator’s background is a crucial element of the story. How else to describe the radicalization process that led Breivik to believe in wild conspiracy theories concerning “Eurabia”, and his view of Labour Party members as traitors to be killed? Looking at his personal history and his mental state was part of trying to understand.

This brings me back to Rolling Stone Magazine and its cover story. Regrettably, the magazine’s decision to feature Tsarnaev on the front, using a picture with a sort of dreamy pop aesthetic, has diverted attention from the story itself. It’s a pity, since the interesting, in-depth article provides insight into the life of the young terrorist. Does it reveal much about his radicalization process? Perhaps not, although that process may have started with something as widespread as belief in conspiracy theories concerning the 9/11 attacks in 2001. One excerpt shows how difficult it may be to trace Tsarnaev’s radicalization at all:

“His brother must have brainwashed him,” says Sam. “It’s the only explanation.”

Someone mentions one of the surveillance videos of Jahar, which show him impassively watching as people begin to run in response to the blast. “I mean, that’s just the face I’d always see chilling, talking, smoking,” says Jackson. He wishes­ Jahar had looked panicked. “At least then I’d be able to say, ‘OK, something happened.’ But . . . nothing.”

This is one of the challenges of covering hatred. Sure, we do know something about the literature Tsarnaev read, including the glossy al-Qaeda magazine Inspire. We do know that he and his older brother were motivated by extremist Islamist ideology, and that they were seemingly radicalized – at least in large part – on the Internet. And yet, many questions remain unanswered.

Currently, I am reading the book They Would Never Hurt a Fly by Croat journalist Slavenka Drakulic, a book not about terrorism, but about war criminals in the former Yugoslavia. In one passage, she writes:

In 1993, I followed the trial of Borislav Herak, a Serb from Bosnia who was sentenced to death (later changed to life imprisonment) by a court in Sarajevo for sixteen rapes and the murder of thirty-two civilians (twelve of them raped women) and for his participation in the killing of some 220 Muslims. My biggest disappointment was finding that this was a man who looked like any other: a neighbour, a relative or even a friend. I looked almost desperately for a trace of madness in his eyes, for any evidence that he was different – in short, that he was a monster.

The cover picture of Dzhokhar Tsarnaev does create a similar feeling. The Boston Marathon bombing was an act of evil, killing three innocent people, injuring 264 others, maiming some of them for life. It would have been a relief to be able to spot the monster.

Later in her book, Drakulic notes that she has problems believing that the war criminals she writes about are monsters, which leads her to a question that should perhaps feature more prominently in media coverage of hatred and extremism: “What happens to make that ordinary man see an enemy in a colleague or a neighbour?”

Øyvind Strømmen is a Norwegian freelance journalist, author and managing editor of Hate Speech International. He has written extensively on the extreme right and other forms of extremism since 2007, and has published the Norwegian-language books Det mørke nettet (2011) and Den sorte tråden (2013), the first of which is also translated into Swedish, Finnish and French.
View all posts by Øyvind Strømmen →
News coverage
Breivik spawns racist vandals

We intend to post – from time to time – links to news coverage about the Hate Speech International reporting...