Two British men, apparently enamored of Norwegian terrorist Anders Behring Breivik, have admitted painting racist slogans on mosques. Before their arrest in January, an area of Torquay in Devon, England, was sealed off by armed police who feared they might be dealing with a terrorist cell. 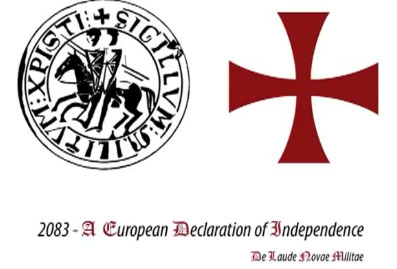 Screenshot from Breivik’s so-called manifesto, which was found on the laptop of one of the two young men charged under the British Terrorism Act.

In court last week the two young men, aged 18 and 20, pleaded guilty to conspiracy to cause criminal damage, as well as to sending articles containing threats intended to cause distress, reports the Western Morning News. The two men had painted racist slogans in red paint on Torquay’s Islamic Centre, including messages such as “Die Ragheads”, “Pakis go home” and “BNP for life – KT” – the latter a reference to the British National Party as well as to the supposed terrorist organization that the Norwegian mass murderer and terrorist Anders Behring Breivik claimed to belong to, which he called the Knights Templar. The men also sent threatening notes to mosques elsewhere in Britain, telling them: “Leave town or there will be hell to pay.”

On the laptop computer of one of the young men, investigators found an al-Qaeda training manual as well as Breivik’s so-called manifesto, “2083, a European Declaration of Independence”. While both are easily available on the Internet, possessing information likely to be useful to a terrorist is in itself an offence under the strict British Terrorism Act, a controversial point previously criticized by academics after a master student was detained for six days after having downloaded al-Qaeda-related material in connection with his research into terrorist tactics.

Judge Francis Gilbert released the men on bail at Exeter Crown Court, but warned them that they may face jail time when they return for sentencing next month. “These are serious offences for which they must expect immediate custody,”Gilbert said.

The pair drew inspiration from Breivik, and had performed an initiation ceremony during which they branded each other on the arm with a cross. However, Devon and Cornwall police Detective Inspector Costa Nassaris has underscored the importance of maintaining “perspective” and sought to reassure the community that there was “not an immediate risk of serious harm to the general public”. She noted that the two men referred to themselves as Knights Templar and demonstrated an extreme right-wing ideology with a particular hatred of Islam, but that they – in reality – were not part of a wider, more organized group.

Covering hatred
From rap to jihad

The fact that Rolling Stone Magazine chose to feature Dzhokhar Tsarnaev, one of the suspected perpetrators of the Boston terror...