What can the latest edition of the flashy IS magazine Dabiq teach us about their propaganda narratives? 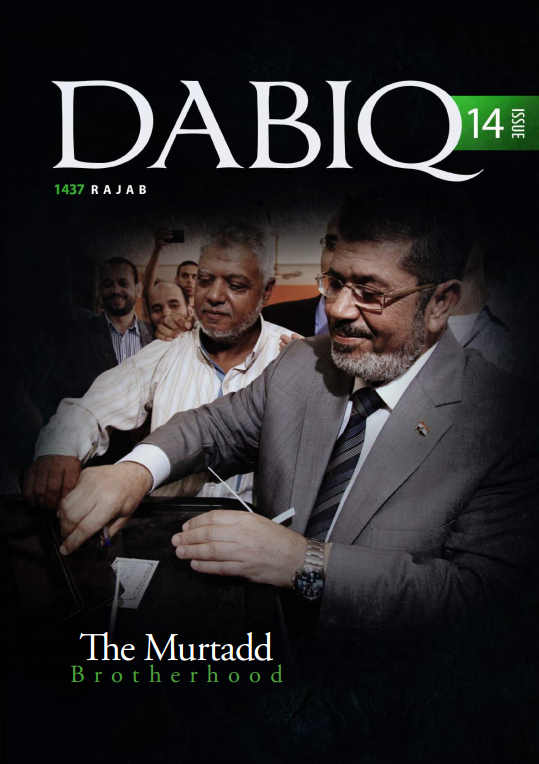 The self-declared Islamic State has been on the defensive for months. In Syria, pro-regime forces have recaptured Palmyra. In Iraq, IS has been pushed out of Ramadi, their long-lasting siege of Haditha has reportedly been broken and the net is tightening around Mosul, the largest IS-controlled city.

A media war is also raging. According to a recent report in the Israeli daily Ha’aretz, the group has been attempting to limit communication between Mosul residents and the outside world, confiscating TV receivers and scrambling radio signals.

DABIQ – THE ENGLISH-LANGUAGE ELECTRONIC MAGAZINE of the Islamic State has, however, been published less frequently than before. The first issue of the magazine was published in July 2014, when the Islamic State was near its’ military height, the second one came just 22 days later, and until late last year new issues were published rather regularly, with between 27 and 51 days between issues. After Dabiq #11 came out in August 2015, however, it took 101 days for #12 to come, and since then, there’s only been two further issues, Dabiq #14 having been released in mid-April.

As James Miller writes on RFE/RL’s “Under the black flag” blog, this could be a result of losses on the battlefield, making it “harder to spin the bad news”.

It should be noted, however, that Dabiq is only a small part of the IS media operations, which includes radio broadcasts, a massive amount of photographs produced on an provincial level, literature, socalled nasheeds (vocal chants) and various propaganda outlets in IS-held territories. This includes a weekly Arabic-language newsletter, al-Naba, and local media points used to spread the organization’s message both in print and digitally. The Islamic State and various regional media offices also continue to pump out propaganda videos.

Most of this material is in Arabic. Indeed, Dabiq is sometimes given more attention than it deserves within the wider framework of IS propaganda, simply because it is easily available over the Internet, published in English and also targeting a Western audience. However, Dabiq magazine does provide us with an insight into some of the propaganda methods used by the self-declared caliphate, and into the narratives it employs.

Charlie Winter of the Quilliam Foundation has pointed at six key narratives in IS propaganda: brutality, mercy, victimhood, war, belonging and utopianism.

THE BRUTALITY NARRATIVE is certainly important in IS propaganda. The organization does not attempt to hide or smooth over its’ brutality, instead revelling in it, documenting its own crimes in photographs and high-resolution videos. It has been locking people in a metal cage to drown them, it has thrown people of rooftops, it burned the Jordanian pilot Muath al-Kaseasbeh alive, it has locked people up in cars and buildings before blowing them up, et cetera. Shock effect videos from the self-declared state certainly aims to indimidate enemies, but they also seek to provoke international outrage, and to draw media attention.

Unsurprisingly, it is also found in the most recent edition of Dabiq. One example is found in the article “Kill the imams of kufr [i.e. disbelief] in the West”, an article which seeks to provide readers with religious justification for executing what the Islamic State deems to be apostates, calling for the murder of a number of Muslim scholars residing in the West, including Salafist preachers such as Bilal Philipps and Pierre Vogel. Amongst the illustrations in the article is a photography seemingly taken from an execution.

Other examples are found in “advertisements” for videos released by the Islamic State, found in the “Selected 10” sections of the magazine. The videos pointed to include – for instance – a video named “That they might stop”, in which three men are kneeling in front of an executioner, who proceeds to behead one of them using a knife.

As Winter writes, the notion of “mercy” is regularly featured in tanden with brutality in IS propaganda. He points to a video released six weeks before Abu Bakr al-Baghdadi – the IS leader – was declared caliph in June 2014, “Clanging of the swords IV”, noting that it “presented an orgy of violence that was carefully juxtaposted with scenes in which Sunni Muslims in Iraq’s Anbar Province are seen responding to the Islamic State’s istitaaba, its appeal for repentance”. In the most recent edition of Dabiq, mercy is mentioned in connection with the alleged apostasy of the “imams of kufr”, quoting their self-declared caliph’s declaration that “any of the apostates from the sahwat or otherwise who repent to Allah and surrender themselves to the Islamic State will be guaranteed amnesty”.

THE NARRATIVE OF VICTIMHOOD, as Winter writes, “a timeless theme in jihadist and Islamist propaganda”, built on “the perception of an alleged global war on Sunni Islam”. Like mercy, the victimhood narrative is closely intertwined with the brutality narrative. One example is the video in which Muath al-Kaseasbeh was burnt alive, where pictures of al-Kaseasbeh’s execution were juxtaposed with imagery from the aftermath of airstrikes. The video – titled “Healing the hearts of the believers” – thus seeks to portray the murder of al-Kaseasbeh as something of a cleansing, and sets the self-declared Islamic State itself into the role as the only ones standing up for Muslims against “the crusaders”.

A similar story is found in Dabiq #14s portrayal of the Brussels terror attacks. The very foreword of the magazine states that “Muslims in the lands of the Khilafah have watched their beloved brothers, sisters, and children being relentlessly bomber by crusader warplanes”, and says that “scenes of carnage, of blood and limbs scattered in the streets, have become commonplace for the believers”. The terror in Brussels is simply described as revenge for “grieving widows, distressed orphans, and solemn soldiers”.

Of course, the Islamic State’s idea of Islam being under siege goes further than just pointing at the West, and Western allies. Most importantly, the Islamic State is distinctly and extremely anti-Shiite, considering Shias to be non-Muslims, and branding them with the derogatory term rafidah. The cover story of Dabiq #13 was dedicated to an attack on Shia Muslims, and anti-Shiism is also mixed with anti-Jewish ideas, Shiism itself being described as “a plot by a Jew – Ibn Saba – following in the footsteps of his Jewish predecessor Paul, who had corrupted the pure religion of the Messiah”.

The Islamic State also attacks other groups, such as the Afghan Taliban for not being sufficiently anti-Shiite, describing this as a perversion.

IN FACT, the world-view of the self-declared state is brutally Manichean, dividing the world into two camps. Even other Islamist groups are placed into the opposing camp, including – of course – al Qaeda and the Syrian al-Qaeda affiliate Jabhat al-Nusra, which the Islamic State has been fighting with. The cover article of Dabiq #14 clearly underscores how the Islamic State also sees The Muslim Brotherhood as an enemy. The Brotherhood is described as no less than a “devastating cancer […] attempting to drown the entire Ummah in apostasy”. The Muslim Brotherhood is attacked for supporting democracy and human rights – both described as pagan religions.

“THE ISLAMIC STATE ‘WAR MACHINE'”, writes Winter, “is the fourth constituent part of its brand”. The organization often places a focus on its military gains and successful operations. In Dabiq #14 this is done through a long list of attakcs, including both military operations and outright terror attacks, such as the Brussels attacks and the murder of the Hindu priest Jogeshwar Roy in Bangladesh.

Such content can serve several purposes for the group, including raising morale amongst its fighters, but has also been used as part of information warfare, simply through spreading disinformation. Winter mentions how the group hav on several occassions intensively documented fighting on one front while imposing a media blackout on another, thus attempting to distort media and governmental understanding.

Spreading reports on the Islamic State’s alleged strenght and presence in different corners of the world also plays into yet another narrative, the utopian narrative of an Islamic caliphate.

THE NARRATIVE OF BELONGING is important for the Islamic State, which uses it to draw into new recruits. As Winter points out the publication of videos and photo reports depicting fighters relaxing and enjoying themselves, celebrating Islamic holidays, etc, the Islamic State propagandists underscore the idea of brotherhood in the caliphate. In short, the group promises friendship, security, a sense of belonging and even – as it did in one partly Swedish-language video, “En mujahids eid” – freedom.

Like the international focus mentioned above, this also feeds into the organization’s utopianism – the narrative Winter describes as “perhaps the broadest and most important narratives” exploited by the Islamic State.

Here, a few examples concerning Dabiq can serve to explain two separate parts of IS utopianism. The name of the magazine itself, Dabiq, is a reference to a Syrian town not far from the Turkish border, but also to Islamic eschatology: Dabiq is the supposed site of an epic and decisive battle which will take place near the end of times. In the understanding of the Islamic State, it is to be a battle between the Muslims – i.e. themselves – and crusader armies. Every issue of Dabiq includes a quote by Abu Musab al-Zarqawi, the infamous founder of their predecessor group: “The spark has been lit here in Iraq, and its heat will continue to intensify – by Allah’s permission – until it burns the crusader armies in Dabiq”.

IT’S AN APOCALYPTIC VISION, which could easily be seen as a contrast to another part of IS utopianism: state-building, built around the idea of a reestablished caliphate, and fed into with the videos and photo reports seldomly reported in global news media: proselyzitation campaigns, the already-mentioned celebrations, road-building, pictures from IS-held territories showing seemingly peaceful daily life. In some ways, however, it not a contrast, but rather a confirmation. Through declaring its’ caliphate, the Islamic State is trying to assert itself above other jihadist groups, finally building the society they all have been dreaming about, and at last waging a war that will “burn the crusader armies”.

In the most recent edition, the message is being hammered in, for instance through the use of quotes from a United Nations report discussing the “sophisticated, quasi-bureaucratic revenue generating system” of IS. One of videos advertised in the magazine, “Safety and security in the Islamic state”, is more direct. A video of 21 minutes, it combines showing IS forces carrying out a large number of executions with videos showing industry, agriculture, fishing, traffic and daily life.

It is a mix of brutality and utopianism, a mix the self-declared Islamic State has been able to build a larger story around, a story still able to bring recruits. In the end, however, it also reveals one of the weakness of this modern-day totalitarianism: if the self-declared caliphate is unable to hold unto the areas it has conquered, the caliphate will fall, the utopian dreams will shatter and all that remains is what gives it the most attention in international media today: murder.

Right-wing extremists around the world have well-functioning networks. Through these they spread information, music and propaganda. They cooperate and provide...