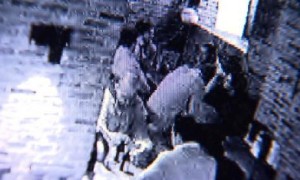 CCTV images from the arrest of the Dutch terror suspect at a pub in the town of Sint Niklaas.

A 23-year-old Dutchman was arrested in the Belgian town of Sint-Niklaas on Nov. 13 on suspicion of plotting terror attacks on Flemish state television and political targets.

The man, whose name was not reported, is suspected of planning terror attacks on Flemish state broadcaster VRT, as well as on undisclosed political institutions. He was arrested in a pub in Sint-Niklaas, where he had allegedly attempted to recruit others for a terror plot, reports the Belgian daily De Morgen. The Dutch broadcaster RTL released CCTV images showing the arrest and the suspect being taken away in handcuffs by plainclothes police.

The suspect is currently undergoing a psychiatric evaluation at a prison psychiatric ward in Bruges, with reports saying that “a mental problem plays a role”, without giving details. However, prosecutors say the threat of attack appears to have been “very concrete, serious and giving rise to concern”.

“Apparently, he was planning to announce his plans live at the VRT, if necessary by using violence. Afterwards, he would target political institutions”, Antoon Schotsaert, a spokesman for the prosecutor’s office in Dendermonde, Belgium told VRT’s English-language website Flanders News. Reports also said the man was suspected of plotting attacks against “certain people” on the Nov. 15 King’s Feast Day, a Belgian holiday in honour of the country’s royal family. That triggered news media speculation that Belgian royals could have been intended targets, although officials have not commented on the timing.

According to Flanders News, the Dutchman, who had been staying in Sint-Niklaas without being registered as a permanent resident, had written a 80-page manifesto, leading local news media to draw comparisons Anders Behring Breivik, the Norwegian right-wing extremist who wrote a more than 1,500-page manifesto prior to his July 2011 terror attacks that left 77 people dead in Oslo and on the island of Utøya. Some media even called the suspect “the Dutch Breivik”,  despite information about his political views remaining sketchy.

Flanders News said the suspect had called for the overthrow of the Belgian state, which he reportedly denounced as an American puppet regime, and for the creation an independent Flemish Republic. Such independence views are not uncommon is Flanders, the Dutch-speaking northern region of Belgium. The manifesto also reportedly made references to British author George Orwell’s book 1984, which coined the famous phrase “Big Brother is watching you”. Reports said the suspect is believed to have intended that phrase as a criticism of the American bugging scandal in Europe.

There was no immediate evidence that man was part of a network or had any collaborators, the reports said.