ANALYSIS: The far-left Turkish terrorist group DHKP/C has found some support in Europe, helping bolster its claim to be at the vanguard of anti-capitalist struggle. 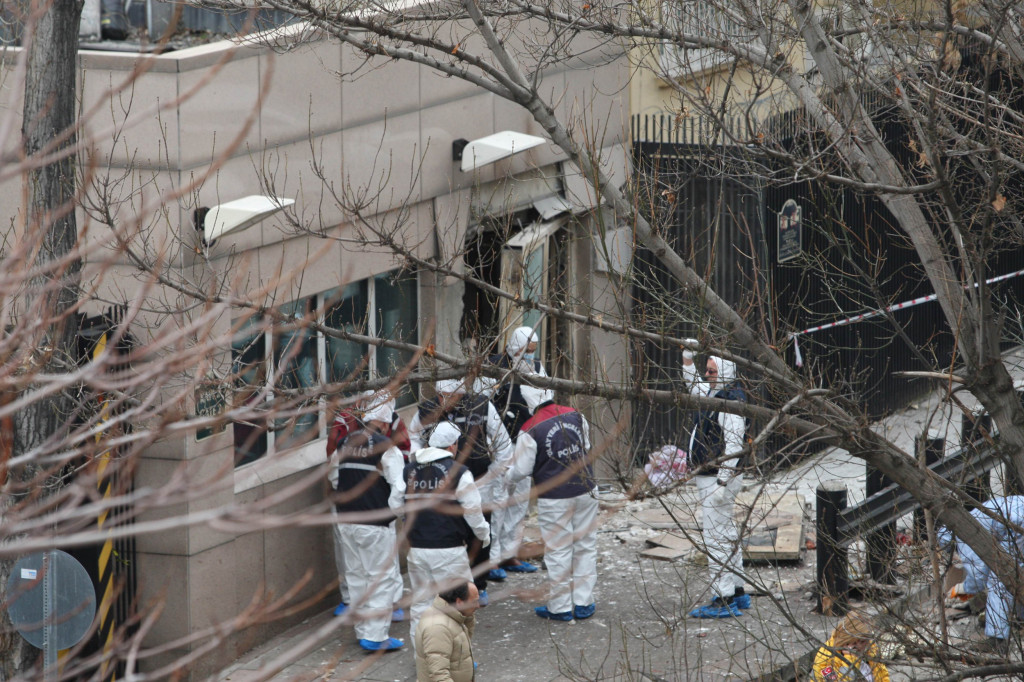 Police forensic experts work on February 1, 2013 at the site of a blast outside the US Embassy in Ankara. Two security guards were killed in the blast outside the US embassy, local television reported, amid speculation it was a suicide attack. The force of the explosion damaged nearby buildings in the Cankaya neighborhood where many other state institutions and embassies are also located. Photo: Copyrighted SCANPIX / AFP PHOTO / ADEM ALTAN

On 1 February 2013, at 1:15 p.m., Ecevit Şanlı detonated a six-kilogram load of TNT and a hand grenade at a side entrance to the United States embassy in Ankara. A Turkish security guard was killed and three others were wounded in the suicide attack.

As smoke rose to the sky and medics rushed to the scene, the world was once again reminded of the terrorist threat. While suicide bombs are often considered the hallmark of militant Islamist groups, the instigators of the Ankara bombing turned out to be Marxists. The extremist left-wing group Devrimci Halk Kurtuluş Partisi-Cephesi (DHKP/C, or Revolutionary People’s Liberation Party/Front, claimed responsibility the next day. It cited the war in Syria and Turkish support for the Syrian rebels as justification for sending Şanlı to the U.S. embassy.

In the mid-2000s, when I was a radical leftist activist, I met and spoke with DHKP/C members and supporters on several occasions. They were young, enthusiastic and quite serious about their political activities. Many belonged to the Alevi religious minority, a heterodox Shiite sect found predominantly in southern Turkey, along the border with Syria. They struck me as glowing with fervour – indeed, as fanatics. When they spoke, they would repeat phrases. They did not discuss issues so much as deliver speeches.

I never became well acquainted with the group, partly because its cadres struck me as so unfriendly and rigid. When on several occasions they insisted I join events to show support to their campaign against F-type high-security prisons in Turkey, I stayed away. For some time I kept in touch with other parts of the radical Turkish left. But even those who supported “armed struggle against the fascist Turkish state” confirmed my impression of the DHKP/C as particularly zealous and sectarian.

Like many European countries, Turkey was affected by the rise of the new left in the 1970s. The radical left there took a rapid turn towards militancy and armed struggle, spurred in part by a 1980 military coup, the third in the history of the Turkish republic. Clashes between leftist activists and members of the extremist nationalist Grey Wolves (Ülkücü Gençlik) and massacres allegedly carried out by Stay Behind groups fortified a belief on the far left that the state was essentially a fascist, anti-democratic force. According to Leninist doctrine, the only means to fight such a state was armed struggle.

Today, the main factions of the Turkish left have abandoned violence. In the early 2000s, the DHKP/C was considered the strongest and most potent of those that had not. The EU saw the group as a terrorist organization, and Turkish police clamped down on the DHKP/C in wide-ranging actions. After the death of its founding leader, Belgium-based Dursun Karatas, the group became dormant. By no means did it vanish, however, and the suicide attack in Ankara early last year could be seen as signalling a return of Turkey’s extreme left.

The attack also raises a further question: Should the DHKP/C be considered a threat at the European level?

According to the DHKP/C itself, the U.S. embassy bombing was a reaction to the U.S. position on Syria, where the group has a long-lasting relationship with President Bashar al-Assad’s Ba’ath Party. Speculation arose after the attack that the Syrian regime itself was involved. In an analysis written for the Turkish daily Hürriyet, terrorism expert Ali Nihat Özcan argued that “the historical background, sectarian character and ideological motivation of [the DHKP/C], point to a strong connection to Syrian Intelligence.”

The DHKP/C’s international network operates largely under the radar, and European media have shown little interest in the group even in the wake of the attack. It is quite clear, however, that there are links to Europe’s Marxist left. While the DHKP/C itself is a clandestine organization with secret cells, several legally operating groups in Europe are controlled by, were initiated by or at the very least have contacts with the DHKP/C. The activities of the party are often carried out through such groups, whose names are changed continually in part to avoid the attention of law enforcement agencies.

According to a leaked file from the American global intelligence company Stratfor, the DHKP/C operates at least in Germany, Belgium, the Netherlands and Austria. In its 2005 report, the German Federal Office for the Protection of the Constitution specifically mentioned two German groups with ties to the DHKP/C, including the Anatolian Federation (Anatolische Föderation), headquartered in Cologne. In 2009, the Stuttgart state court convicted three DHKP/C members on charges of membership in a foreign terror organization. At the time, both German and Turkish media wrote that the group probably has around 650 members and sympathizers in Germany.

The Turkish group has been working to gather international support through its campaign against F-type prisons. The International Symposium Against Isolation, arranged annually for several years and soon to be held in Amsterdam, is part of the anti-prison campaign and has drawn speakers from various European countries. It has also been visited by representatives of the Palestinian Marxist-Leninist group PFLP, which is considered a terrorist group by both the United States and the European Union. The 2009 symposium “Unity of the Peoples against Imperialist Aggression”, arranged by the Turkish People’s Front (Halk Cephesi), was similarly significant. Halk Cephesi has ties to the DHKP/C, and participants in the symposium included Hezbollah, the Bulgarian 23rd September Resistance Movement, the Honduran Popular Front of Resistance, the PFLP and the Belgian group CLEA (Comité liberté d’expression et d’association). CLEA was set up in response to a court case against Bahar Kimyongür, a Belgian citizen whom Turkey has repeatedly attempted to have extradited due to his links to DHKP/C. While CLEA refuses to “take a position regarding [the DHKP/C’s] actions in Turkey”, its members “denounce the use of anti-terror laws against this movement in Belgium”.

In Greece, too, the DHKP/C has had a presence. Some of its supporters there come from the Greek Maoist political party KKE-ML

This summary is far from complete, and it is safe to conclude that the DHKP/C has a rather wide support network in Europe. Two points are important in this regard, the first being that the group has connections to conferences where radical leftists meet and gain introduction to a range of Middle Eastern and other groups sympathetic to the use of violence as a political tool. The Turkish group’s presence could kindle hard-left radicalization in Europe. Attending such event is a simple matter. In my days as a radical leftist, a DHKP/C supporter invited me to one such international symposium the first time we met. It is conceivable that young leftists attending such events could be inspired to further radicalize and potentially even employ militancy.

The other point is still more important: Any interaction with DHKP/C by radical European leftists serves to fuel the Turkish group’s own struggle. International campaigns and conferences are not mounted for show alone – they also strengthen morale and bolster members’ sense of purpose. Groups such as the DHKP/C nurture a worldview in which their local conflict is linked to what they perceive as a wider confrontation against capitalism and imperialism. Shows of support, however minuscule, become an essential part of a narrative depicting the DHKP/C at the vanguard of international struggle.

It is particularly worrying that parts of the radical European left continue to lend legitimacy to the DHKP/C at a time when there is reason to believe it is being used as a proxy of the Syrian regime. We do not know how the Syrian conflict will unfold, but at some point the European states may be perceived as an enemy of the Syrian regime and its proxies.

The ability of the DHKP/C to find support abroad indicates that the EU’s designation of the group as a terrorist organization does not fully constrain its activities, even if some of its members are imprisoned and risk extradition to Turkey.

Hezbollah at a crossroads

3 Responses to Fuelling extremism on the left

IN DEPTH: "Is Germany's far-right NPD set to self-destruct?" asks a recent article by Germany’s international broadcaster Deutsche Welle. While...