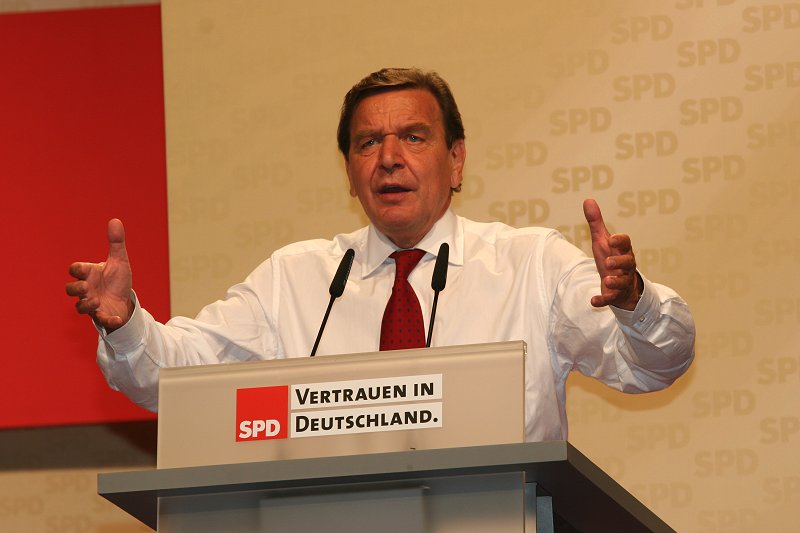 Gerhard Schröder at an election campaign event held by his political party, the centre-left SPD, in 2005. (Photo: Alexander Blum, released into the public domain).

The German terrorist trio known as the National Socialist Underground (NSU) may have plotted the assassination of Gerhard Schröder, then the German chancellor, in 2002.

As they sorted through computer files found in the burnt-out apartment of the three-member group in Zwickau, Germany, the police  discovered several manipulated images showing Schröder behind bars, with a Star of David badge on his chest. Below the image, the sentence “You’re the next” had been added in English. While Schröder in fact is not Jewish, the imagery is consistent with strongly anti-Semitic ideas found in German neo-Nazi circles, where political elites are often seen as part of a Jewish conspiracy.

The file containing the images was dated 2002, when Schröder was chancellor. As reported by Die Welt,  the images have been interpreted by officials as an indication that Schröder was on an NSU hit list. The NSU did not carry out any attempts on the chancellor’s life, however; and rather than targeting high-profile politicians, the group targeted immigrants in a killing spree that took nine lives between 2000 to 2006, and concluded in 2007 with the killing of a police officer.

The manipulated Schröder image was presented by the detective “Ellen H.” in Munich Court, where the last surviving member of the NSU core, Beate Zschäpe, is on trial, together with four alleged accomplices.

The Japanese anti-Korean group Zaitokukai was born on the Internet, and has taken to the streets with racist and violent...