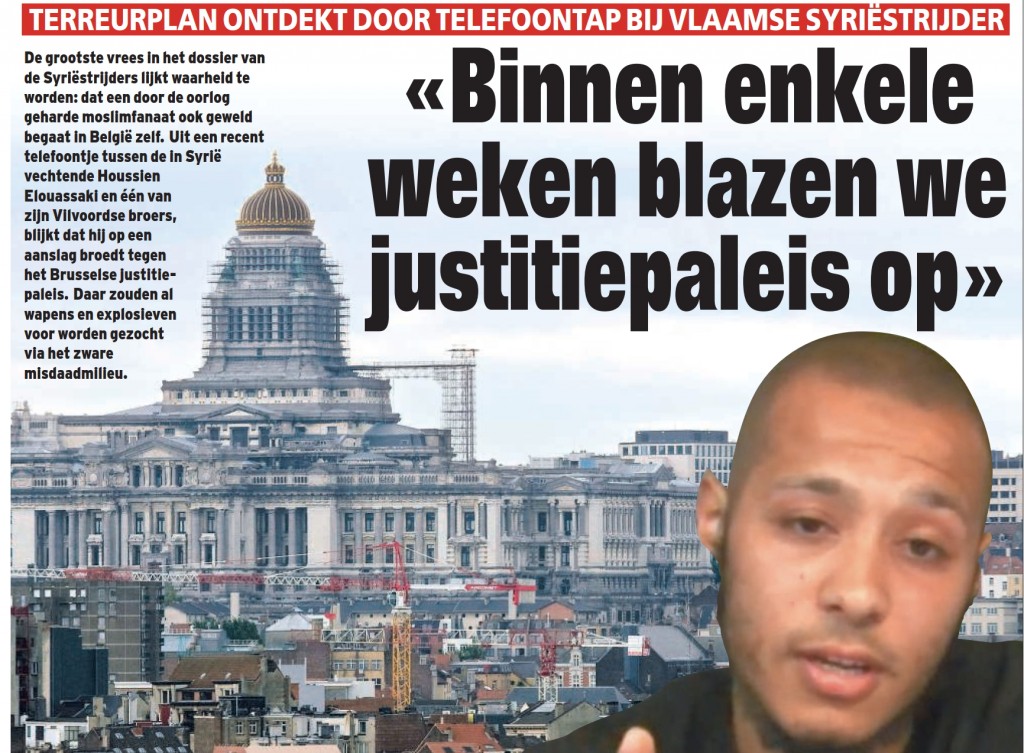 Headline from Het Laatste Nieuws, 18 May 2013: “Within a few weeks we will blow up the Law Courts of Brussels.”

A recent report by researchers Aaron Y. Zellin, Evan F. Kohlmann and Laith al-Khouri highlights the role of foreign fighters amongst the Syrian rebel forces. The researchers found that a large number of the foreign fighters come from three countries – Egypt, Libya and Tunisia – and suggests that the lion’s share of foreign fighters killed in Syria were fighting with the most hardline Islamist organization involved in the rebellion, the Al Qaeda-connected group Jabhat al-Nusra.

However, the authors also note that foreign fighters “comprise only a minority fraction” of the overall rebel force, and – importantly – that the Assad regime, too, has relied on outsiders, including members of the Hezbollah and the PFLP. “While the Assad regime has been quick to portray the entire corpus of Sunni foreign fighters as universally ‘Wahhabi terrorists and thugs’, the range of motivations pushing outsiders to join in the deadly fray ongoing in Syria is not entirely homogenous – and runs from Arab Spring-motivated pro-democratic revolutionary fervor to the most extreme sectarian and hardline Islamist viewpoints imaginable,” they write.

A number of Western intelligence agencies, including the Norwegian Police Security Services, have expressed concerns about residents of Western countries taking part in the civil war in Syria, fearing that people motivated by “extreme viewpoints” will return from Syria with war experience and a willingness to carry out domestic terror attacks motivated by extreme Islamist ideology. According to the anti-terror chief of the European Union, Gilles de Kerchove, between 500 and 700 people from various European Union countries have travelled to Syria to fight. “Not all of them are radical when they leave, but most likely many of them will be radicalized there, will be trained,” Mr de Kerchove told the BBC. “And as we’ve seen this might lead to a serious threat when they get back.”

In a study published in American Political Science Review earlier this year, the Norwegian researcher Thomas Hegghammer looked at the impact of foreign fighter returnees on domestic terrorist activity. His study is based on data concerning active jihadist fighters from North America, Australia and Western Europe between 1990 and 2010, and concludes:

Many assume that jihadists all want to attack the West, and that those who leave do so for training. I argue the opposite, namely, that most Western jihadists prefer foreign fighting, but a minority attacks at home after being radicalized, most often through foreign fighting or contact with a veteran. My tentative data indicate that militants usually do not leave intending to return for a domestic attack, but a small minority acquire that motivation along the way and become more effective operatives on their return. This has implications for counterterrorism, especially for the handling of foreign fighters.

A possible example is found in Belgium. In May, an alleged terror plot involving a foreign fighter from the Flemish town of Vilvoorde was described in the Flemish daily Het Laatste Nieuws. The story, however,  has not been corroborated by the Belgian Federal Prosecution Office. That office described the report as incorrect but refused to elaborate “in order to protect the investigation”. Another Flemish newspaper, De Morgen, has reported that Flemish foreign fighters have been involved in war crimes.

Such news reports have gained additional interest in Belgium due to connections to the former extreme Islamist group Sharia4Belgium, whose leader, Fouad Belkacem, was convicted in May 2012 to two years’ imprisonment for inciting hatred.

In the meantime, Syria is being used actively in propaganda from extremist Islamist groups. Pictures depicting the stark realities of war – often of children killed in alleged attacks by pro-Assad forces – are employed as a tool to further radicalization. Such propaganda is spread through social media such as Facebook and through commercial websites such as YouTube.

"Red terror struck again on Tuesday", the Hindustan Times reports, as suspected Maoists ambushed a police convoy in the eastern...