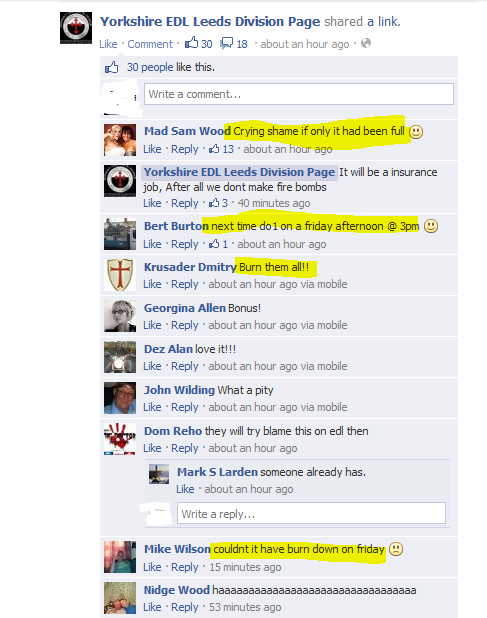 A suspected nail bombing of a mosque in the West Midlands on the first Friday of Ramadan is being treated by police as a terrorist attack, reports The Independent. According to the Birmingham Mail officers say that the bomb was designed to cause “serious harm”.

The bomb had been placed on an embankment near a disused railway line overlooking the mosque car park in Tipton. Normally the car park would have been filled with people at the time the bomb went off, but prayers had been switched from 1 p.m to 2 p.m because of the Muslim holy month of Ramadan, and no one was in the car park at the time of the explosion.

The bomb attack against the Midlands mosque took place on the same day as the private funeral ceremony for British Army soldier Lee Rigby. Rigby was attacked and murdered by two men on the afternoon of 22. May 2013, an attack motivated by extremist Islamist ideology which has been described as an act of terrorism. According to Faith Matters, an organization working against extremism, both physical and online attacks on British Muslims have risen in the wake of the murder. In their most recent issue, Searchlight Magazine, quotes a number of examples from the Facebook page of the English Defence League, including the following:

The attack against the Tipton mosque comes after two other mosque attacks in June. In one of the cases, another West Midlands mosque in Walsall was targeted in an attack with a home-made explosive device, which did not cause much damage or any injuries. A 75 year old pensioner was later arrested in connection with the Walsall explosion, but has since been released on bail. Scotland Yard’s counter-terrorism unit are also investigating a possible arson attack against a mosque in North London, where the letters ‘EDL’ had been sprayed in foot-high letters on the wall. The English Defence League denies any connection with any of the attacks, and claim to “oppose extremism of all kinds”. Simultaneously, however, the Daily Mail reports that EDL supporters “posted vile celebrations online, prompting fears of copycat attacks and increased racial tensions”.

Notably, pro-EDL bloggers have also speculated about whether the mosque attacks are “false flag” operations, intended to bring anti-Muslim groups such as the EDL into disrepute.