A new report from Hate Speech International examines the history and evolution of the media operations of Al-Shabab, key to a better understanding of the Somali jihadi-insurgent movement.

From the launch event at the Atlantic Council Africa Center, 10. November 2016

Since emerging in 2007 after the overthrow of the Islamic Courts Union (ICU) umbrella in the wake of the December 2006 Ethiopian invasion and occupation of parts of Somalia, al-Shabab has established itself as one of the relatively few jihadi organizations to succeed in the capture, control, and governance of territory for a significant period of time. When the self-declared Islamic State was masquerading as a «paper state» in 2008 and 2009, Al-Shabab’s leadership was busy constructing a bureaucracy of power, divided into regional and local nodes of authority, designed to implement and maintain insurgent rule over rapidly expanding territories. 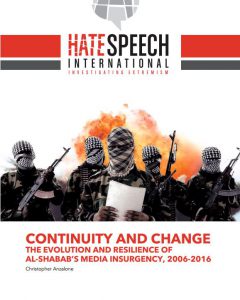 In establishing itself as a self-proclaimed and seemingly viable alternative governing authority, Al-Shabab continues to present a considerable challenge to the internationally recognized Somali Federal Government (SFG), the African Union and the international community. The Somali insurgents have also provided other Sunni jihadi groups with an example of how jihadi-insurgent governance can be enacted in practice.

As part of its broader governing and military strategy, Al-Shabab recognized the need for a capable media operations apparatus that would let it broadcast to and interact with multiple target audiences on a domestic, regional, and transnational/global scale.

Beginning in 2007 and 2008, the group slowly but steadily built up its media capabilities through the production of propaganda films, many of them aimed at recruiting new fighters and particularly foreign fighters from outside of Somalia. By 2009, the group had dramatically refined its media campaign and the quality of its audio-visual production, enabling its media apparatus to produce increasingly polished flms alongside written, audio/radio, and photographic releases. These releases were either directly produced by Al-Shabab’s offcial media branch, the Al-Kataib («Brigades») Media Foundation and «HSM Press» (with «HSM» standing for the group’s full name, Harakat Al-Shabab al-Mujahidin/«Movement of the Mujahidin-Youth») or by semi-offcial or affliated media collectives such as the terrestrial radio stations Radio al-Furqan and Radio al-Andalus and pro-insurgent Somali-language news web sites. The establishment and continuing evolution of its media operations capabilities has proven to be a valuable tool in the insurgent group’s overall strategy of territorial expansion and implementation of a form of rebel governance over areas of Somalia stretching south from the semi-autonomous region of Puntland. Al-Shabab’s media became an integral part of its insurgency.

A new report from Hate Speech International examines the history and evolution of al-Shabab’s media operations capabilities and narrative messaging. The report, written by Christopher Anzalone – a Research Fellow with the International Security Program at the Belfer Center for Science and International Affairs – gives particular attention to their strategic use and position within the insurgents’ broader strategy of territorial control, survival, and rule in light of shifts on the ground inside Somalia and, since 2012, increasingly in neighboring countries such as Kenya.

Also analyzed are the multiple target audiences of Al-Shabab’s multi-faceted media campaign; the importance of on-the-ground organizaiton and performance of political rituals and events as an integral part of insurgent propaganda; the growing battle between the group and Islamic State and its domestic and regional sympathizers in Somalia and East Africa; and the construction of specific media operations narratives designed to attract particular target audiences – domestic, regional and international.

Understanding the ways in which AlShabab’s sophisticated media campaign operates and identifying this multimedia output’s multiple intended audiences and its ability to advance insurgent inﬂuence and power projection are key to reaching a fuller comprehension of the successes and failures of one of the most successful insurgent movements of the 21st century.

The full report can be downloaded in PDF version here.

Watch the launch event, held at the Atlantic Council Africa Center on November 10, 2016:

Christopher Anzalone is a Research Fellow with the International Security Program at the Harvard Kennedy School’s Belfer Center for Science and International Affairs and a PhD candidate (ABD) in Islamic and Middle Eastern studies at McGill University.  He has published widely on Al-Shabab and other Islamist militant groups including Al-Qaeda and its regional affiliates, Tehrik-i Taliban Pakistan, Shi’ite militias in Syria and Iraq, and the Islamic Movement of Uzbekistan.  He has also consulted for the U.S., Canadian, and British governments and has been interviewed by news outlets including the BBC, The Telegraph, The Washington Times, the CBC, PBS, NPR, Al-Jazeera English, Reuters, and the Associated Press.
View all posts by Christopher Anzalone →

Divided We Stand, United We Fall

OP-ED: Trump finds supporters on the European populist right. by Péter Krekó “We Hungarians and Europeans have an interest in an...