Anti-Semitism is very much alive in France, as shown by a violent far-right protest that drew some Muslim support and by an insulting arm gesture whose popularity is spreading like wildfire. 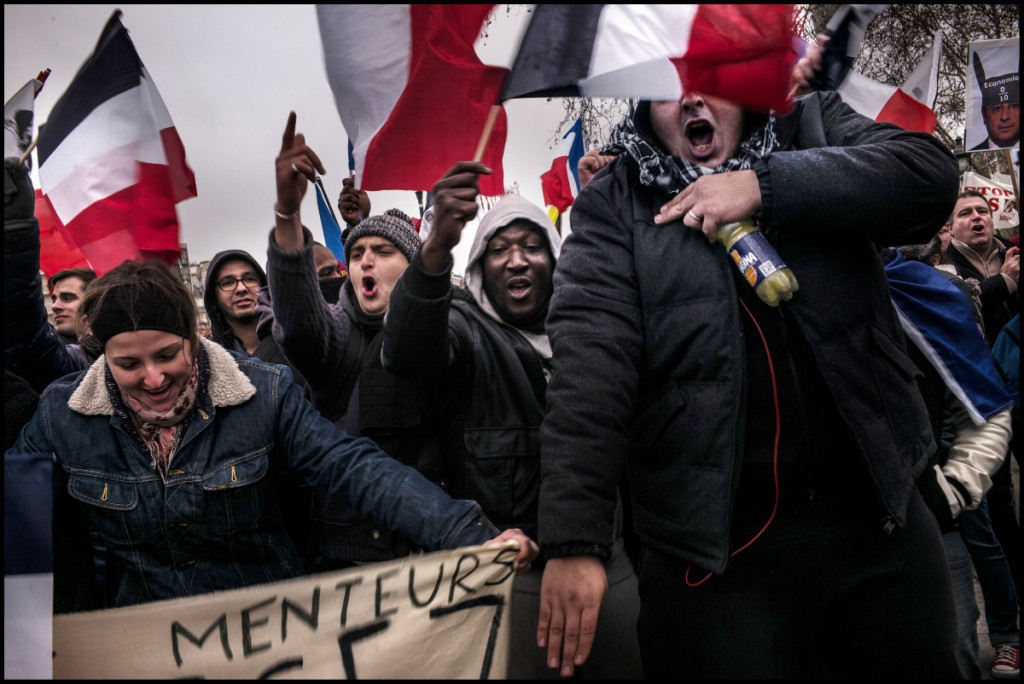 Protesters perform a “quenelle” during the Collective Day of Anger in Paris, France, on January 26, 2014. Photo: Renaud Khanh/ABACAPRESS.COM/SCANPIX

In late January, thousands of people marched in the streets of Paris in a so-called “Day of Anger” against Socialist President François Hollande. Many in the crowd shouted anti-Jewish epithets while others wholeheartedly embraced the “quenelle”, a gesture reminiscent of the Nazi salute that Hollande’s government has tried to suppress.

The demonstration was organized by a number of small organizations, mainly on the French far right. It turned violent, with security forces using tear gas to disperse several hundred youngsters who threw bottles, iron bars and fireworks at the police. Some 150 people were arrested, and 19 police officers suffered injuries in the confrontation.

“Jew, out of France”
Participants chanted slogans such as “Jew, p*ss off, France is not for you” and “Jew, out of France.” In a video from the march that was posted on YouTube, a man can be heard yelling “Faurisson is correct. The gas chambers are bogus” – a reference to the notorious Holocaust denier Robert Faurisson.

The demonstration drew support from well beyond the traditional far right, as the French political analyst Jean-Yves Camus noted with alarm in an interview with HSI.

“This was the first time in recent French history when Muslim youth and neo-fascists marched side by side,” Camus told HSI. “They were using the quenelle as a rallying gesture and chanting anti-Jewish slogans.”

Anti-Semitism repackaged
The quenelle has received considerable international attention in recent weeks. In December the French footballer Nicholas Anelka made the gesture, which resembles an inverted Nazi salute, in celebration of a goal, and has since faced accusations of anti-Semitism. In January, shows by Dieudonné M’bala M’bala – the controversial comedian who invented the gesture and used it while campaigning in the 2009 European elections – were banned outright.

Meanwhile, the quenelle has become something of a social media fad, with people spreading pictures of themselves doing the gesture. Disturbingly, such images taken at the gates of Auschwitz, in front of Anne Frank’s house in Amsterdam and next to Israeli soldiers have been widely distributed. The French movie maker Alain Soral performed the gesture at the Holocaust memorial in Berlin. All of this has led author Diana Blatter to describe the phenomenon as “repackaged anti-Semitism branding itself as hip, anti-authoritarian and playful”.

Family issues
A picture has also surfaced showing the former leader of the French radical right-wing National Front party, Jean Marie Le Pen, making the gesture. While the current party leader, his daughter Marine Le Pen, has distanced herself from Soral, her father has stated that he does not regret making the gesture. In the past, the older Le Pen has been convicted of “contesting crimes against humanity”.

“Intrinsically anti-Semitic”
“This is an intrinsically anti-Semitic gesture,” Camus told HSI. “It has nothing to do with being ‘anti-system’, and in any case Dieudonné says that the so-called system is in the hands of the ‘Zionists’. He is very much a propagandist of the old conspiracy theories which are common belief amongst both extreme right-wingers, amongst Islamic fundamentalists and within parts of the extreme left.”

Camus added that the phenomenon has a new dimension: “The quenelle is popular amongst a very wide social spectrum of young, mostly male, people – from youth with an immigrant background to far-right activists.”

In Camus’s opinion, Dieudonné uses code words, and thus is able to spread anti-Semitism within the limits of French legislation.

“The quenelle can not be outlawed. Per se, it has no other meaning than a ‘F*ck you’ to the system. Anti-Zionism is legal, and criticism of Zionist ideology can even be legitimate. In this case, however, it is clear what Dieudonné means by ‘anti-Zionist’.”

Camus points to conspiracy theories flourishing within the French Muslim diaspora: “There are people who really believe that France is under Jewish rule. They feel that France has apologized for its active role in the genocide of the Jews, but that it has not acted in the same way on such issues as slavery and colonial wars. While they have a point, the problem is that they switch from what can be seen as legitimate resentment to a conspiracy theory very similar to the ideas of a Zionist Occupational Government found on the extreme right in the United States.”

National Front set to win big
The National Front (known as FN in France) is best known for its staunchly nativist politics, often focusing on Islam as a threat. The party is likely to see increased support in the upcoming European elections. In some polls, as many as a quarter of the French have said they will vote for the party.

“Marine Le Pen is now trying to have the FN accepted as a mainstream political party,” Camus said. “Although she very much plays the anti-system card, she is cautious about avoiding proximity with those who use anti-Semitism as a political card.”

“The impact of Abu Musab al-Zarqawi is stronger than that of Osama bin Laden,” says the Jordanian researcher Hassan Abu...