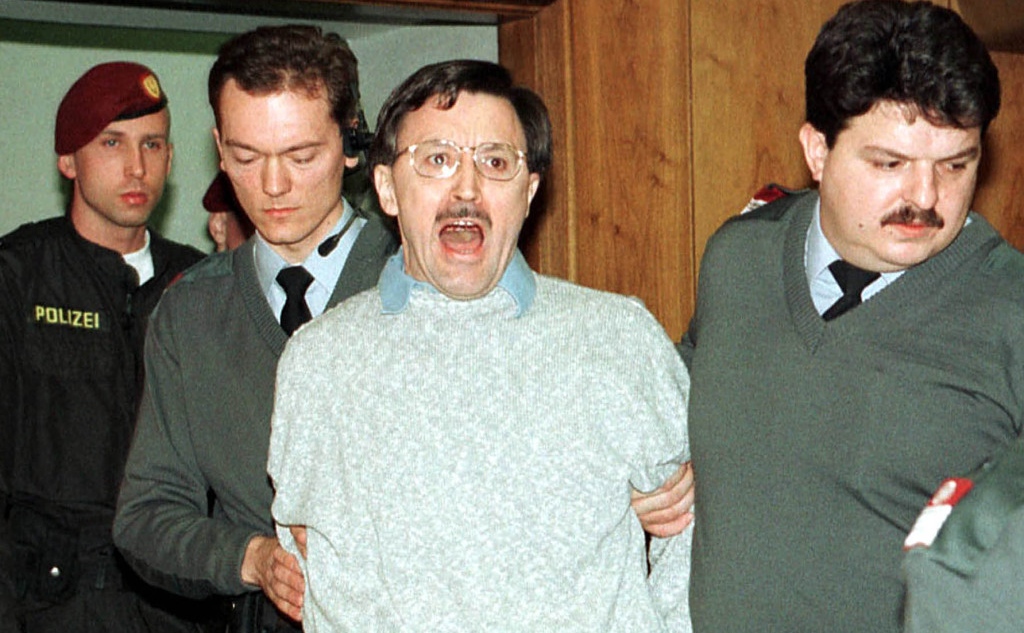 LETTER BOMBS: Former engineer Franz Fuchs was charged with letter bomb attacks likened to those of the U.S. Unabomber. Here shouting while two officers escort him in the court room in Graz, Austria on Tuesday February 2, 1999. PHOTO: Helge O. Sommer/AP

IN DEPTH: What does the story of Franz Fuchs tell us about lone-wolf terrorism?

“My first thought was that it had been an execution,” Stefan Horvath later said, recalling the moment he discovered the bodies of his son and three other men outside a Roma settlement in the Austrian town of Oberwarf.

It was early Februar 1995. The four men had been killed after trying to remove a placard reading “Zigeuner zurück nach Indien”: “Gypsies back to India”. When they touched the placard, a pipe bomb went off.

The bombing was the worst example of racial terrorism in Austria in 50 years. The next day, another bomb went off, this time in the nearby town Stinatz, wounding a garage worker. Stinatz – which is also known by its Croat name, Stinjaki – is home to many Burgerland Croats, a Croat-speaking minority in Austria, descendants of Croatian refugees arriving in the area hundreds of years ago. The two bombings were the culmination of a series of terror attacks in Austria: In December 1993, several mail bombs had been sent, one of them to the Social Democrat mayor of Vienna, Helmut Zilk, who lost two fingers in the explosion. In August 1994, a pipe bomb went off near a bilingual German-Slovenian school in Klagenfurt, injuring three police officers. In October that year, a new series of mail bombs were sent.

The backdrop
This all took place in an Austria where immigration was high on the political agenda. The Freedom Party of Austria – FPÖ – had turned towards hardline right-wing populism since electing a new leader, Jörg Haider, in 1986. The formerly liberal party now campaigned on an anti-immigrant platform. In early 1993, the party launched its Österreich zuerst (Austria First) initiative, calling for an immigration stop and other more or less draconian measures, and gathering signatures to bring the proposals to the Austrian parliament. The controversial campaign was supported by over 400,000 people, yet led to a split inside the FPÖ. Five MPs in the party’s liberal wing left the party, and the FPÖ left the Liberal International, which was already preparing to expel it.

The initiative was also met by a massive demonstration against intolerance and racism in Vienna, where an estimated 300,000 people lit candles in a protest against racism, intolerance and the FPÖ.

While right-wing populism was on the rise, the extreme right was under pressure. In 1992, Austria adapted its anti-Nazi legislation, banning Holocaust denial. Several prominent neo-Nazis were arrested and convicted to prison terms. Others were forced to bring their activities underground. Unsurprisingly, the police suspected that the letter bombs sent in December 1993 originated in the extreme right. A number of raids were carried out against known neo-Nazis. Two suspects – Peter Binder und Franz Radl – were eventually arrested, and there were indications that the perpetrators had been found. However, the cases against them soon collapsed. Binder and Radl may not have been angels, but they were not behind the terror campaign. And while the police investigated neo-Nazis, a letter was sent to the Austrian Federal Ministry of the Interior, claiming responsibility. It was kept a secret until February 1995, to “avoid public worry”.

The Slavic Dictatorship
After the second series of letter bombs a new clue emerged, in October 1994. Further letters claiming responsibility were sent, one of them to Slovenian Foreign Minister Lolze Peterle, two to the Austrian weekly Profil, another two to two different lawyers and one to the FPÖ politician Hans Jörg Schimanek. The letters came from a group calling itself the Bajuwar Liberation Army, or Bajuwarische Befreiungsarmee. It was a group no one had ever heard off.

The language of the letters were not typical of the neo-Nazi scene. Anti-Semitism was not prominent. Hitler was only mentioned once in a total of 72 pages, and not in an altogether positive light. Jörg Haider was derided for his alleged belief that it was possible to bring down the “Tschusch” dictatorship through democratic means (Tschusch being an Austrian-German derogatory term used primarly for South-East Europeans). “They are all clueless,” one of the letters read, “and believe that we will accept stray Mediterraneans, Asians, Africans and Heathens, as well as our ruling caste, the Tschuschen.” The letters baffled the investigators, however. They contained detailed historical references, often to early medieval times. They also contained technical descriptions of bomb production. In one of them, the American National Security Agency (NSA) was mentioned. While none of this may seem particularly striking today – in the age of Google, Wikipedia and Edward Snowden – it was puzzling at the time. The NSA was little known in Europe. The historical references were obscure. The texts on bomb-making revealed a certain level of insight into chemistry. It isn’t surprising that many believed that the Bajuwar Liberation Army was an actual group.

The lone wolf
The young psychiatrist Thomas Müller, who had just finished training as a profiler with the FBI, had another theory. He thought that the perpetrator was a man living on his own, possibly a retiree, past 50 and with grown children. He also developed a strategy to stress the bomb maker, through clever use of the media. While important parts of Müller’s profile was wrong – the perpetrator was in his 40s, had no children and lived with his parents – the strategy was successful. It made the bomb maker increasingly paranoid.

In 1996, he carried out his last attack, another letter bombing. In 1997 he was exposed, by chance, as he was following two women he believed to be undercover police agents. They were not agents, but they noticed the white van tailing them and called the police. When he was stopped and asked to produce his ID, he set off a bomb, attempting to kill himself. He lost both his hands, and injured a police officer. It was the end of the Bajuwar Liberation Army. The Army was soon to be known as a one-man project, the idea of a lone-wolf terrorist, Franz Fuchs.

Fuchs was arrested without further resistance, and was sentenced to life in prison on 10 March 10 1999. On 26 February the following year, he was found hanged with the cable of his electric razor in his prison cell in Graz. The prison physician concluded that it was a suicide. While some have asked questions about how a man with no hands managed to hang himself, psychiatrists were not surprised. “It was only a matter of time,” court psychiatrist Reinhard Haller stated.

Of course, there are still those who believe that Fuchs was not alone. While the evidence against Fuchs were clear, it is interesting to note what the police did not find in his residence. There were several bombs, but no traces of a chemical lab were they could have been made. The inkjet printer used to print the letters was nowhere to be found, and the typewriter that had been used to address envelops wasn’t there. Nor were there any historical reference works. His defence lawyer, Gerald Ruhri, warned in court against “the illusion that this is a solved case”. Even Michael Sika, who was then the director of the Austrian Directorate General for Public Security, said he could not rule out that others were at least partially involved with the terror campaign. Still, he underscored his belief that the Bajuwar Liberation Army existed only in Fuchs’ mind.

Fuchs and Breivik
After the terror attacks in Norway on 22 July 2011, in which 77 people were killed, Austrian media were quick to draw parallels between Fuchs and the Norwegian perpetrator, Andreas Behring Breivik. There are important differences between the two. Breivik, for example, is a rather clear-cut example of someone radicalized on the Internet, while Fuchs carried out his attacks when the web was still very new. They also drew inspiration from different sources. But there is good reason to look carefully at their similarities. Indeed, the Fuchs case can tell us something important about a kind of terrorist that has received increased attention in the last few years: the lone wolf.

While terrorists involved in groups are usually connected to a recognizable and easily identifiable ideology, lone wolves often construct their own. They are energized by ideas that exist in a wider culture or at least in a subculture. Breivik drew extensively on the anti-Muslim ideas of the “counterjihadist” blogosphere, while the Fuchs enigma is decidedly easier to comprehend within the context of growing Austrian nativism in the 1990s. Yet both ideologies were of the syncretist cut-and-paste variety, drawn from many sources, in parts outright odd or seemingly delusional. Media coverage and court procedures in such cases are often dominated by a focus on the “mentally ill loner”, rather than on the political dimension of the attacks. As the Norwegian author Audhild Skoglund states in her book Sinte hvite menn (Angry white men), this approach is a mistake, based on a tendency to see people as either mentally stable, and thus able of having an ideology, or as mentally unstable, and thus incapable of the same.

A striking parallel between Fuchs and Breivik is that both claimed to belong to what in all likelihood are completely fictitious armies – the supposed Bajuwar Liberation Army for Fuchs, and modern-day version of the Knights Templar for Breivik. However, as court psychiatrist Reinhard Haller (mentioned above) points out, such a fabrication has a function. It is meant to signify that “an entire movement and a dangerous fight squad” stands behind the defendant’s ideas.

While mental illness is indeed somewhat more common amongst lone-wolf terrorists than amongst other terrorists, the creation of fictitious groups may be symptomatic of another trait that is even more common in lone wolves . They are often social outcasts. Fuchs lived his life in seclusion. Breivik withdrew to his computer, reading and playing computer games, and having only very limited social interaction outside the online world.

Quite a few lone-wolf terrorists have tried to join groups with views similar to their own. When unsuccessful, often due to social awkwardness, they end up seeing the groups as failures, and themselves as the true believers who take their beliefs seriously and are willing to take action. A fictitious army serves an additional purpose: it appears to elevate the lone wolf to the important role in history he has long imagined. It provides, as Fuchs himself put it, “a certain mythos”.

IN DEPTH: Anti-government rage is primarily an American phenomenon, but a number of ideas and tropes from the US anti-government...