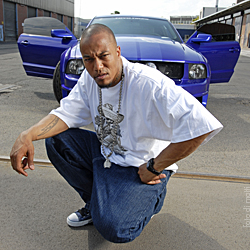 He used to be Deso Dogg, a somewhat successful rapper. Today, he is called Abu Maleeq, and he is being featured in Islamist propaganda material from Syria.

Denis Cuspert grew up in Germany, the child of a German mother and a Ghanaian father who abandoned the family when Denis was only a baby. His stepfather was a former American Army soldier, and a believer in strict discipline, a cause for much conflict between them. According to an article in The New York Times, the 2003 invasion of Iraq became a new source of conflict. Denis joined a youth gang, was involved in petty crime, and was eventually sent to a special farm in Namibia that sought to rehabilitate juvenile delinquents.

Then, in 2002, he started a career as a rapper, using the artist name Deso Dogg. His lyrics covered topics such as his time in prison, racism and war. In 2005 he was invited along on tour by the American-German rapper DMX, but was replaced after having had a mental breakdown. In 2006, he got a new chance, and the following year he announced that he would release a double album, “Alle Augen Auf Mich an” (All eyes on me). It was released in 2009. He was successful enough to have his music included in the movie Zivilcourage, a TV movie made by the Israeli director Dror Zahavi for the German television channel ARD.

Then his life took a new turn. Cuspert converted to Islam, gave up his rapping career and started doing nasheeds – Islamic devotional music. He joined the German Salafist scene, and became a supporter of terrorism and a noted propagandist. In a recording from June 2011 he praised Osama bin Laden. “Deso Dogg is important. He can really captivate you. These hymns can support a radicalization process,” said Guido Steinberg, an Islamic studies expert at the German Institute for International and Security Affairs in an interview with Reuters later that same year.

German authorities were worried. Security officials who spoke with The New York Times in August 2011, told them that he could be viewed as a security risk and stated that he was “an influential figure” in the growing radical Islamist scene, someone who “incite[d] violence and unrest through inflammatory videos and fiery speeches that praise terrorists and attack the West”. He was said to have inspired Arid Uka, the young Kosovar who – without belonging to a terrorist group – took it upon himself to open fire on a bus of American airmen at the Frankfurt airport in early March 2011, killing two and seriously wounding two others.

Eventually, Cuspert fled Germany to avoid arrest. He went to Egypt, and was soon rumored to have made several attempts to enter Syria. One rumor even had it that he was killed during a firefight in Aleppo. He was not. Recently, videos have surfaced on the Internet, purportedly showing Cuspert – now known under the name Abu Talha al-Almani – in Syria, fighting as part of a group called Junud al-Sham.

An unlikely story?
It may seem an unlikely story. It really isn’t. While al-Almani (the name means “the German” in Arabic) stands out because he was once a semi-successful rapper, his background is not all that unusual. Syria has become a major battleground for young radical Islamists recruited in Europe, many of them have similar backgrounds. A troubled family life is not unusual and a past in petty crime and as a gang member is fairly common. Some are converts to Islam; others were born into Muslim families, but had hardly practiced the religion before they found their way into extreme Islamism.

The story can be contrasted with the one about Ahmed, a young Norwegian of Algerian background, a story told in Lars Akerhaug’s recent book Norsk Jihad (Norwegian Jihad). While al-Almani was born in 1975, Ahmed was born in 1985. In 2005 he was arrested and charged with a serious drug crime and with possessing an illegal firearm. He was sentenced to five years prison in a lower court, but was later acquitted of some of the charges and released. In the meantime, he had become a Muslim, and a radical Islamist. Akerhaug writes:

He talks about how he discovered the world’s inequality, the differences between the rich and the poor, and that “evil really exists”. It sounds like a mixture of a religious conversion and a socialist world view. I try objecting that one could be opposed to social inequality between rich and poor countries without becoming an Islamist.

“Yes, but Islam gave me guidelines to how things should be. Islam does not accept injustice. For example, a Jew has just the same right to bring an issue before a sharia court as an Islamic emir. There is perfect equality in sharia, regardless of your faith or gender. If you are right, God is on your side. That’s our ideology. […] Many of my friends, those who know me from before, are surprised that I have become what I am today. But when they take a bit of time and talk to me, they notice that not that much have changed. I have chosen sides. It’s about choosing sides.”

In his interview with The New York Times, al-Almani points to some of the same personal development issues. He used to be a “real bad boy”, but has finally found the “right way”, he believes.

Videos from Syria
In August two videos emerged on Twitter, purportedly showing al-Almani in Syria, both also being promoted as “trailers” with a promise of full-version “documentaries” to come. The first was released by the so-called ShamCenter on YouTube, and within two weeks achieved 190,000 views. It has also been released in a Turkish-language version, which at the time of writing has an even higher number of views. The second video, a preview of a sermon held for fellow members of the Jund al-Sham, has not received as much attention. As a summary on jihadica.com shows, there are a number of other videos available too, providing “[an] interesting insight into the progress of Cuspert’s reversion to Islam and his embrace of radicalism”. As jihadica.com also points out, the jihadist music videos are sometimes enriched by pop-cultural aspects, including the latest main theme song from the computer game Call of Duty.

Thus, the German rapper turned jihadist serves as an interesting example for several phenomena. While he has been described as “the first Jihad-Pop Star of Germany”, his personal story contains elements of a story one often encounters. The rather professionally made videos featuring him are not only easily available through mainstream social media, but they are also filled with pop references. It remains to be seen whether the former Deso Dogg has or will actually take part in fighting in Syria, but his role as a media mujahid should not be underrated. There is a strong risk he will contribute to other young German Muslims leaving the country to fight in the Syrian civil war, and there is a risk that he might inspire future Arid Ukas.