Chaos reigns on the Australian far right, where anti-Muslim ideas are mixed with anti-Semitism and old-school radical nationalism. 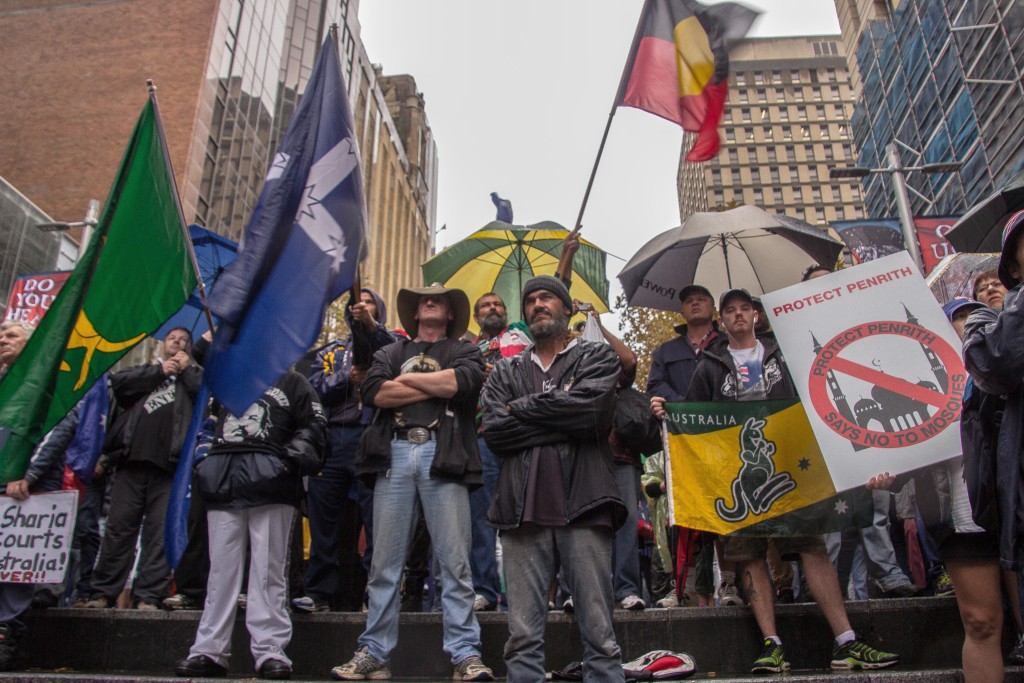 BENDIGO is the name of a town in inland Victoria, Australia. Originally, it was a gold rush boomtown, and even today the gold rush is an important part of Bendigo’s economy. It is a popular place for heritage-focused tourists.

Lately, however, Bendigo has become the focal point for Australian anti-Muslim protesters, and for their opponents. Earlier in October, the United Patriots Front arranged a rally in Bendigo, protesting plans to build a mosque in the town. The rally drew hundreds of people to the town, including a counterdemonstration. More than 420 police, including mounted police, uniformed officers and riot squads, succeeded in keeping the peace, although four arrests were made:  Two for carrying knives, one with a flare and one for minor assault. Thus, police succeeded in avoiding the ugly scenes that have marred other anti-Islam rallies and counterdemonstrations in Australia recently, including violent clashes in Melbourne’s Spring Street in July.

THE AUSTRALIAN FAR RIGHT IS CONFUSING, to say the very least. One of the older groups is the Australia First Party, founded by the former Labor Party politician Graeme Campbell in 1995, but now led by Jim Saleam, a man who started his political career in the short-lived National Socialist Party of Australia and later cofounded National Action, a “National Bolshevik” group. Saleam  was convicted of organising a 1989 shotgun attack on the African National Congress representative Eddie Funde, providing two fellow-believers with the weapon. In 1991 he was sentenced jail time for his role in the attack. To this day, however, he claims that he was the victim of a “political police conspiracy”. Saleam has also written a book – Pardon Me: The Anatomy of An Australian Political Trial – about the case.

The Australia First Party, headquartered in the Sydney suburb of Tempe has a long history, but little to show for it. In recent years, it launched a youth wing – the Eureka Youth League and aligned itself with the Greek neo-fascist party Golden Dawn.  This June, the Australia First Party came out in support of the United Patriots Front (UPF)  in a video posted on the UPF Facebook group, although the video largely focused on the endeavours of the left-wing Anti-Fascist Action. “Excellent video”, one supporter wrote, “with the godfather of Australian nationalism and the new guard”.

One logo used by the United Patriots Front, featuring a boxing kangaroo.

THE UPF was founded as a result of internal turmoil in the loosely structured movement Reclaim Australia. It claims to oppose “the spread of left wing treason and spread of Islamism”. Until recently, it was led by Shermon Burgess, a former activist in Reclaim Australian and in the Australian Defence League – one of many rather unsuccessful attempts at copying the English Defence League. Since it was established in mid-2015, the group has arranged several rallies. It has also drawn attention by conducting a mock beheading of a dummy outside the Bendigo City Council chambers.

JUST LAST WEEK, however, Burgess – who has been calling himself  “the Great Aussie Patriot” – stepped down from his leadership role, citing his disappointment with a video posted on Facebook by someone calling himself “the Great Aussie Potato”, a video clearly poking fun at Burgess. According to Burgess, the amateur comedian was a member of the movement. “He made a video mocking myself and another patriot who have actually done things for the movement”, Burgess said in a video announcing his withdrawal, “Yet here are supposed patriots sharing this video and laughing about it”.

Burgess handed over leadership to Blair Cottrell, described by Burgess as “a natural leader”. Cottrell did not respond in equally friendly tones, calling Burgess “sea”» in a video posted on Facebook and since deleted.

THE DAY AFTER HE STEPPED DOWN,  Burgess changed his mind, blaming the decision on financial stress. Instead, he said he was just taking a break. According to the Sydney Morning Herald, Cottrell responded by quitting the movement, saying that he would found a new organisation and “possibly a political party”. He also happens to be the leader of the minuscule National Democratic Party of Australia, not much more than a one-man project. On Sunday, however, the UPF posted an online video showing Cottrell talking  about “forgiveness, death and rebirth”, while surrounded by a group of severe-looking men, one holding a beer bottle. In the video, he promises that the UPF will set up a political party and a media page, “to begin a three-pronged attack against the enemies of this nation”.

AS IF ALL OF THIS WAS NOT CONFUSING ENOUGH,  the Australian far right appears to constantly be splitting into new factions, including groups whose members have shown up at UPF events – such as Right Wing Resistance, which calls for  “resistance … against mass immigration, the dilution of our European culture and pride, and the current multicultural agenda created by the current government networks designed to destroy our colonial rights and identity”.

While Right Wing Resistance is unabashedly white supremacist, the United Patriots Front, on the other hand, claim that they are not racist, merely against Sharia law and radical Islamism. The very lyrics of Burgess’ former band the Eureka Brigade speak of a wider anti-Muslim focus, with lyrics like “We’ll shit on a mosque, she’ll be right, punch some Muslims and have a good time, Ralph Cerminara will show you his might” and “No sharia or halal, time to get the .50 cal. You’re my enemy, not my friend, we will fight you to the end. We like Buddhists, Sikhs and Jews, and the Christians too, but there’s no fucking room for you”.

Another central activist in UPF, Neil Erikson, was convicted last year after repeatedly telephoning Rabbi David Gutnick and  threatening to “come and get” him. Cottrell has also spent time in prison, an experience he has himself mentioned on Facebook, writing that he served a 19-month sentence for having torched the house of a man who had slept with his girlfriend. “I suppose I am not much of an intellectual”, Cottrell added.

HOWEVER, as he became a rising star in the fringes of the Australian far right, various media outlets have noted some of his earlier comments in social media, finding examples of what the Sydney Morning Herald describes as “anti-Jew, anti-woman and pro-Nazi views”. In one Facebook post, he said there should be a picture of Hitler “in every classroom and in every school”, and that Hitler’s book Mein Kampf “should be issued to every student annually”. In another Facebook post, he noted that the secret to keeping women faithful was to “care less about them and even crack them around the ear every once in a while”. He has also described Jews as “parasites”, and as “a much deadlier enemy than the violent Islamic pillagers, who just kill and maim openly”.

OBVIOUSLY, Cottrell is not likely to become a rising star in Australian politics. Victoria Police have called the UPF as a fringe group, and, in spite of its 22.000 Facebook followers.

IN THE MEANTIME, Burgess’ former political home, the Australian Defence League, has received renewed media attention. In a recent story in The Age, a former lieutenant of the group spoke out against his old comrades. He claims the group started as a result of legitimitate grievances among ordinary people, but adds that it has become “a combination of lunatics and rebuttalists and internet vigilantes”.  The man, speaking on the condition of anonymity, also said,  “It just comes down to hating everyone with a different opinion”.

The man – who left the Australian Defence League two months ago – also described the group’s former leader, the Ralph Cerminara mentioned in those Eureka Brigades lyrics as the one to blame. “Ralph just hates brown people”, the former ADL member told The Age. “I hate to say it, but it’s all about being brown with him”. Cerminara, a former gunner (private) in the Australian Navy who has been accused of falsely claiming that he served Afghanistan, denied making such statements. Today, Cerminara is no longer leader of the ADL, and in The Age expressed hope for future of the United Patriots Front. “Anyone who considers themselves a patriot should really join”, he said. 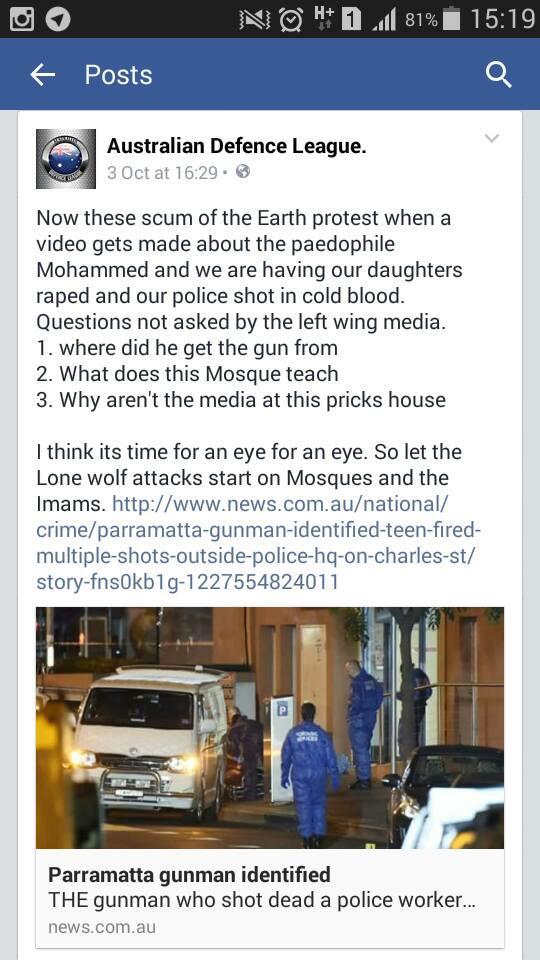 Screenshot from a now deleted Facebook page belonging to the Australian Defence League.

LONE WOLF ATTACKS. The ADL has also come under police investigation after a Facebook post in early October, following the Parramatta shooting, where a 15-year-old boy, Farhad Khalil Mohammad Jafar, shot and killed an unarmed police civilian finance worker in what may have been and Islamic State inspired attack. “I think its [sic] time for an eye for an eye. So let the lone wolf attacks start on Mosques and the Imams”, the post concluded.

The Facebook page – and that clear incitement to violence – has since been deleted. The risk of cumulative extremism, and of violent anti-Muslim rhetoric turning into actual anti-Muslim violence, has, however, not disappeared.

Hating Muslims – an HSI report
The IS media jihad

One Response to Fear, loathing and factions

"Hating Muslims" is a report on hate crimes whose perpetrators deliberately target Muslims. During the five-year period covered by the report,...