The Turkish charity Humanitarian Relief Foundation (IHH) has been accused of smuggling weapons in support of al-Qaeda in Turkey.

On the 1st of January 2014, Turkish authorities stopped a truck they claimed was carrying arms to Syria, according to news reports. The truck was reportedly seized in Adana, near the Syrian border, but details remain sketchy. Initial reports said the shipment belonged to the sometimes-controversial Turkish aid organization Humanitarian Relief Foundation (IHH). However, other news reports suggested that the truck may actually been part of an effort backed by the Turkish national intelligence bureau NIS to facilitate shipping weapons to Turkmen in Syria.

Earlier this week, Turkish police arrested at least 23 people in raids on alleged al-Qaeda targets, including the offices of the Humanitarian Relief Foundation in the southern city of Kilis, the respected U.S.-based newspaper Christian Science Monitor newspaper reported.

According to the Turkish daily Hürriyet, two senior al-Qaeda operatives were among those detained on such charges as  “sending people to fight in Syria, helping … al-Qaeda members to come from Afghanistan and Pakistan, collecting money to help al-Qaeda, providing and distributing aid and weapons to be used in attacks in Syria, Pakistan and Afghanistan and organizing illegal actions”.

The Turkish aid group has confirmed that its offices were raided, but denies any connection with al-Qaeda. “We see this as part of a dirty plot,” the charity’s vice president, Huseyin Oruc, told the Arab broadcaster Al Jazeera.

The IHH was established in the 1990s during the civil war in Bosnia Herzegovina and came into the world spotlight in 2010, following the Israeli boarding of the aid ship MV Mavi Marmara, which was headed to Gaza and was owned and operated by the group. During the raid, nine acitivists (eight Turks and one Turkish-American)  were killed, leading to widespread international condemnation and a serious deterioration of traditionally cordial relations between Israel and Turkey. The flotilla incident also led to the Turkish aid group being scrutinized by the news media, terrorism researchers and think tanks. Foreign policy blogger David Kenner cited a report written by Evan Kohlmann in 2006 alledging a broad range of contact between the IHH and a variety of jihadist groups with suspected ties to al-Qaeda. In 2010, Israel also added the organization to its terror watch list. However, IHH has vehemently denied having anything to do with terrorism. In an interview with the Los Angeles Times published in June 2010, IHH board member Ali Cihangir dismissed the allegations as politically motivated. The LA Times stressed that there is no proof of any connection between the foundation and al-Qaeda or it subsidiaries, but cited claims that “the foundation navigates in an opaque realm where charity rubs against militant radicalism”. 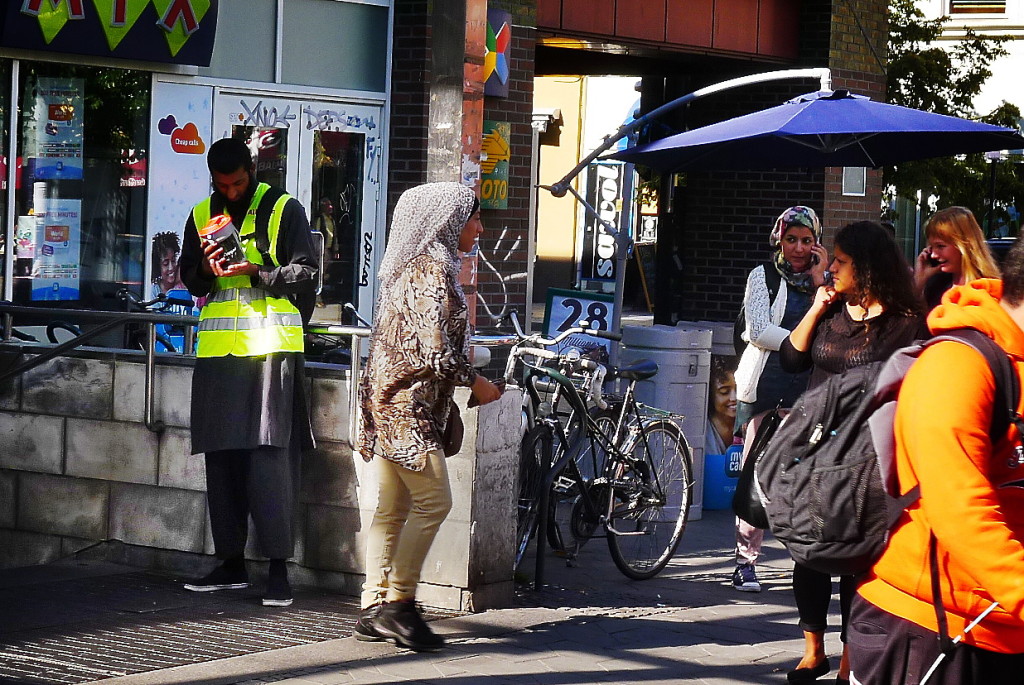 Al Furqan Relief collecting money it says will  go to Syrian widows and children in the Grønland neigbhourhood of Oslo, Norway. The Norwegian Islamist charity has said that it cooperates with the Turkish IHH and includes leading members of the allegedly extreme Islamist group Profetens Ummah. (Photo: Copyright SCANPIX/Nils Bjåland/VG).

A more recent example may be found in Norway. The Islamist charity Al Furqan Relief has routinely collected funds and clothing for Syria. On its web site, the group stated plans to ship aid to Syria this month, in cooperation with the IHH. The article was accompanied  a picture showing several Al Furqan activists, including Ezgon Avdyli, a former spokesman for Profetens Ummah (the Ummah of the Prophet), which Norwegian media has described as extremist. Avdyli has since left the leading shura – or council – of the organization. Several others believed to be associated with Al Furqant are also seen in the photograph.

In August, a former leading member of the Al Furqan Relief charity was arrested and charged with sponsoring terrorism. While he has since been released, the Norwegian-Algerian remains charged with financing terrorism, as well as with recruiting minors to fight in the Syrian civil war. The man, in his mid-thirties, and his lawyer say he is  innocent. However, sources within the Norwegian security services have previously told this reporter that the Al Furqan activist is known under the nickname “The Spider” (Edderkoppen), because of his coordinating role within radical Islamist circles in Norway. In fall 2012, he was also mentioned in a parliamentary briefing given by Grete Faremo, then Norwegian minister of justice.

The IHH itself has previously announced that it only cooperates with the German-based charity WEFA in Europe.

ANALYSIS: The far-left Turkish terrorist group DHKP/C has found some support in Europe, helping bolster its claim to be at...