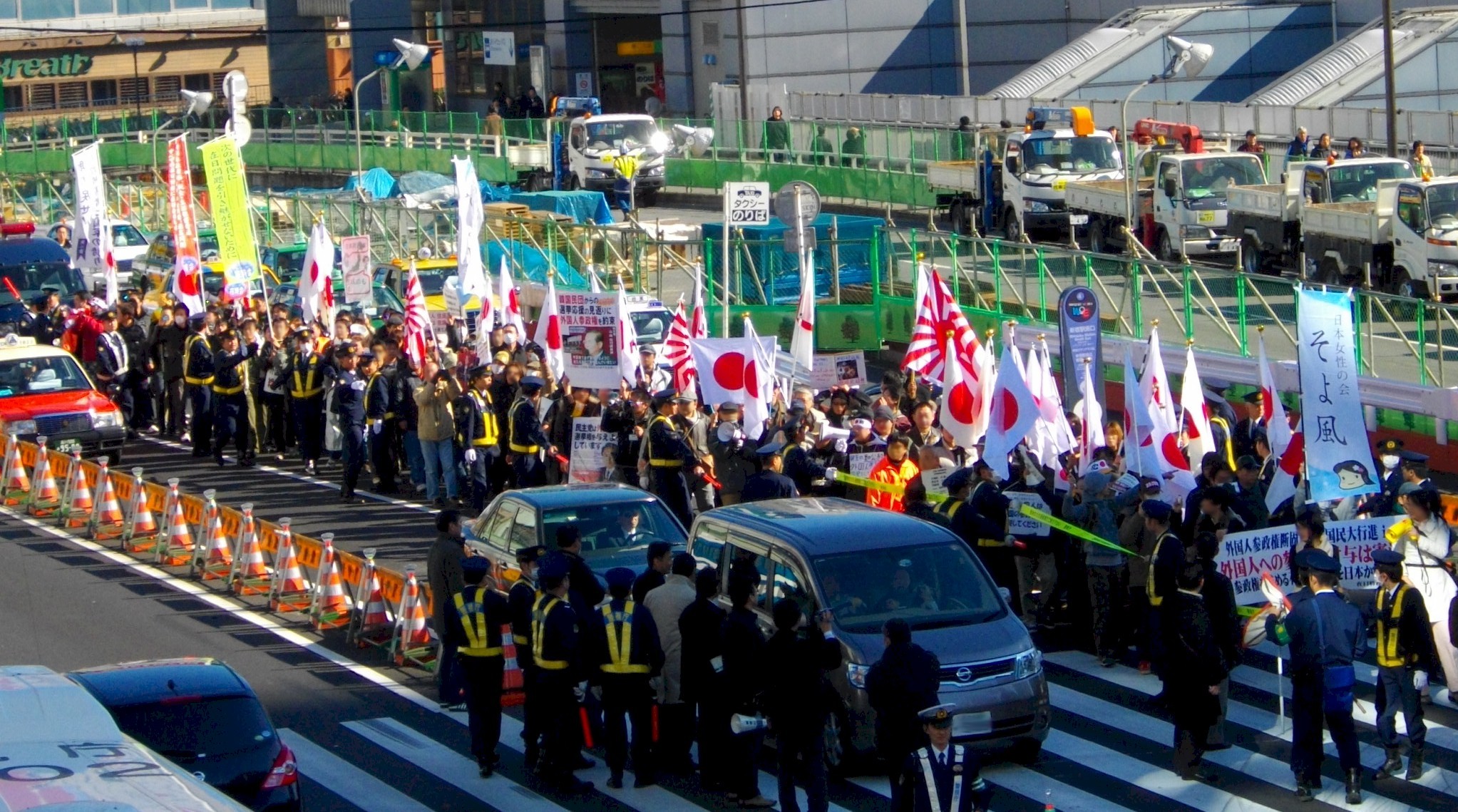 The Japanese anti-Korean group Zaitokukai was born on the Internet, and has taken to the streets with racist and violent slogans, targeting both Koreans and other minorities. It all sounds somewhat familiar.

In late September, nearly 2.000 people took part in a demonstration in Shinjuku, Tokyo. They came in reaction to repeated anti-Korean rallies held by far right groups in Japanese society. The Japan Times wrote about the Shinjuku rally in a recent editorial, noting that “hate speech has the potential to incite violence, [and] also intends to create a climate of fear”.

With Zaitokukai members at demonstrations shouting slogans like “Murder the Koreans!” and “Smash the Korean cockroaches!”, the newspaper’s worry is far from unreasonable. As of yet, however, actual violence has been limited to fistfights.

The group that has gained the most attention in the last few years is the Zaitokukai – or the Citizens against Special Privilege of Zainichi, a reference to so-called Zainichi Koreans, long-term residents of Japan who trace their roots to Korea under Japanese rule, as opposed to more recent immigrants from Korea. The Zaitokukai have harassed not only Koreans, however, but also Filipinos, Chinese, Burakumin and Westerners. Epithets like “White pigs! Go home!” have been hurled. The Zaitokukai have also picketed theaters showing the American movie The Cove, a critical documentary on dolphin hunting.

According to an article at East Asia Forum, abuse and harassment against minorities and foreigners are on the rise in Japan:

What factors are behind the recent emergence of the movement? One conventional explanation is that people are anxious about identity as poor economic conditions since the 1990s foster strong hatred against minorities and foreigners. Journalist Yasuda Koichi has held this view, while Tessa Morris-Suzuki explains the Zaitokukai by associating it with the ‘soft repression’ of the regime led by rightist Prime Minister Abe Shinzo. In contrast, Beverley Anne Yamamoto argues the group could be a backlash against a new discourse of multiculturalism in Japan.

To me as a journalist covering extremism in Europe – both the extreme right and European-based radical Islam (whose practitioners very often are European-born) – the most interesting single factor in the birth and development of the Zaitokukai is the role of the Internet. In Japanese media, both Zaitokukai and other, smaller groups have been described as the Internet far right. The journalist Koichi Yasuda – who has written a book on the group titled Pursuing the Darkness of Internet Patriots, the Zaitokukai – points to their use of the gigantic Internet forum 2Channel and to the importance of videos spread on Nico nico douga, a Japanese equivalent of YouTube. There they find their propaganda and there they acquire their world view, in which – according to Yasuda – they see themselves as weak and downtrodden, and as victims of reverse discrimination. In addition, as Yasuda explains in this interview with the English-language edition of the Korean newspaper Dong-A Ilbo, they embrace both anti-Korean ideas of a general nature and outright conspiracy theories.

Another interesting insight into Zaitokukai was recently given by Natsuki Kimura on open.salon.com:

Personally, however, I am not reminded of the Ku Klux Klan – even if the Klan did turn to the Internet a long time ago. Instead I am reminded of another Internet phenomenon that, like the Zaitokukai, has taken to the streets: the English Defence League.

Radicalization in a historical context

The Greek newspaper Kathimerini writes of mounting evidence against members of the extreme right-wing political party Golden Dawn after the...