The Ukrainian right-wing extremist Pavlo Lapshyn will be jailed for at least 40 years after admitting to the murder of an 82-year-old man and the placement of bombs outside several mosques in the English West Midlands. 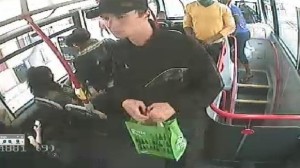 On Monday, the 25-year old Ukrainian admitted to murder, three bombings and the preparation of terrorism acts. Today he was sentenced to life imprisonment, meaning that he will remain in prison for at least 40 years.

When the police raided Lapshyn’s apartment, they found chemicals and bomb-making equipment, enough to make another three devices in addition to those he left outside mosques in Walsall, Wolverhampton and Tipton, all in the West Midlands. They also discovered a camera containing photographs and videos, some showing Lapshyn making bombs and detonating them in the Ukrainian countryside.

HSI has previously written of Lapshyn’s online activities. In court, more information found on Lapshyn’s computer was presented. The day after the murder of 82-year-old Mohammed Saleem, Laphsyn created a number of files on his computer containing neo-Nazi and other right-wing extremist material, including an audio file: “You must murder”. He also included several images from the aftermath of the Boston Marathon bombing last April. 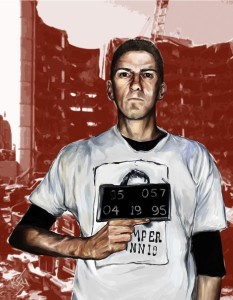 A picture of the Oklahoma City bomber, Timothy McVeigh, posted by Lapshyn online.

Two weeks later, he created a file containing a picture of a knife with the caption “Mohammed Saleem was stabbed by”, and below the knife, “£10,000 reward – small price. May be £1,000,000?”, and a picture of a Smiley-style face with the slogan “White Power”. The police believe Lapshyn’s intention might have been to send taunting messages to investigators. On his computer, a copy of the computer game Ethnic Cleansing, was also found.

This rather notorious computer game was developed by Resistance Record, an underground music label owned by the American right-wing extremist group National Alliance, and released in 2002. In the game, the player can choose to play either a skinhead or a Klansman, and the goal is to kill African-Americans, Latinos and Jews, and features Ariel Sharon – the former prime minister of Israel – as an “end boss” who must be killed to win the game. In 2010, UGO.com rated it as the most racist video game in history.

In early July, Lapshyn created another file on his computer containing a picture of a hunting knife similar to the one he had used in the murder of Mr Saleem, as well as a document showing a Google map of the Wolverhampton Central Mosque with a circle and an arrow pointing to it with the word “Bomb”, and the text:

There is a bomb near Wolverhampton Mosque. Maybe there are other bombs near this mosque. We need news about this event. […] Please check

Screenshot from the web site of The Association of White Political Prisoners, one of the extremist sites Lapshyn visited.

Once again, the message was signed with a Smiley face and the words “White power”. The document was directed to the police, but never sent. After his arrest, Pavlo Lapshyn stated to police that his attacks were motivated by a wish to “increase racial conflict”.

While neither police nor independent researchers have been able to find right-wing extremist messages posted on social media by Lapshyn prior to his move to the United Kingdom, he was arrested in Ukraine three years prior to his terror campaign, after experimenting with bomb-making chemicals in his parents’ apartment and causing an explosion that smashed windows, cracked a wall and blew out the front door. He was eventually fined on charges of “hooliganism” and “producing, saving, transporting and using pyrotechnics”, reports the Daily Mail.

In an interview with the Daily Mail, Lapshyn’s father, Sergey, says that the family is at a loss to understand how their son could end up as a terrorist. The father also revealed that his own mother, Lapshyn’s grand-mother, was a Volga Tatar and – in her childhood – a Muslim.

The Ukrainian student Pavlo 'Pasha' Lapshyn pleaded guilty on Tuesday to the murder of an 82-year-old Muslim man and three...