Two of the foremost leaders of the Somali extremist group al-Shabaab have previously lived in Sweden, resulting in the recruitment of young Scandinavian Somalis to jihadism.

AFTER THE DEATH of al-Qaeda leader Osama bin Laden in May 2011, the leadership of al-Shabaab called a press conference to praise bin Laden. Present at the podium was a man who had lived in Sweden a few years earlier. His name was Abdulkadir Mumin, and it was his first official appearance on behalf of the Somali terrorist group. In time, he was to become a leading theological figure within al-Shabaab.

Mumin’s ascendancy within the Somali terrorist organization followed a path depressingly familiar to Swedes. Several people who have risen to leadership roles in the global al-Qaeda network have also emerged from Sweden, where they have been able to mount efforts supporting terrorism and gather recruits.

One was Mohamed Moummou. Moummou advanced to become al-Qaeda’s  second-in-command in Iraq before he was killed in battle with American forces in Mosul in 2008. In Sweden, he had been active in a small group of Muslims in Brandbergen, outside of Stockholm, that held extremist views and recruited volunteers to al-Qaeda training camps in Afghanistan in the 1990s. According to a source close to Moummou, one man who travelled to Afghanistan later became a key al-Shabaab leader: Fuad Mohamed Khalaf, more commonly known as Fuad Shangole. Today, Shangole is considered one of the leading commanders of al-Shabaab, and the US State Department is offering a $5 million reward for information that brings him to justice.1

FUAD SHANGOLE was born in 1965, and arrived to Sweden from Somalia in 1992 as a political refugee. For several years, he preached in a small mosque in the immigrant-heavy of Rinkeby suburb of Stockholm. One source, who knew Shangole at the time, says he never learned much Swedish, and used Arabic instead. The same source says that Shangole would yell “We are the fighters of al-Qaeda!”.  Other witnesses confirm that Shangole spread an extremist message. A one-time friend told the Swedish news site Nyheter24 that Fuad Shangole encouraged jihad, and that he spoke of exterminating Americans and Jews. According to the former friend, Shangole was rhetorically gifted, and able to spellbind his audience.

The Swedish security police became aware of the radical preacher, and he was called in to several interviews. It is believed that this is one of the reasons he abandoned Sweden in 2004, after 12 years in the Scandinavian country, and returned with his family to Somalia. There, he joined the coalition of Islamist groups known as the Islamic Courts Union (ICU), which strove for control in the largely lawless country. In 2006, ICU managed to control large parts of Somalia, including the capital Mogadishu. However, the coalition was soon driven out of the capital, through the intervention of Ethiopia. 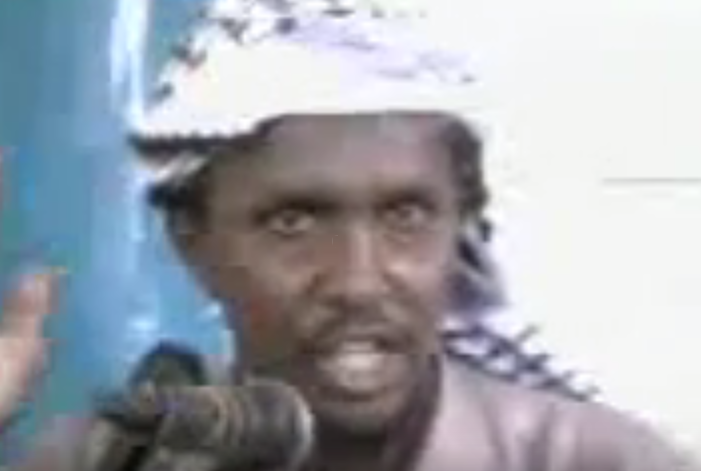 Fuad Shangole, screenshot from a video spread through social media.

Fuad Shangole had been named Minister of Education by the Islamic Courts Union, and is said also to have been responsible for the recruitment of foreign fighters.2. Across the Somali diaspora, there was a certain degree of support for ICU, and in 2006 Fuad Shangole and other leaders received a delegation that had travelled from Sweden to hand over funds gathered in support of the organization. Shangole took care to encourage Somalis in Europe to return to their home country, rather than live amongst “unbelievers”, and he used himself and his family as an example.3

Later that year, al-Shabaab was created as a splinter group from ICU, and Shangole would become a central leader there. He has become known as a brutal and ruthless upholder of Sharia law in areas under al-Shabaab control. In a notable 2008 case, a 13-year-old girl named Asho Duhalow underwent stoning after reporting that she had been raped by three men. In the eyes of al-Shabaab and of Fuad Shangole she was guilty of fornication, and thus sentenced to death.4.

Following Ethiopia’s invasion, interest in joining al-Shabaab grew amongst Somali youngsters in the West, and the group also carried out a recruiting campaign targeting the Somali diaspora. The fact that Fuad Shangole had previously been active as a preacher in Sweden, and had a leadership role in the group, led to a relatively high number of recruits from Sweden, and from Rinkeby in particular.5  In 2008, a former youth club leader called Yassin Ismail Ahmed was also actively recruiting youths for al-Shabaab. According to the Swedish security police, some 30 people left Sweden to join al-Shabaab in this period.6

The second-largest city in Sweden, Gothenburg, has also played a central role in the Nordic network of al-Shabaab sympathizers, which also stretches to the neighbouring countries of Norway and Denmark. In recent years a considerable number of people have left Gothenburg to join al-Qaeda-inspired groups in Syria and Iraq. A few years back, however, most such jihadist travellers went to Somalia.

The Salafi-oriented Bellevue mosque in Gothenburg’s Gamlestan district has been identified as a key to this radical milieu. The congregation has actually been divided, but Fuad Shangole preached there several times, and in 2009 the mosque’s leadership invited Sheikh Hassaan Hussein to visit. The Kenya-based Hussein, often seen as the unofficial mufti of al-Shabaab, visited several Nordic cities during his trip, which was partially a fund-raising effort.7 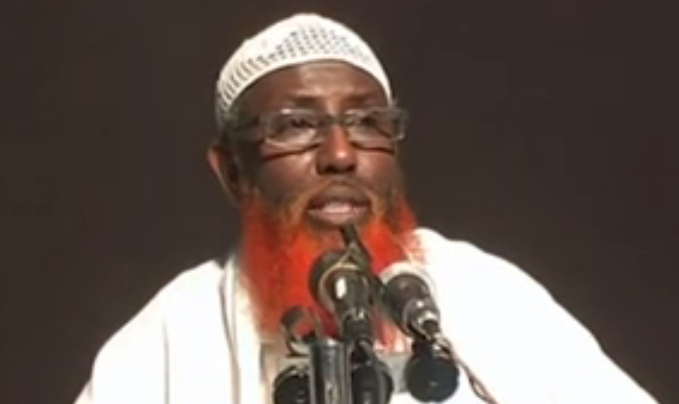 Abdulkadir Mumin, screenshot from one his video-recorded sermons, easily available through YouTube

It was at the Bellevue mosque, too, that Abdulkadir Mumin – later the theological leader of al-Shabaab – was active during the 1990s and the early 2000s. Mumin came originally from Somalia’s Puntland region. In Sweden, he resided with his family in the Hjällbo area of Gothenburg, a largely segregated part of the city, immigrant-heavy and suffering from high unemployment. A source who resided nearby and who heard several of Mumin’s lectures describes him as increasingly radical.

Abdulkadir Mumin left Sweden in the early 2000s after receiving unwelcome attention in a Norwegian TV documentary also broadcast on Swedish television.8.  Using a hidden camera, the TV crew filmed Abdulkadir Mumin acting in his role as a religious leader. He stated that he would have his own daughter circumcised. In Gothenburg, social authorities started an investigation into Mumin’s family.

After about a year he surfaced in the United Kingdom, where he remained active for years in radical Somali groups.9  At least once, he returned to Gothenburg and to the Bellevue mosque, speaking there during an annual summer conference in the mid-2000s.

As recently as in early 2010, he took part in a press conference in London with the organization CagePrisoners (now called CAGE) and with the former al-Qaeda member and Guantanamo Bay prisoner Moazzxam Begg as CagePrisoners presented a critical report on the fight against terrorism in East Africa. Later that year, Abdulkadir Mumin left the UK to settle in Somalia for good. After a short period in Kenya, he entered the country through the border town of Beled Hawo, then under al-Shabaab control. He then preached to hundreds of supporters in a mosque, burning his British passport and promising to dedicate the rest of his life to jihad.10

Terrorism experts have since seen Mumin as al-Shabaab’s leading ideologist. He has often spoken on behalf of the organization, employing belligerent language. “We will never stray away from the path of Osama, and we will continue our holy war until we taste death like our brother Osama, or until we are victorious and rule the entire world,” he said during his first public appearance with al-Shabaab, after Osama bin Laden’s death in May 2011.

In 2012, al-Shabaab swore allegiance to al-Qaeda, and Sheikh Abdulkadir Mumin welcomed the move, telling British journalists that unity would allow them to fight their enemies, the infidels, wherever they are.  A news site friendly to al-Shabaab pointed to Mumin to explain the necessity of battling against parts of Somalia’s own population, and even brought up Mumin’s Swedish connections:

The government in Puntland are non-believers, and one has to carry out jihad against this government. A sheikh who left Sweden, and who belongs to the clan Ali Saleebaan, originally from Puntland, has judged Puntland and its population, because they are non-Muslims. This sheikh comes from Gothenburg.

Another online Somali-language newspaper wrote that Mumin often brings up his Swedish background when preaching jihad:

Sheikh C/qadir Muumin, a Quranic scholar with Swedish citizenship, is amongst the men that reached the mountainous area. He usually preaches to youths in Ceelasha Biyaha through telling them about how he emigrated from the United Kingdom and Sweden, and that he seeks jihad and heaven in Somalia. But now, he has once again fled to a place where he believes he can hide.

From his hideout in the mountains of Puntland in northern Somalia, Abdulkadir Mumin sent a new message in the autumn of 2015 that indicated a split within al-Shabaab. Using propaganda, Islamic State (also known as ISIS, ISIL or DAESH) has tried with only limited success to win supporters amongst the al-Qaeda-loyal al-Shabaab. So when Mumin and some other al-Shabaab members swore their allegiance to the Islamic State in a video last autumn, it was a clear a propaganda victory for the self-declared caliphate ruling parts of Syria and Iraq.

“We, the mujahideen of Somalia, declare allegiance to the caliph as Ibrahim ibn Awad ibn Ibrahim al-Awad al-Qurashi,” Mumin said in a reference to the Islamic State leader better known as Abu Bakr al-Baghdadi, according to a recording quoted by Reuters.

Even though Abdulkadir Mumin claimed to speak on behalf of “the mujahideen of Somalia”, the split within al-Shabaab appears limited. Only 20 of the 300 or so al-Shabaab-fighters that had been in Abdulkadir Mumin’s entourage chose to follow him to a new place and swear allegiance to IS. The other 280 remained.

The leadership of al-Shabaab also remains loyal to al-Qaeda, and in recent months the organisation’s intelligence service, Amniyat, has arrested and jailed several al-Shabaab members on suspicion of disloyalty. Abdulkadir Mumin is believed to remain somewhere in the mountains of Puntland in northern Somalia, outside the reach of Amniyat.  It remains to be seen what the next step in his jihadist career will be, but the connections linking Sweden to various parts of the global jihadist movement are still strong.

Magnus Sandelin is a Swedish journalist and author of the book Jihad: Svenskarna i de islamistiske terrornätverken (Jihad: The Swedes in the Islamic Terror Networks).
View all posts by Magnus Sandelin →

Tech-savvy young media producers are boosting the Islamic State’s allure with increasingly competent presentation skills and graphics to enhance the...