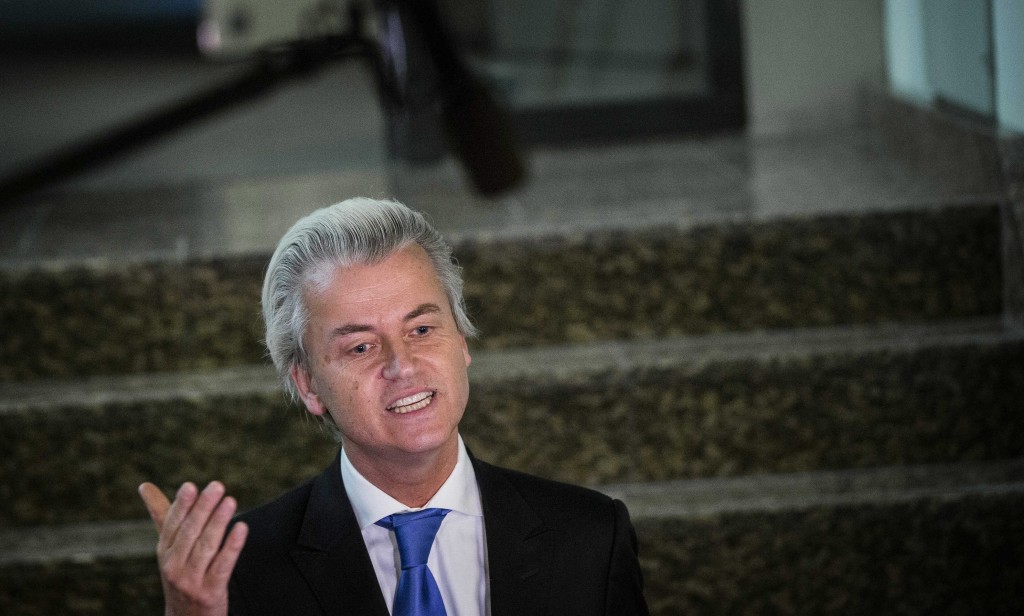 Dutch Party for Freedom (PVV) leader Geert Wilders speaks during a press conference in The Hague, The Netherlands, 22 March 2014. Wilders led his followers into an anti-Moroccan chant during a party rally, after the Dutch municipal council elections held on 19 March. Photo: Scanpix/EPA/BART MAAT

“Thus, I ask you, do you want more or fewer Moroccans in this country, in this city?” Geert Wilders asked his audience in The Hague on the night of 19 March 2014 Dutch local elections. “Fewer, fewer,” the crowd shouted. “Good, then we will take care of that,” the controversial politician replied. However, for some members of his Party for Freedom (Partij voor de Vrijheid, PVV), the statement became “een brug te ver” or “a bridge too far”.

Within days, the leader of the party’s European parliament delegation – former TV presenter Laurence Stassen – withdrew, saying she regretted that she could no longer represent the PVV. Roland van Vliet left the party’s Dutch parliamentary group, telling RTL Nieuws television news that he had to speak out against Wilders’ anti-Moroccan statement because “there are so many Moroccans who do well in the Netherlands”. In Friesland Province, two of PVV’s three remaining members in the regional parliament, Otto van der Galïen and Peter Buisman, stepped down. A fourth MP, Jelle Hiemstra, left the PVV back in October 2011, just a few months after that election. In Utrecht, regional parliament member Henk Scherer quit, describing Wilders’ statement as “sickening”. In The Hague, Chris van der Helm, a local council member, withdrew. In Almere, the largest city in Flevoland Province, most of the PVV group threatened to resign, but stayed on only after publically distancing themselves from Wilders’ statements.

Dutch media started calling it “an implosion”, something not entirely new in the Netherlands’ politics. In 2002, the Pim Fortuyn List (Lijst Pim Fortuyn, LPF) won 17 per cent of the votes in an election held just days after left-wing extremist Volkert van der Graaf assassinated the party’s leader, Pim Fortuyn. The party joined a coalition to form the first cabinet lead by Prime Minister Jan Peter Balkenende, of the Christian Democratic Appeal (CDA) party. The collation collapsed less than three months later, due largely to internal strife within the LPF. New elections were held in January 2003 and the LPF lost about two-thirds of its backing and disintegrated within three years. However, while the PVV slipped in March opinion polls from first to second place in the backlash from the anti-Moroccan speech in The Hague, the party still has more support than it did in the 2012 elections.

Despite massive criticism from the media, other politicians and within his own party, Wilders has refused to apologize and appears to still have widespread support: In March, Reuters reported that 85 per cent of the people who voted for him last time said they would do so again, making the controversy seem more like a step on Wilders’ career path than a sign that the PVV’s days are numbered.

Ideological development
Born in the Limburg Province town of Venlo in 1963, Wilders started his political career at age 27 as a speechwriter and parliamentary aide. In 1997, he was elected to the city council of Utrecht and, the next year, became a member of parliament for the then-liberal People’s Party for Freedom and Democracy (Volkspartij voor Vrijheid en Democratie, VVD). Wilders is sometimes described as a former student of Frits Bolkestein, a noted politician who steered the VVD in a more conservative direction.

In 1991, at an international conference of political liberals in Lucerne, Switzerland, Bolkestein talked about what he saw as the limitations of multiculturalism. He followed up with article in the major Dutch newspaper Volkskrant, calling for a more courageous debate and saying that certain core values, such as separation of church and state, freedom of speech, tolerance and non-discrimination, where indisputable and had to be accepted by all “whether Muslim or non-Muslim”.

“Those who deny cultural relativism can still cherish pluralism. Everyone in the Netherlands can walk and stand where he wants to, say what he wants to, eat his own food, choose his own clothes and follow his own faith,” he said.

In 1994, Bolkestein wrote a book together with Mohammed Arkoun, an Algerian scholar of Berber descent who is known for advocating Islamic modernism and secularism. In short, Bolkestein delivered a liberally founded criticism of Islam and of what he regarded as “cultural relativism” of the Dutch establishment. His 1991 speech and article are sometimes seen marking the start of the debate on immigration in the Netherlands, even though a series of strongly nationalist – some openly racist – parties had railed against immigration for years. Bolkestein also introduced a new style in Dutch politics, presenting himself as someone who dared to break taboos and face facts.

Wilders appears to have drawn on that style, but moved far away from Bolkestein in terms of ideology. In 2011, Bolkestein called Wilders “a short-lasting comet” with an obsessive focus on Islam. Wilders’ change started in the early 2000s, when he went in a neo-conservative direction, supported by historian and journalist Bart Jan Spruyt and the Dutch Edmund Burke Foundation, as well as drawing inspiration from such American think tanks as the American Enterprise Institute and the Heritage Foundation. He began suggesting measures against what he saw as threats to Dutch society including: pre-emptive arrests, administrative incarceration, revoking citizenships and deporting suspects.

In 2004 he broke with the VVD over a row of the party’s view on Turkey’s possible EU membership and remained in parliament as an independent.

The most important change in Wilders’ politics was, however, his increasing hostility towards both Islam and Muslims. He started calling Islam a totalitarian ideology and a threat to the West that he said must be met with a “liberal Jihad”. Soon he went even further, blaming Islam as the root cause of problems ranging from youth crime and unemployment to the 2005 riots in Parisian suburbs. On 22 February 2006, he established his Party for Freedom, or the PVV, while also publishing an ambitious ideological document, strongly influenced by conservative Dutch historian and writer Bart Jan Spruyt. Central to Spruyt’s neo-conservatism was idea of a conservative effort to promote decency, ambition and discipline.

Just a few months later, Spruyt left the PVV, which he has since described as “the incarnation of a panicked kind of conservatism which takes the middle position between prudent conservatism and fascism and which has a natural tendency towards the latter”.

“Ban that fascist book”
Once again, Wilders changed course and started moving in the direction of right-wing radical parties such as Vlaams Belang in neighbouring Belgium, even if he still kept his distance. He also embraced an increasingly radical variant of anti-Muslim thinking: Starting in 2007, he began to cite Bat Ye’or’s (the penname of Egyptian-born British Jew Gisèle Littman), “Eurabia” theory, the idea that Europe is being turned into an Islamic continent, with the willing participation of traitorous political elites. In August that year, Wilders suggested banning the Koran:

“I have been saying it for years: There is no such thing as ‘moderate Islam’. Those who refuse to believe this should read the text of a speech by the Italian writer Oriana Fallaci (who, unfortunately, died last year), which she held in New York on November 28, 2005, when she was awarded a prize for her heroic resistance against Islamofascism and for her battle for freedom… The Hague is a lair of cowardice. It is full of scared people who were born as cowards and who will die as cowards, … who simply ignore the interests of Dutch citizens and collaborate in the transformation of the Netherlands into Nether-Arabia, as a province of the Islamic super-state of Eurabia.

In addition to an increasingly fringe view of Islam, with elements of conspiracy thinking, Wilders and his party have become more hostile toward other immigrant groups, including Poles, Bulgarians, Romanians and those the Dutch Antilles. In economic policies, Wilders has moved away from the neo-liberalism.

It has worked. In the 2010 elections, the PVV became the third-largest party in the Netherlands. In all likelihood, Wilders was helped by facing racism charges in court. While Wilders’ opponents have had no problem in listing his hard-line stances – he has called for an end to non-Western immigration, shutting down mosques and a special taxation for women wearing the hijab – he was acquitted of racism in a trial that became a public relations triumph for Wilders and his backers.

The master of anti-politics
In the far from unified landscape of the European radical right, Wilders’ party has been the odd one out, difficult to classify and largely a one-man show. Its media strategy is also unusual. In 2009, the journalist Karen Geurtsen of the Dutch current affairs magazine HP/De Tijd, traditionally considered right wing, decided to go undercover in the party after being told by colleagues how difficult it was to get interviews. In January 2010, the magazine started running a series of articles on the party that were intended to prove that PVV politics were actually anti-politics. One story had a telling quote from her boss in the PVV, Raymond de Roon, during Geurtsen’s party training period:

“It is actually very simple. Do not delve to deeply into the material: It is about media attention … Islam is bad; the government is bad; other parties are bad. And the PVV is, of course, good. That’s the starting point. Internally, we may talk in a nuanced matter about the topics, but not externally. Then everyone will fall asleep and the journalists first.”

That is one way to look at Wilders and his party: masters of anti-politics. The PVV profiled itself not only as fundamentally anti-Islam and anti-immigration but also as opposing the political elite, being against the “linkse kakerlakken” (leftist cockroaches) and everyone else. That has made Wilders an idol of sorts in so-called counter-jihadist blogosphere and for aspiring anti-Muslim politicians in other countries.

But now, yet again, Wilders is steering his party in a new direction: In the past he avoided open cooperation with such traditional radical right-wing parties such as the Flemish Vlaams Belang and the French Front National, fearing a political backlash. Last year, however, Wilders started forging an alliance with both of the parties. In this light, his anti-Moroccan speech is no surprise.