The relationship between Hamas and Egypt has continued to deteriorate since an Egyptian court in essence outlawed the militant organization last month, increasing pressure on the Hamas-ruled Gaza Strip. 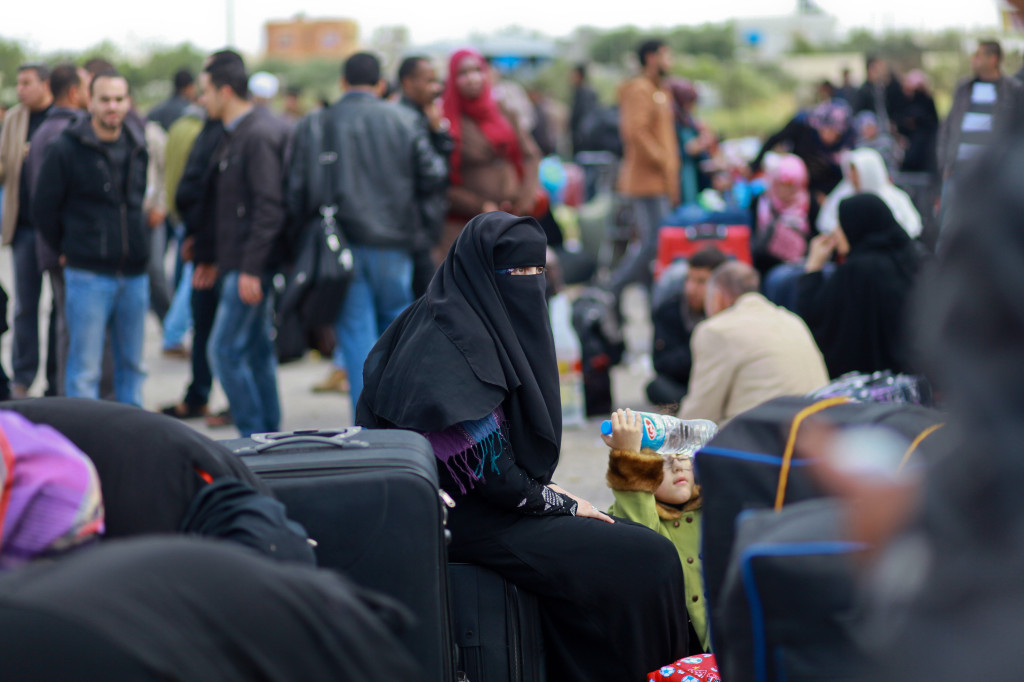 A Palestinian woman sits on her luggage as she waitis to cross Egypt at the Palestinian side of Rafah border between southern Gaza Strip and Egypt on, 30 March 2014. Egyption authorities partially reopened Rafah border crossing for three days after 50 days of its closure. (Photo: SCANPIX/Ahmed Deeb/NurPhoto/Sipa USA. Copyrighted.)

In early March the Cairo Court for Urgent Matters temporarily banned the Palestinian militant group Hamas from operating in Egypt, following a lawsuit by Samir Sabri, a well-known Egyptian attorney.

Dr Sabri’s struggle against Hamas began after a terrorist attack in Egyptian Rafah – near the border of the Hamas-held Gaza Strip – in August 2012. The attack resulted in the deaths of 16 Egyptian soldiers. The Egyptian armed forces issued a statement at the time accusing “elements from the Gaza Strip” of taking part in the attack, but Hamas denied any involvement.

Anwar Aslan, a law professor at Cairo University, says he believes the Egyptian court ruling may have an impact in other Arab countries, where similar measures may be taken. In an interview with HSI, he also said the decision will negatively affect the population of the Gaza Strip – about 1.7 million people. “The queues of patients and students seeking to get medical care and education on the Egyptian side of the border will be longer at the Rafah crossing,” he said.

Senior Hamas leaders have condemned the ruling, but Maj Gen Adel Soliman, the director of the Future and Strategic Studies Center, told HSI he does not believe the impact will be significant because relations between Hamas and the current Egyptian regime were already tense. The only senior Hamas figure known to reside in Egypt is Mousa Mohamed Abou Marzouk, deputy leader of the organization’s political bureau, whose visa will reportedly expire this month.

Hamas has governed the Gaza Strip since 2007. The organization is considered an offshoot of the Egyptian Muslim Brotherhood, the Islamist political party which the Egyptian authorities have declared to be a terrorist group. The Muslim Brotherhood has been systematically repressed in Egypt since July 2013, when the army ousted then-President Mohamed Morsi, the Muslim Brotherhood political leader who had been elected Egypt’s leader after the fall of Hosni Mubarak during the Arab Spring. Hamas has been a secondary target of this crackdown, and Hamas officials have been accused of espionage and of fomenting militancy in Egypt’s Sinai Peninsula.

Dr Sabri’s lawsuit pointed to a number of attacks in which he alleged Hamas had been involved, including bombings and kidnappings. He also pointed to the arrest of seven Palestinians who were in possession of maps of military installations. The Court for Urgent Matters concluded its decision with a de facto ban on Hamas and associated groups, although the ruling was defined as “temporary”.

Deteriorating relationship
The ruling can also be viewed in a wider context. As HSI has reported, the Egyptian government faces challenges from Salafi jihadist groups such as Ansar Beit el-Maqdis in Sinai. As Sinai’s neighbour, Gaza is seen as a security threat, and the new Egyptian regime has adopted a number of restrictions on movement and trade. Last month’s ruling is another sign of deteriorating Hamas-Egypt relations in the post-Morsi era, and it adds to the strategic distress of the Palestinian militant group.

Hamas official Musheir al-Masri insisted the decision would affect neither Hamas nor the “resistance”, and said that the ruling would only benefit “the Zionist enemy”, i.e. Israel.

The court decision led to demonstrations in the Gaza Strip. In one recent demonstration, tens of thousands rallied to commemorate three top Hamas leaders, Reuters reports. In a speech to the rally, the head of the Hamas government, Ismail Haniyeh, said that “the punishment of the people of Gaza must end”. He added: “We are living through a difficult stage and harsh challenges, but we are not terrified and we are not defeated. We have become familiar with difficulties and this stage is not the most difficult.”

Ahmed Assaf, a spokesman for the rival Palestinian organization Fatah, said the ruling was a result of Hamas interference in Egypt’s internal affairs.

Wilders into the wilderness
“White power” attack hits US

Wilders into the wilderness