Jihadists from Belgium and the Netherlands appear to have held American journalist James Foley during a period of his captivity in Syria. The leader of the captors, reportedly a Dutch-Moroccan, may himself have been executed by the self-declared Islamic State. 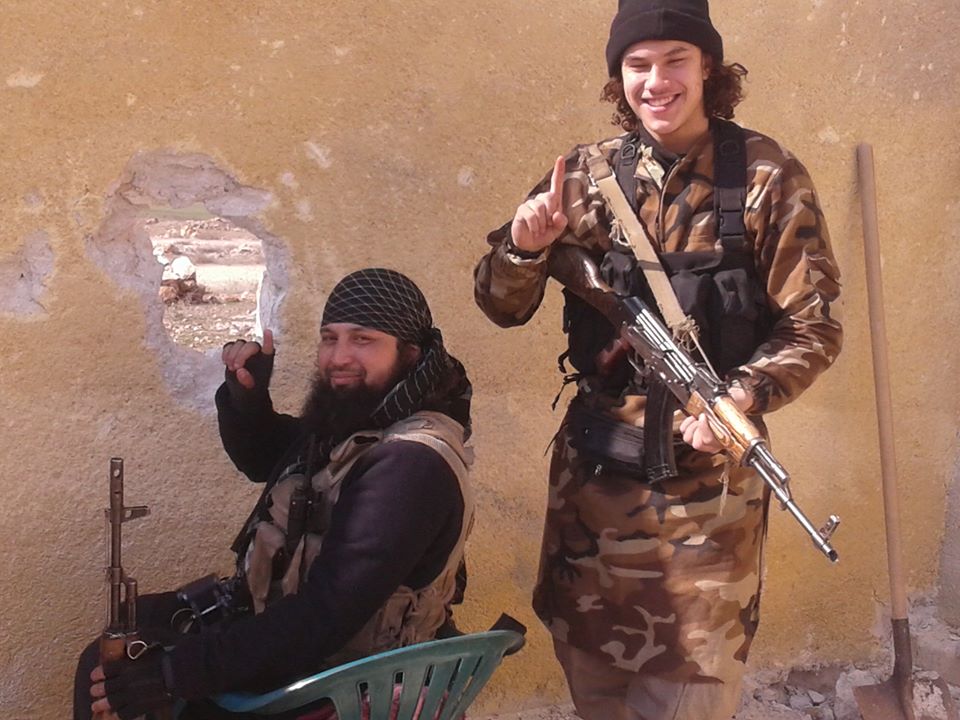 Hicham Chaïb (left) is amongst those accused of holding Jejoen Bontinck imprisoned. The picture, taken from Chaïb’s now defunct Facebook profile, shows him with another Belgian, Brian De Mulder.

A propaganda video of Foley’s beheading last month caused revulsion around the world.

Philip Balboni, Foley’s employer, revealed afterward that the journalist had shared captivity with Jejoen Bontinck, a one-time Belgian jihadist locked up by his own confederates in 2013 for suspected disloyalty. That links Foley’s imprisonment, which began in November 2012, to a rogues gallery of Belgian and Dutch jihadists named in a recent Belgian indictment.

“It was luck that brought the first word that Jim was alive and where he was being held,” Balboni, the chief executive of his employer GlobalPost, an American news site, told NPR. “And it came from a young Belgian, who had gone to pursue jihad in Syria and had been brought home by his very brave father. And he had befriended Jim and had been held in captivity with Jim in northern Syria. And that was the first time we had detailed information and knew that Jim was alive and that he was being held by a jihadist group.”

Jejoen Bontinck’s story has been reported by Hate Speech International in the past.

Lawyer: Bontinck never held by IS
The young Belgian was raised a Catholic by his Belgian father and Nigerian mother in Antwerp. In interviews, his father Dimitri has said Jejoen was brainwashed by the organization Shariah4Belgium, and specifically by its leader, Fouad Belkacem, also known as Abu Imran. The son eventually left Belgium, claiming that he intended to study in Cairo. In fact he went to Syria. He has claimed that he did not go to fight, but to provide humanitarian assistance to the Syrian people.

Only a month after entering the war-torn country – in March 2013 – he reportedly wanted to return home. However, by then his fellow Shariah4Belgium recruits in Syria saw him as a traitor or even as a possible spy, and he was imprisoned by them somewhere in Aleppo.

In an interview with the Belgian newspaper Het Laatste Nieuws, Bontinck’s lawyer, Kris Luyckx, said Bontinck was never held by the so-called Islamic State (IS, previously called ISIS or ISIL). Many of Bontinck’s former comrades from Belgium have now joined IS, but back then they were fighting under the banner of another extremist Islamist group, either Majlis Shura al-Mujahideen or Jabhat al-Nusra. The fact that Bontinck was held with Foley may indicate that the American journalist was abducted by members of one of these groups. IS was formally established months after Foley’s abduction.

“Bontinck and Foley shared a cell for at least three weeks around August of last year [2013],” Luyckx told Het Laatste Nieuws. He added that they were not the only westerners there; there was also a European journalist. Apparently, the two reporters were later transferred to the city of Raqqa. By the time US forces mounted a secretive rescue attempt in Raqqa on 4 July 2014, however, Foley had been moved again, this time to a facility in the Aleppo area, where IS had taken control of several villages.

According to Luyckx, Bontinck never met Foley’s killer, a man known as “John the Beatle” and widely believed to be the former British rapper Abdel-Majed Abdel Bary, a 23-year old Egyptian-British from west London.

The Belgian judiciary has indicted no less than 13 people for taking Bontinck hostage in Syria, and some of them may also be suspects in Foley’s case. On his website Emmejihad, Belgian journalist Guy Van Vlierden reports that four of those indicted have already been killed while fighting in Syria: Houssien Elouassaki of Vilvoorde, Nabil Azahaf of Brussels, Nourredine Abouallal of Antwerp and Yassine El Karouni, a Dutchman who apparently has also lived in Antwerp. Of those believed to be alive, the highest ranking is Hicham Chaïb, also known as Abu Haniefa, a leading figure in Shariah4Belgium. The others are Azeddine Kbir Bounekoub, Said M’Nari, Brahim El Mimouni and Fouad Akrich of Antwerp, Zakaria Asbia and Magomed Saralapov of Vilvoorde, Rachid Iba of the border town Maaseik and Redouan Akdim of Naarden in the Netherlands.

The Belgian newspaper Het Laatste Nieuws – where Van Vlierden works – has recently elaborated on the story. According to the newspaper, Jejoen Bontinck has revealed that the leader of the prison where Foley and he were held was another Dutchman. The newspaper gave his nom de guerre as Abu Ubaida al-Maghribi, which may indicate Moroccan roots.

According to the Dutch newspaper De Telegraaf, Abu Ubaida has an engineering degree. A man of the same name was recently executed by IS, according to a number of news sources, including the Jordanian website al-Kawn. The Abu Ubaida who was killed has not been positively identified as the Dutch prison master, but he has been described as an IS security chief in Aleppo. His executioners reportedly believed he had provided information to British or other western intelligence services.

Relative to population, Belgium is the European country that has supplied the highest number of jihadists to Syria. At least 59 of the 385 Belgians registered by researcher Pieter van Ostaeyen as being active in Syria or Iraq are connected to the Belgian extremist group Sharia4Belgium. The number is likely higher, as only about 113 of the Belgians have been fully identified.

A trial in Antwerp

ISIL moved several western hostages from Raqqa to a holding facility east of Aleppo only weeks before the failed US...