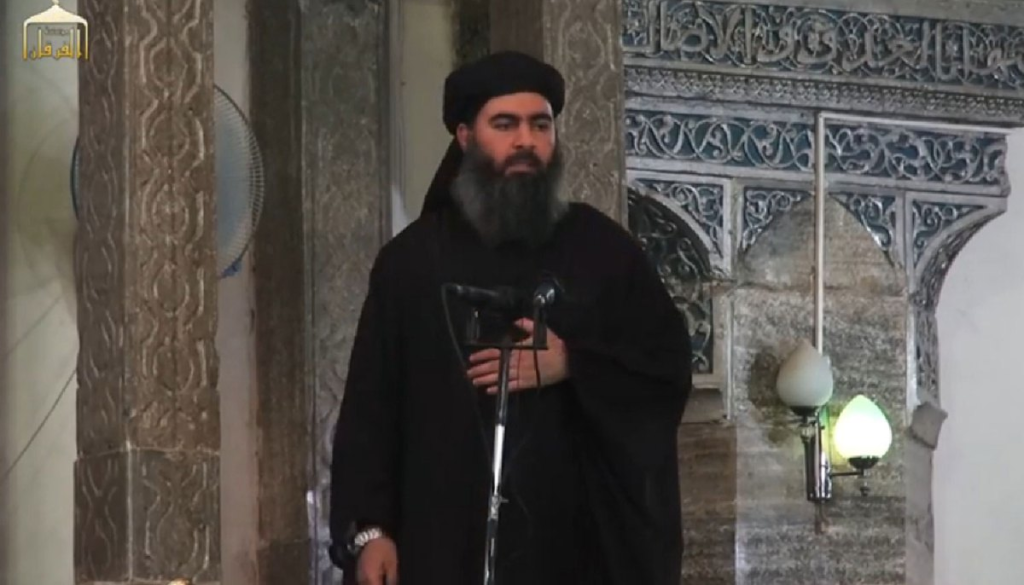 THE ENIGMATIC CALIPH: How long will Abu Bakr al-Baghdadi be able to survive on the run? What power base will he succeed in establishing in the Middle East? The ISIL commander came out of hiding Friday 4 July, leading the prayer in a mosque in Mosul, Iraq. A recording of the appearance was published by ISIL the following day.

ANALYSIS: With several national intelligence services using all their resources to hunt him down, the self-declared “caliph” Abu Bakr al-Baghdadi needs to maintain the fighting spirit of his mujahedeen force while establishing his new power base.

RAQQA CITY, a day in May 2014: For the armed jihadists assigned to guard the meeting and the streets outside, it’s an awkward sight: A trio of burka-clad women entering the building and taking seats around a table to discuss important matters.

As the guards know well, sharia rules imposed by the Islamic State of Iraq and the Levant (ISIL) prohibit women from raising their voices or walking in the street without escort by their legal guardian. However, the guards also know that images can deceive. From the way the burkas move, they sense that no women are actually present. The Iraqi commander who organized the meeting, Abu Ali al-Anbari, has given clear instructions. The fighters are to keep their distance.

Later, after the three people in burkas leave the building and drive away, al-Anbari summons his trusted commanders.

“Do you know who we just had among us?” al-Anbari asks. It is a rhetorical question, and he doesn’t wait for an answer. “Al-Baghdadi. Abu Bakr al-Baghdadi was one of the three men wearing burkas.”

For the last two months, even leaders high in the ISIL hierarchy have been in doubt. High-level sources inside the jihadist militant organization tell Hate Speech International (HSI) of widespread fears that ISIL’s trusted commander in chief, Abu Bakr al-Baghdadi, was dead. To illustrate how security precautions have heightened the sense of concern over al-Baghdadi’s fate,  they described the meeting in Raqqa in May.

Had ISIL’s leader been assassinated? Was Abu Ali al-Anbari telling the truth? Or had there in fact been a coup? Even while giving speeches to his troops, al-Baghdadi has made a rule of wearing a mask. He and his commanding officers are afraid of being observed by a satellite or enemy drone, with a potential missile attack to follow.

The fear is not completely ungrounded. After seizing Mosul, Tikrit and other large areas in Iraq while holding onto vast tracts of northern Syria, ISIL has become a major threat to the stability of the Middle East, if there ever was such a thing. Being secretive about the death of key leaders is nothing new to ISIL. When the military commander Hajji Bakr was killed in combat in January, the senior council in ISIL decided his death should be kept secret as long as possible. It was more important to maintain fighting morale and loyalty in an organization susceptible to internal power struggles and other strife. But after indications that the news of Hajji Bakr’s death had been leaked, the organization finally decided to go public, on February 2.

ISIL has been denounced by al-Qaeda, and has been in opposition within the jihadist community since the days of its founder Abu Musab Al-Zarqawi. Zarqawi built the organization in Iraq and always diverged somewhat from the strategy and methods of Osama bin Laden and the upper ranks of al-Qaeda.

When interviewed by HSI, Jordanian researcher Abu Hassan Hanieh, a political analyst and expert on Islamic groups, said: “The impact of Abu Musab al-Zarqawi is stronger than that of Osama bin Laden.” Zarqawi sought to ignite sectarian conflict in Iraq, and was responsible for a number of brutal terror attacks targeting Iraqi Shia Muslims, while he also increased the use of suicide bombings and car bombs, a strategy of extreme violence that was contrary to the al-Qaeda leadership’s strategic vision at the time.

The strategy of exploiting the Sunni-Shia sectarian conflict in Iraq was a key element of ISIL’s lightning offensive in June. Without the help of different Sunni groups, ISIL’s military advances in Iraq, which took only a few weeks, would probably have been impossible.

In a video posted online on Saturday, al-Baghdadi is shown speaking at the Al-Nouri Mosque in Mosul and asking Muslims to obey and support a new caliphate, the new Islamic State (IS) declared by ISIL and al-Baghdadi on 29 June. It was also a speech to boost the fighting spirit of the mujahedeen attract additional recruits.

For days we have seen an apparently coordinated offensive against known ISIL camps and bases in both Iraq and Syria. As reported by HSI, ISIL claims US and Jordanian involvement in what appear to be massive attacks organized by the Syrian Armed Forces at Camp Sheik Osama bin Laden in Raqqa. Raqqa also serves as the headquarters for ISIL operations in the areas conquered by the group in Iraq and Syria.

When mounting the steps to the pulpit in the mosque in Mosul to lead the Friday prayer, Abu Bakr al-Baghdadi could be seen limping. That may suggest a recent injury, possibly explaining why he has been absent from the daily command of his troops. The release of the recording immediately sparked claims by the Iraqi government that the footage was false.

“We have analyzed the footage … and found it is a farce,” an Interior Ministry spokesman, Brig. Gen. Saad Maan, said, according to Reuters. The spokesman also claimed that the Iraqi military wounded Baghdadi in an air strike on Friday, and that Baghdadi left for Syria to get medical treatment. Other sources have insisted that the recording released by ISIL actually shows Abu Bakr Al-Baghdadi, but rumors continue along with reports and claims that Abu Bakr Al-Baghdadi might have lost his life in an air strike by Iraqi forces near Al Qaim in Iraq on Sunday morning. “Who was the imposter in the recording?” some ask.

Claims of the death of Abu Bakr al-Baghdadi are not new. On Twitter, a picture has even been circulated of a dead person with a striking resemblance to Baghdadi. The picture is said to have been taken in Egypt, of a real corpse. Is the photo a trick? Are the rumours coordinated? The protocols of an intelligence agency chasing a high-value target would prohibit no such tactic. By sowing confusion about whether a leader is alive, intelligence operatives can force him to make a public appearance. When he does so, it is easier to locate, track and target him.

Abu Bakr al-Baghdadi, if alive, is living on borrowed time. When ISIL took over Mosul and reportedly looted the city’s main bank of USD 429 million, then declared itself a state entity, it sparked a manhunt. To dismantle an organization, you go after its leader. But there are some obvious challenges. The hesitancy of the United States and Jordan poses great challenges to the formation of a new “coalition of the willing” against the proclaimed reign of the Islamic State (IS). In trying times, one often sees new and unlikely partnerships. The enemy of one’s enemy is a friend – as many state leaders come to recognize.

Two allies in the new war against ISIL are Iran and Syria. Dealing with Iran and Syria may lead outsiders into a minefield. But in the world of practical politics, it may take temporary partnerships among old enemies to put a stop to the establishment of a new state ruled by an organization too extreme even for al-Qaida.

The reports out of Syria suggesting the possibility of US assistance in the well-organized attacks on ISIL camps in Raqqa by the Syrian Armed Forces and the Syrian Air Force remain unconfirmed. HSI contacted the US Central Command (CENTCOM) for comment on Saturday, but as yet the US military has provided no information. If it assisted in the attacks, directly or indirectly, the motivation is obvious and logical. But the political fallout of helping Syrian President Bashar al-Assad, even to eliminate ISIL, could be tremendous. An announcement from the Pentagon one way or the other should not be expected anytime soon. Unless its hand is forced.

The military advances made in recent days by the Syrian and Iraqi armed forces appear strikingly coordinated. I have been a reporter covering military affairs and the intelligence community for a couple of decades. This dual offensive is too sophisticated in its timing to be random. At a bare minimum, someone is doing an effective job of liaising and exchanging intelligence among ISIL’s various adversaries in Syria and Iraq.

That is bad news for ISIL and Abu Bakr al-Baghdadi. Certainly he will not die a natural death, and it is unlikely that he will manage to survive as long as Osama Bin Laden did as a fugitive. The question is this: Will al-Baghdadi stay alive under his burka long enough to establish ISIL as a permanent force that could change the power balance in the Middle East?

Military forces in recent days have repeatedly attacked a Syrian ISIL training and military camp named after Osama Bin Laden, according to eyewitnesses....