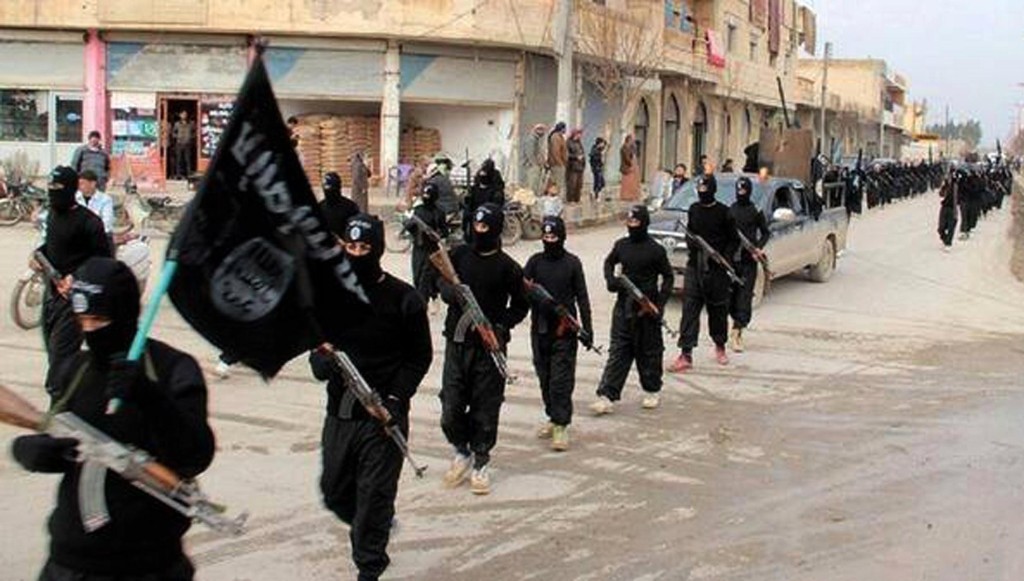 ENTERING RAQQA: Jihadist fighters from ISIL entering into Raqqa in January 2014, after fierce fighting between ISIL and Jabhat Al Nusra.

Military forces in recent days have repeatedly attacked a Syrian ISIL training and military camp named after Osama Bin Laden, according to eyewitnesses. Two assault team members were said to have been killed in one of the raids, along with at least five and probably many more Islamist militants defending the camp outside Raqqa in northern Syria.

Several ISIS commanders were said to have been captured and/or wounded.

A major attack also took place on Friday morning. That raid involved planes and helicopters as well as troops who parachuted and deployed onto the ground. A local reporter working for Hate Speech International (HSI) witnessed parts of the assault at a distance.

High-ranking sources within the Islamic State of Iraq and the Levant, or ISIL, later confirmed the air raid. One of them said elements of the US and Jordanian militaries appeared to have assisted in the attack. A US military spokeswoman declined immediate comment.

Speaking to HSI on condition of anonymity, the ISIL representatives said the primary target of the assault appeared to be anti-aircraft missiles in the militant group’s possession and stored at the facility that was attacked. Recent photographs published by ISIL also suggest that the group has obtained Scud missiles. It is unclear whether they are operational.

The base under assault, Camp Sheik Osama Bin Laden, was named for the al-Qaeda founder and mastermind of the 2001 attacks on New York City and Washington, D.C., that killed almost 3,000 people and led to more than a decade of war.

One ISIL source, a close associate of the ISIL commander in the Raqqa region, told HSI that two members of the attacking force were killed. Both were said to be among the military commandos who parachuted to the ground.

The source said that evidence found on the two bodies indicated that the attacking force consisted in part of private contractors, or “mercenaries”, assisted by US and Jordanian military elements.

It was unclear whether any anti-aircraft missiles or Scud missiles were destroyed in the raid.

HSI has not been able to verify the information through independent sources. It was also unclear what kind of evidence ISIL claims to have obtained. In the Syrian conflict, unsubstantiated and false claims are often made for propaganda purposes.

Traffic from several Twitter accounts normally associated with ISIL, or closely following the radical groups in Syria and Iraq, made reference on Friday to the attack. One Twitter account, carrying the logo of ISIL, said at least five ISIL fighters were killed.

Tweets from several Twitter accounts said the United States and Jordan had organized and orchestrated the attacks. One Twitter user called @Paradoxy13, wrote: “According to al-Quds, soldiers with US & Jordanian insignia dropped from a stealth helo stormed an ISIS training camp in Ukayrishah, #Raqqa“.

The Twitter accounts made no reference to the reported killing of two of the attackers. Established ISIL media channels had not mentioned the attack early Saturday morning. Other Twitter accounts, owned by individuals normally loyal to President Bashar al-Assad, claimed the attacks were carried out solely by Syrian Armed Forces and the Syrian Air Force. One account claimed the body count of militant islamists to be approximately 300. This number had by Saturday afternoon not been confirmed by any official sources. A detailed report from Global Research suggests that the operation, which still is ongoing, is being carried out by Syrian Armed Forces.

The camp sustained heavy damage in the attack. It is situated in a mountainous area about 30 km outside the northern Syrian city of Raqqa, which has been an ISIL stronghold since the extremist group regained control of it earlier this year. According to local and ISIL sources, the military attack against the camp lasted for two-and-a-half hours.

Following the attack, ISIL commanders gave orders to evacuate other major ISIL military camps inside Syria, HSI has learned. Heavy weapons, strategic weapon systems and soldiers were quickly evacuated from at least three camps in and around Raqqa and Aleppo, sources told HSI reporters in Syria.

If the ISIL claim about US and Jordanian involvement in a direct military attack against the group inside Syria were to contain any truth, it might indicate a major shift in the fight over the strategic balance in the Middle East. While the attack was taking place outside Raqqa, Iraqi forces had started a similar air campaign against ISIL in Iraq, according to media reports.

The Obama administration has been hesitant to get caught up in a new military ground campaign following the withdrawal of US troops from Iraq. After ISIL seized the cities of Mosul, Tikrit and other areas of Iraq in June and declared a caliphate or Islamic state there, the US has not openly responded by military means apart from sending up to 300 advisers to Iraq.

HSI sought comment from the US Central Command (CENTCOM), based in Tampa, Florida, but a spokeswoman there said she was unable to provide information about the alleged air raid in Raqqa before the publication of this story. But she said that the request would be “sent up the chain of command”.

Jordan, for its part, has maintained a restrained role towards extremist groups such as ISIL and Jabhat al Nusra and towards the war in Syria in general. According to a report from the newspaper Al Quds, Jordan denies any involvement in the reported attacks against ISIL in Raqqa and other parts of Syria. Sources told Al Quds that several of the attackers spoke English during the raid.

The Hashemite kingdom’s strategy of containment has succeeded in securing a high level of security inside its own country. Jordan works closely with the United States, which offers it intelligence, practical assistance on preventive security and military advice. The US embassy in Jordan is one of the largest US foreign stations in the Middle East.

In addition to destroying weaponry, a military strike on the Raqqa camp could be an attempt to reduce ISIL’s ability to recruit new fighters to its growing army of mujahedeen. Bruce Hoffman, who heads the Center for Security Studies at Georgetown University in Washington D.C., recently told NPR that ISIL, which now controls about a third of Iraq, has a sophisticated program in northern Syria.

“Around Raqqa and elsewhere, they’ve established very large training camps that are capable of absorbing these foreign fighters and putting a gun in their hand and giving them the kind of training and experience and confidence that puts them into battle very quickly,” Hoffman said.

EU earthquake? Not quite
The quest for the caliph(ate)

ANALYSIS: The European Elections were not the watershed victory for the far right that the media makes them out to...