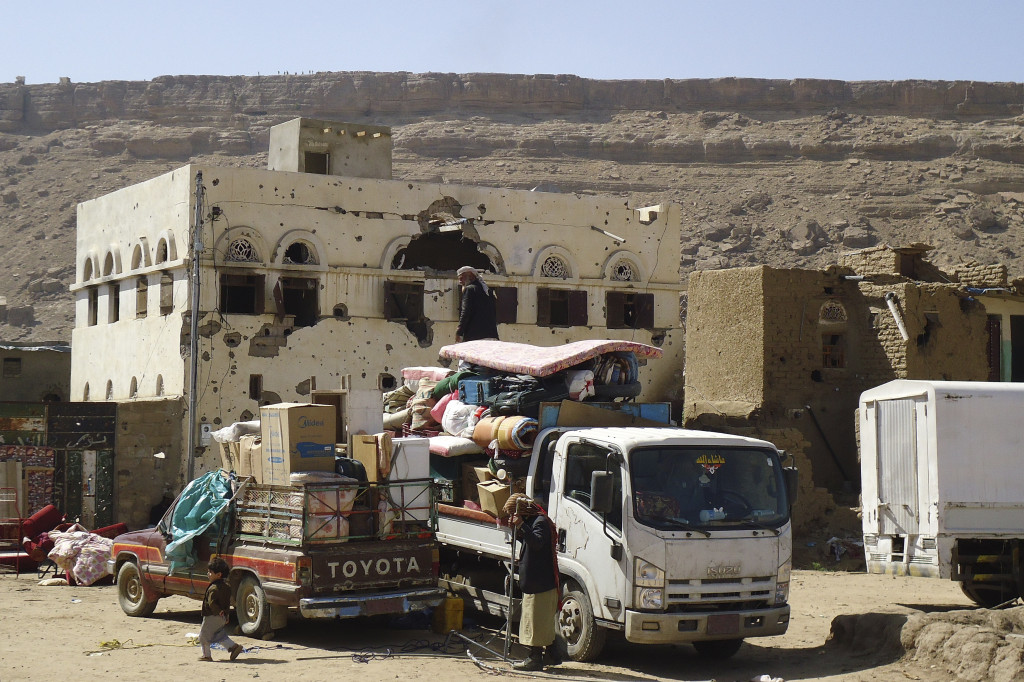 FORCED TO MOVE: Belongings are loaded onto a truck from a house damaged during recent clashes between Salafis and Shi’ites in Dammaj of the northwestern Yemeni province of Saada January 14, 2014. A group of ultra-orthodox Sunni Muslims have been forved to move out of their northern stronghold, under a truce to end months of sectarian clashes with Shi’ite Muslim Houthi rebels. PHOTO: Reuters

YEMEN: Roughly 10,000 Salafi Sunni Muslims have been forced to abandon their homes in northern Yemen’s town of Dammaj and flee to rough conditions and cold nights in the capital due to an on-going armed conflict with a Shiite sect called Houthi Shia.

An official report to Yemeni national health authorities dated 14 January 2014 that was obtained by HSI says 199 people were killed, including 29 children, and 594 injured in the latest 100 days of a conflict that began in late 2011. The report said another 49 women suffered miscarriages during the period.

“The status quo is that people in this region have entered the zone of human catastrophe in the real sense of the word,” said a December version of the same report, signed by Dr Ahmed Saleh al-Wadaii, head of the local hospital.

The Salafi, who follow a strict interpretation of Sunni Islam, fled to the capital under the terms of a government-brokered cease-fire reached in early January. They were led by Sheikh Yehia al-Hagouri, head of the Salafi in Yemen.

Many are now living outdoors around another Salafi centre in Sawan, south of the capital city of capital city of Saana, at a time of year when night temperatures dip to 8 degree Celsius.

The conflict, in part, is over an influx of Salafi Muslims and foreign students to study at a Koranic centre that opened in 1979 in Dammaj, in Saada province of northern Yemen.

The centre includes the Dar al-Hadith madrasa, or Islamic religious school, established by the late Sheik Muqbil bin Hadi Al-Waadi’i, founder of the Dammaj Salafi movement. The centre’s students, many of them foreigners, make up about 25 per cent of the town’s population of 15,626 according to the last official census, from 2004.

The Houthi have accused the Salafi of turning the centre into “a real barracks for thousands of armed foreigners,” the AFP news agency reported this month.

The educational centre is highly respected by Salafi throughout the Arab world and has draw tens of thousands of students over the years; including Afghans, Europeans, Chechens, Arabs and Africans, often recent converts to Islam.

However, sources, speaking on the condition of anonymity, told HSI that U.S. diplomats in Yemen fear that Western youths who attended the Salafi centre in Dammaj might form or join terrorist groups when they return to their home country.

Both sides in the Dammaj conflict agreed to allow a government-appointed commission to seek a peaceful settlement to the conflict, which has flared up repeatedly.

The cease-fire document dated 5 January 2014 says the Salafi had to leave the Saada province within four days in an effort to end fighting that had spread to several fronts and provinces.

The displaced Salafi have barred photography and interviews for security reasons. However, reporters were invited to a recent 20-minute news conference by the Salafi group’s spokesman, Sorour al-Wadi’i.

Al-Wadi’i said the Salafi Sunni left Dammaj at the request of Yemeni President Abd Rabu Mansour Hadi, himself a Sunni, so he could provide protection and stop the fighting.

Most headed for the capital, where trucks laden with everything they could carry – including weapons – crowded the streets around the Salafi centre in in Sawan. Salafi women could be seen huddled on the ground, wearing only their Afghan-style clothing. Five tents of 10-15 square meters in size were reserved for women and nursing babies. Older children were scattered around on the sidewalks.

They were largely silent, almost as if these people, many who had only known an ancient lifestyle in their hometowns, were stunned by their new circumstances in the city.

Nearby, in a shopping area, dozens of young men, including two – one armed with a Kalashnikov style automatic weapon – who agreed to speak on the condition of anonymity.

“They blew up our homes with cannons and Katushya rockets. We had no choice but to leave our homes and schools or we would have been killed,” one of them said.

The Saada province is mainly populated by members of Houthi Shia, which has adopted the Iranian revolutionary slogan “Death to America, Death to Israel, a curse upon the Jews, Victory to Islam.”

In 2007, about 100 Jewish residents fled the Saada province after receiving death threats in a letter signed by a Houthi representative, news reports at the time said.

The Houthi claimed to have recently found documents in Saada linking Dar al-Hadith, the Dammaj Salafi school and the Salafi to the al-Qaeda terror network.

In November, the Reuters news agency reported that the Salafi at the school “previously distanced themselves from al-Qaeda and criticized Osama bin Laden, but the seminary has also educated Muslims who later became prominent militants.” That report also said al-Qaeda had publically vowed revenge on the Houthi who fought the Dammaj Salafi.

Tawfik al-Sharabi, a scholar who studies Islamist groups, told HIS that he believes the Dammaj conflict is much broader that a regional sectarian dispute. He suggested it was more global, with direct links to the war in Syria and tensions between Saudi Arabia and Iran. He claimed others forces, without identifying them, might be orchestrating the conflict.

The Yemen Post newspaper has said the Houthi are believed supported by heavily Shiite Iran while the Salafi are see as being supported by factions in neighbouring Saudi Arabia, which has Salafism as its national religion.

In northern Yemen, the Houthi had six, civil war-like conflicts with the army of the Sunni-led government between 2004 and 2011, a period in which the Shiite movement peacefully coexisted with the Salafi of Dammaj. The government of former President Ali Abdullah Saleh, a Sunni, claimed the Houthi wanted to overthrow it with Iranian backing, while the Houthi said they were only protecting their region from government discrimination and persecution.

The conflict between the sects began in Saada province in 2011, during an anti-government uprising in northern Yemen now often called the Shiite Insurgency, or the Houthi Rebellion. Many Salafi fought for the Sunni-led government against the Houthi.

The fighting spread to other parts of northern Yemen, including three neighbouring provinces: Amran, Al-Gouf and Haggah, resulting in hundreds of deaths and injuries, as well as widespread destruction and displacement.

Efforts to stop the violence failed repeatedly and the latest round of fighting began on 29 October 2013, when the Houthi shelled a Salafi mosque and school at Dammaj, claiming they feared an offensive by about 4,000 Salafi there.

Each side has blamed the other for the on-going violence.

Al-Wadi’i, the Salafi spokesman, claimed the Houthi sought to eradicate peaceful students who had only come to study theology in Dammaj and that the Yemeni government did not step in to help, forcing the Salafi to leave.

Mohamed Abdel Salam, spokesman for the Houthi Movement, blamed the Salafi in an interview with HIS, saying they had incited violence and issued fatwas against the Houthi. He also accused them training foreigners, including al-Qaeda elements, for combat as well as theology.

Yehia Abu Esbaa, head of a presidential committee that brokered the latest cease fire, said by telephone that the Houthi has now turned over border areas to the Yemeni military, but still retained control of other areas.

In the meantime, the Houthi reportedly seized key areas in the Khattaf region of the Saaba province, including what is believed to have been a key Al-Qaeda training camp in Yemen, called Wadi Al-Gabara, opened in the 1980s under the under the personal supervision of Osama bin Laden, the late leader of the terrorist group.

The Houthi claim to have found documents and information related to al-Qaeda activities, links to intelligence services and details of terrorist operations by al-Qaeda in Yemen and other countries. However, no details from the documents were immediately available.

Yemeni fury over US raid

From Sinai, with hate
Knife threat tied to SDL chief

CAIRO – With violence engulfing Cairo over the weekend, the Egyptian military never took its eye off of the northern...