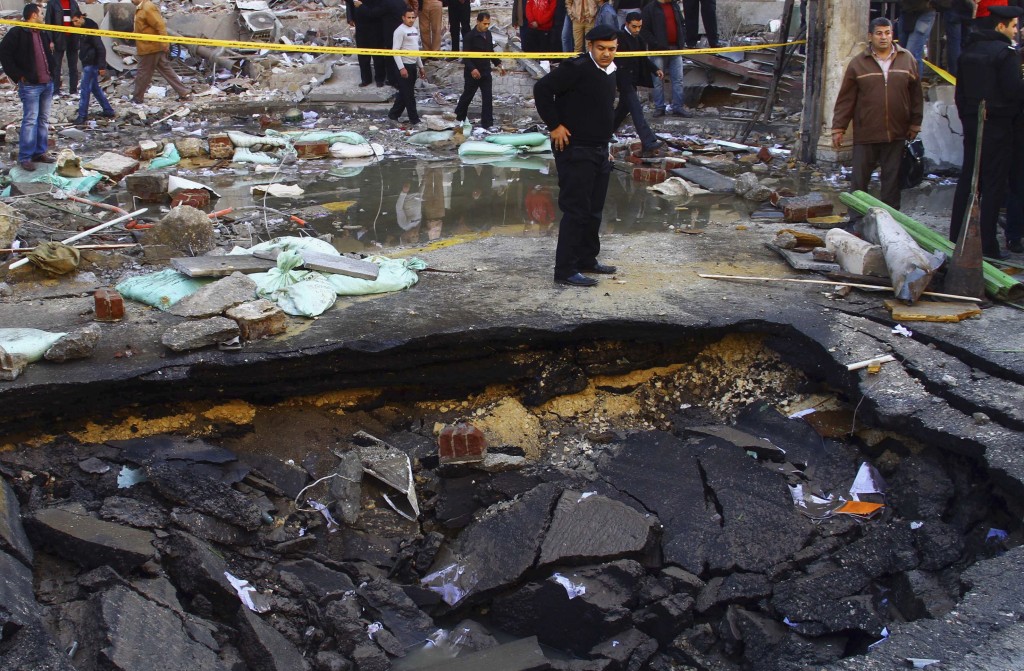 CAIRO – With violence engulfing Cairo over the weekend, the Egyptian military never took its eye off of the northern Sinai Peninsula, 300 kilometres to the northeast. It’s a lawless, angry place, and the home of Ansar Beit Al-Maqdis.

Ansar Beit Al-Maqdis (“Defenders of Jerusalem”) arose in 2011 in the power vacuum that spread across Egypt with the fall of Hosni Mubarak. Until recently, it had operated mainly in its home desert, near the Hamas-controlled Gaza Strip. But if its latest claims are to be believed, Ansar Beit Al-Maqdis has the capital firmly in its sights and has acquired anti-aircraft missile capability.

As thousands of Egyptians poured into Cairo’s streets on Friday – a day before the third anniversary of the revolution that ousted Mubarak – many analysts feared violence by the vast Muslim Brotherhood, whose hold on presidential power from 2012 to 2013 was cut short by a military takeover.

Sure enough, four explosions rocked Cairo and environs. The primary blast, reportedly a suicide car bombing, caused four deaths and 75 injuries in front of the security directorate in downtown Cairo. But instead of the Muslim Brotherhood, it was the Sinai-based Ansar Beit Al-Maqdis that claimed responsibility.

“Done, thanks be to Allah,” the group said on Twitter. “The Cairo police headquarters has been successfully targeted as a den of Western allegiance and criminality. May the Lord receive our brother in heaven. Let the infidel army and police forces know that we shall continue to destroy your fortresses.”

The next day, as Cairo’s Tahrir Square once again filled with celebrants, an Egyptian military helicopter with five soldiers aboard was dispatched to take part in an operation against militants in northern Sinai. According to military spokesman Ahmad Ali, it crashed near the village of al-Kharruba.

Security sources said the helicopter sustained a missile attack. And on Monday, Ansar Beit Al-Maqdis posted a YouTube video showing what it claimed was one of its members launching a shoulder-fired anti-aircraft missile at an army helicopter. In the video, laced with inflammatory text and speech, the helicopter appears to explode in flames and crash to the desert floor.

Sinai: a root of militancy

According to knowledgeable tribal elders in the Sinai, Ansar Beit Al-Maqdis arose in 2011 when Palestinian jihadists and members of an older Sinai group, Tawhid wal-Jihad (“Monotheism and Holy War”), joined forces in the city of Al-Arish in northern Sinai.

In addition to Palestinian and Egyptian elements, the Sunni group has members from Lebanon, Iraq and Afghanistan. It consists of two divisions: The first is Palestinian and operates in the Gaza strip; the second is in Sinai. One of its top leaders is Shadi Al-Mone’ie, who heads the most-wanted list of terrorists in Sinai, following his alleged involvement in a number of attacks targeting the army and police in Sinai.

When Islamists took power in Egypt through the Muslim Brotherhood in June 2012, under the presidency of Mohamed Morsi, the Sinai bombings continued, but at a slower pace. That November the group claimed responsibility for a rocket attack that targeted the southern Israeli city of Eilat. It released video footage explaining how that attack had been carried out, and it later fired two rockets at a fuel storage facility at Eilat.

In October 2013, it claimed responsibility for a bomb attack on the intelligence office in Ismailia in which one civilian was killed and 10 injured. Two weeks later in Cairo, it was behind a failed assassination attempt on Egypt’s interior minister, Mohamed Ibrahim, that killed a policeman.

On 29 December, the intelligence office in Al-Sharqiya province was targeted in a bombing that injured four civilians. The bloodiest operation for which Ansar Beit Al-Maqdis has claimed responsibility was an attack in its own neighbourhood ­– on an army truck transporting soldiers in the city of Rafah on November 20, 2013. A dozen or more soldiers were killed and 37 injured.

“We shall strike their necks”

Earlier this month, following the death of two of the group’s members in Egyptian prisons, the group pledged revenge against the police. “We shall have revenge on the murderers responsible for their deaths, and we shall strike their necks,” it said in a statement.

On Thursday, ahead of the weekend eruption of violence, the group is thought to have attacked a police checkpoint in Bani Suef south of Cairo, killing four policemen. The group announced that it was behind that operation in an online statement.

The organization’s beliefs are based on two concepts: First, the worship of Allah without partner, proselytizing in Allah’s name and classifying as infidel anyone who does share this belief; and second, forbidding polytheism and considering all who do not believe in that prohibition to be an enemy. Some analysts consider Ansar Beit Al-Maqdis to be a fundamentalist group of a particularly extremist and bloodthirsty nature.

The group rejects democracy and considers Egypt’s interim ruler, Adly Mansour, an infidel because he does not implement Islamic Sharia law. It insists on calling its terrorist operations “conquests,” a term used by Muhammad in his wars against the enemies of Islam in the 7th century.

Ansar Beit Al-Maqdis owns a fleet of stolen cars and its members are skilled in modern communications. Its members consider Sinai the Holy Land in which God spoke to Moses, and they consider the Egyptian people “infidels” until they repent of “civilization” and “democracy.” Representatives of the group issued warnings to army and police personnel to abandon their jobs following a bombing that targeted Dakahlia police headquarters in December 2013, killing 16 and injuring 200.

The group is thought to obtain funding from trading in stolen cars and smuggling arms that come from Sudan and Libya to Gaza trough the tunnels, in addition to armed robbery of banks and jewelry stores, as well as the smuggling of Africans illegally into Israel.

5 Responses to From Sinai, with hate

American anti-gay activists play a role in promoting anti-gay legislation around the world. Øyvind Strømmen Like a number of other...