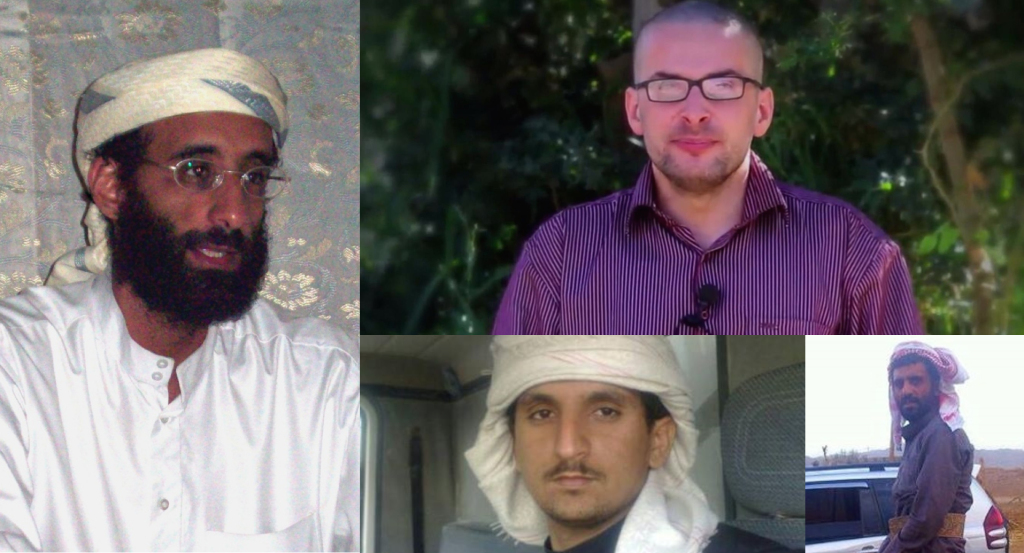 HOSTAGE RESCUE ATTEMPT: An Al Qaeda hostage in Yemen, US photojournalist Luke Somers (top right), was held by the tribe of the former AQAP leader Anwar Al-Awlaki (left). Both Somers and a South African hostage were killed in the rescue attempt, as well as several Al Qaeda members, among them two brothers and members of the Al-Awlaki tribe in Yemen (bottom center and right). PHOTOS: AQAP video, Wikipedia commons, AQAP twitter account.

Luke Somers and Pierre Korkie were held hostage by the Al-Awlaki tribe in Yemen. “Poor operational planning of the US rescue raid caused the death of the hostages,” a high-ranking security official in Yemen said.

Neither the Yemeni Counter Terrorism Unit nor the Ministry of Defense in Yemen were informed or consulted before the US military raid in Yemen on Friday, attempting to rescue US photojournalist Luke Somers and another hostage, who later proved to be South African teacher Pierre Korkie, security sources in Yemen told Hate Speech International (HSI).

A source within the counter terrorism unit who was involved in investigating the event, and who spoke on the condition of anonymity, said local villagers have claimed that at least one US Navy Seal Team operator was killed and possibly another either wounded or killed in the assault. HSI has not been able to obtain comments from US sources on the claims. However, Yemeni government sources initially and wrongfully also claimed Luke Somer had survived the US hostage rescue operation.

One of the two special forces attack teams allegedly set up an outer perimeter while the other carried out a direct assault against the building where intelligence had suggested the hostages were held.

“The helicopter of the attacking force landed too close to the Al Qaeda compound, resulting in the immediate discovery of the rescue attempt. What then followed, was a two hour shoot-out between the US special forces and Al Qaeda members,” a security official said. In a quavering, angry voice, he added: “This was a completely outrageous and stupid operation. A mature military unit would never carry out an attack like this. This operation was extremely poorly planned.”

According to both tribal and security sources in Yemen, the two hostages, Somers and the South African teacher Pierre Korkie were held by the tribe of former AQAP leader Anwar Al Awlaki. Awlaki, a US citizen, was killed in a US drone attack in northern Yemen’s al-Jawf province on September 30, 2011.

At least five of the Al Qaeda members who were killed during the US assault were family members from the Al Awlaki tribe, among them Saleh Mubarak Alhawad Al-Dagari Al-Awlaki and Jamal Mubarak Al-Dagari Al-Awlaki, who were brothers. Pictures of the two were later published by an AQAP affiliated twitter account.

Senior US officials told AP news agency that they believed both hostages were shot and seriously wounded as the raid unfolded.

Both hostages are said to have been alive when US forces rescued them, sources told AP. Somers and Korkie were pulled onto a helicopter and possibly then a plane which flew to a nearby US naval ship. Korkie is believed to have died during the the transport, while Somers died on the USS Makin Island, according to the AP account.

Korkie’s employer, the relief group Gift of the Givers, released a statement Saturday that said Korkie was to be released the next day. This was a fact that might have been missed by the White House, according to news reports. A senior State Department official later admitted to CNN that the Obama administration assessed that there were two individuals at the location but did not know one was South African or that negotiations were under way for his release.

Two children, an old man and other civilians also lost their lives in the assault, a source in the Al Awlaki tribe claimed to HSI. The source provided HSI with a detailed name list.

According to US Defense Secretary Chuck Hagel, the military raid was ordered by President Barack Obama following a ransom demand followed by a 72-hour deadline from Al Qaeda in the Arab Peninsula (AQAP). The announcement was made in a video recording on which one of the hostages, US photojournalist Luke Somers, pleaded for his life.

“There were compelling reasons to believe Mr. Somers’ life was in imminent danger,” Hagel said in a statement from the US Department of Defense. Contrary to the accounts from Yemeni sources, Hagel characterized the US hostage rescue operation as “extremely well executed”.

In his statement the secretary added that “the rescue attempt took place in central Yemen and was conducted in partnership with the Government of Yemen”.

“I thank President Hadi, the Yemeni government, and Yemen security forces for their assistance and cooperation,” Hagel said.

The differing accounts on whether or not the Yemeni authorities were informed or consulted by the United States in advance of the hostage rescue operation could possibly be explained by the current split of power in Yemen.

On the one side the Muslim Brotherhood, supported by President Abd Rabuh Mansur Hadi, on on the other the Houthis, supported by the former President Ali Abduallah Saleh, control different ministries in Yemen.

HSI has made numerous attempts to reach the US Department of Defense for further comment, but received no response to questions submitted by phone and in a separate email.

Hunt for America’s spies
The Shots in Brussels

Islamic State (IS) security patrols have repeatedly raided Internet cafes in Raqqa and Deir Ezzour in Syria, hunting for America’s...