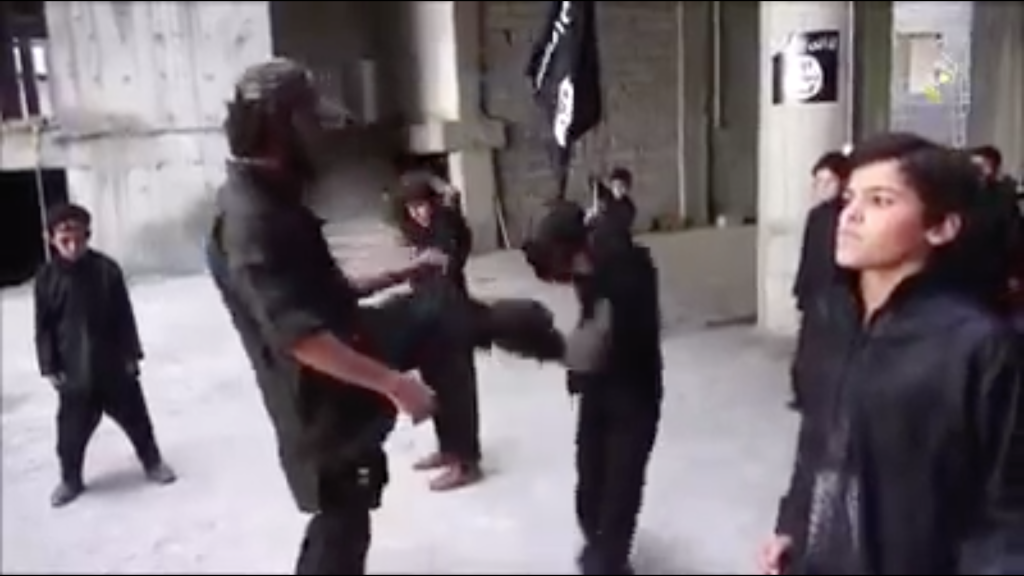 TRAINING CAMPS: The Islamic State (IS) has established several training camps designated for child soldiers recruited in Syria and Iraq. The extremist organization is now building an army of children. PHOTO: IS propaganda video.

The Islamic State (IS) is reportedly building an army of 11- to 16-year-olds, under the command of a French 15-year-old, sources tell HSI. The extremist group may be considering deploying the child army to the battleground, in order to make it harder for the US to carry out air strikes.

Senior leadership of the Islamic State (IS) was quick to make recruiting children for propaganda and military purposes a high priority. Many children are believed to have been recruited by the extremist group to spy on residents of cities and villages under IS control, in some cases leading to capture, torture and even killings, a variety of sources told HSI. Sources in Syria spoke on the condition of anonymity, due to fear of reprisals from the IS.

In late 2013, IS established a project called Ashbal al-Zarqawi – which means “The Small Lions of al-Zarqawi” (named after IS founder Abu Musab al-Zarqawi), which led to an increase in the training and organization of child soldiers, Hate Speech International (HSI) sources and news reports say. IS has released several video recordings displaying the child soldiers of the organization (see below for an example).

Sources in Raqqa, close to IS fighters involved in the training of children, have told Hate Speech International that the Islamic State now has moved this project into a new phase, with plans for a child army of 11 to 16 year olds.

A French 15-year-old is believed to have been appointed commander for the child soldiers, although HSI sources in Syria were unable to confirm his identity or give an estimate of the expected size of the child army.

Any child army, of any size, would constitute a serious violation of international law and the UN Children’s Convention.

At first, the IS seldom recruited children under age 14 for combat. However, sources in Syria say the terror group’s ranks have been depleted by U.S.-led air strikes and desertions in recent weeks. Some foreign IS fighters have been caught attempting to flee Syria, and were executed as an example.

Sources in Syria tell HSI that the IS may be considering deploying the child army to the besieged town of Kobani on the Syrian-Turkish border, or other areas where the organization is under heavy attacks. This could be part of a strategy to make it harder for the US and allied countries to launch air strikes, because of the risk of killing children. Child soldiers have already been sent to Kobani – or Ayn Al-Arab in Arabic – and, as reported earlier by HSI, at least one child soldier has committed suicide on the battlefield due to mental stress. On October 8, HSI reported that more than 30 children had been killed in the battle for Kobani in just four days.

Many schools in Raqqa city and the towns of Alhab, Ezaz and Jerablous have been used as military training camps for children, with some children carrying out executions and torture, local sources told HSI on the condition of anonymity.

Sources in Syria have identified two IS jihadists responsible for coordinating much of the IS work to recruit children.

One is a 24-year-old who has an ailment that makes him look like a child and who is in charge of the child recruitment in Raqqa, one source told HSI.

The other is a 19-year-old from the town of Ezaz near Aleppo. He worked in a local pharmacy until mid-2013, when he became one of the security leaders of IS in Ezaz. Former prisoners of IS claim that he advanced in the ranks by participating in repeated torture of prisoners.

What hate speech is, and isn’t
Hunt for America’s spies

What hate speech is, and isn’t

Hate speech isn’t online "trolling" or bullying. Important distinctions must be made about an online culture that also includes debate,...